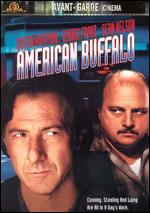 When you have award-winning actors performing award-winning material, you know you’ll get an intriguing movie. Such a movie is “American Buffalo.” Based on David Mamet’s Pulitzer Prize-winning stage play, “American Buffalo” is about three men planning a hastily put together robbery. As the day wears on and the plan, which was never that good in the first place, starts to fall apart, we see how the characters respond to stress. This is what holds the audience’s interest. Teach (Dustin Hoffman) and Don (Dennis Franz) are the primary characters here. There is also a third character, named Bobby (Sean Nelson), but he isn’t the primary attention-holder. The real gem is Teach, a philosopher of sorts who, one gets the impression, is not well liked by those around him. Hoffman does a great job at playing a man that many of us know, but probably would prefer not to.

“American Buffalo” is a very interesting movie. There are very few filmmaking techniques used here, as it’s really just a filmed version of Mamet’s play, thus making it more of a character study. But, when the characters are this intriguing, I have no complaints. The only complaint that anyone might have is the amount of profanity. Split between only three characters, this much cussing will be noticed by even the most callous of viewers. Other than that, it’s a fascinating movie about people that should be watched by anyone who enjoys acting at its best.