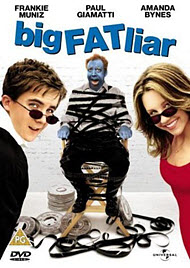 “What a man desires is unfailing love; better to be poor than a liar.” —Proverbs 19:22

The problem of being truthful is as old as the Garden of Eden. It is underscored in the Ten Commandments: “You shall not give false testimony against your neighbor” Deuteronomy 5:20. We have been told stories about the consequences of lying—such as Aesop’s fable “The Boy Who Cried Wolf” and the story of Pinocchio. It is no wonder that Jesus said “You shall know the truth and the truth will set you free” John 8:32.

In this likable February release from Universal Studios, Jason Shepherd (Frankie Muniz) is a “serial” liar. He always has excuses for homework, that is until he gets busted! He has one last chance to turn in a story or face the terror of Summer School (every student’s worst nightmare). As he is rushing to turn in his project he runs into the limo of Hollywood producer Marty Wolf (Paul Giamatti). But just when it appears that Jason will get his paper in on time, he accidentally leaves it in the limo. His teacher and parents will no longer believe Jason and there’s a final breakdown in trust.

During the summer, Jason sees a movie trailer based on his short story. The problem is no one believes him and suddenly realizes how his complete lack of truthfulness has created barriers in his relationship with Mom and Dad. Jason decides to go to Hollywood and have Marty call his father (you know, to set everything straight). This is the part of the film that is amazing. Jason’s motivation is not greed or fame; he simply wants his dad to believe in him again. Our hero is joined in this adventure by his best friend Kaylee (Amanda Bynes).

In the tradition of “Home Alone”, these two teens begin to plot a way to force Mr. Wolf to make the call. (By the way, Kaylee is not a girlfriend and there is a strong message of friendship here.) There are many other lessons to be learned in this light-hearted film. It is a great PG offering from Universal Studios. The main sub-plot resembles that of Veggie Tales’s “Larry Boy and the Fib From Outer Space”. I won’t be a scene spoiler, but I will let you see what you think on that point. There is plenty of material for parents to discuss with their kids and it is also a safe flic if you are just dropping off the youth for a matinee. My recommendation is: ENJOY!

Positive
Positive—My 9 year old son and I went to this movie because Count of Monte Cristo was sold out. And we are SO glad we did. This was a wonderful, clean, fun movie. I hope Universal continues to put out movies like this. The theatre was packed and everyone in the audience seemed to be thoroughly enjoying themselves. It will definitely be added to our very limited, picked-with-discretion DVD collection when it comes out!
My Ratings: [Good / 4]

Romaine, age 47
Comments from young people
Positive—I really liked this movie, it’s very similar to Home Alone. Its nice to have a break from all the violence etc. in other movies and just have a laugh!
My Ratings: [Good / 5]

Lexi, age 14
Positive—I thought it was good, I don’t remember any profanity or anything offensive. It was funny probably aimed for people around the age of 9-13 but it would be good for any age… I definitely recommend it to rent. But it was one of those movies that made me think “now why did you do that” but hey its a movie go see it!
My Ratings: [Good / 3½]

Jay L., age 12
Positive—There are only a few mild curse word (a couple h words and about 5 God’s name in vains) but other than that this is a great family movie but more for kids.
My Ratings: [Good / 2]

KE, age teen
Movie Critics
…Other than some questionable dialogue, Big Fat Liar can be recommended for ages 10 and up…