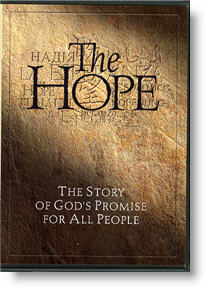 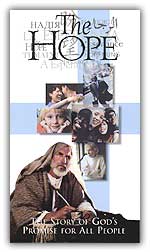 Matthew 24:14 states: “And the Good News about the Kingdom will be preached throughout the whole world, so that all nations will hear it; and then, finally, the end will come.” (NLT)

These are the words of Jesus Christ, the central figure of time, as recorded in the Biblical New Testament. Have you ever pondered what this verse could mean? “The Good News about the Kingdom”—the gospel of Christ—will be spread to all nations (literally “people groups,” not geographical boundaries). This great task has been virtually impossible until our generation today. As Jesus spoke these words, he was answering the question posed to him by his disciples “When will all this take place? And will there be any sign ahead of time to signal your return and the end of the world?” (verse 3, NLT).

“The Hope”, produced by Mars Hill in conjunction with a plethora of top-notch Hollywood productions compiled over the past two decades, is designed to play an integral part in bringing the Good News of the Kingdom to the nations. Digitally produced with the ease and ability to create a version in literally any language on the planet, this remarkable presentation lays out the entire Grand Plan layed out in the Bible. Starting in Genesis, “The Hope” visually teaches 36 key events of the Scriptures:

The format of “The Hope” is like nothing I have seen before. The American English version I viewed was set up like this: three film hosts—one Caucasian male, one Asian-American female, and one African-American male—narrated various parts of the story’s script while the events were unfolding on-screen. One at a time, the narrator would appear in the corner of the screen for a time, then fade out while their voice is still heard. The action on screen contained well-chosen clips from numerous big-budget Hollywood productions, namely Franco Zeffirelli’s “Jesus of Nazareth,” Turner Home Entertainment’s “The Bible Collection” (which includes “Abraham”, “Joseph”, “Jacob”, “Moses” and “Samson and Delilah”, Hallmark’s “Noah’s Ark” starring John Voight, and others.) The kind of agreements that were penned in order to receive permission to use these productions just astounds me. Clearly, God is at work!

“The Hope” is a chronological approach to the gospel, starting with Creation and ending with today’s Church. Other similar titles exist that may be very useful: “God’s Story: From Creation to Eternity” (video), Stranger on the Road to Emmaus, and New Tribe’s Firm Foundations. Not only are missionaries seeing the impact a chronological approach can have, Christians in the West are seeing its effectiveness as well as much of our society is now post-Christian. Simply talking about a piece of the puzzle is not as good as explaining how the whole puzzle fits together. (For more information, see “How to teach the Bible chronologically,” available from our Effective Evangelism section of our Web site).

Without question, “The Hope” is the most powerful presentation of the gospel on video that we have ever seen. Where the “Jesus” film has introduced millions worldwide to the life and message of Jesus, “The Hope” is set to supplement that by giving an overall view of the timeline of history on Earth. It will be available in video, DVD, VCD, as well as online for viewing. There is a “zero embarrassment” factor on this one, so feel free to share a copy with friends, family, your local library, or international video rental store. Now the question is—what part will you and “The Hope” play together in reaching the nations with the Good News of the Kingdom?