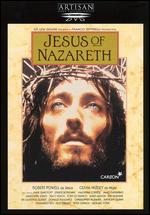 Trinity—How can one God be three persons? Answer

Has science disproved the miracles associated with Jesus Christ? Answer

Could Christ have sinned? Answer

“The Jesus Seminar”—Are their criticisms of the gospels valid? Answer

“The Jesus Seminar”—Who do they really speak for? Answer

This epic television miniseries first aired on NBC in 1977 and is arguably the best filmed dramatization of the life of Christ ever made. It manages to avoid the excesses of some of the lesser Biblical epics of the 1950s by trying to achieve a more rugged, realistic look as opposed to the opulent spectacle one associates with movies like “The Ten Commandments” or “Ben Hur.” It also boasts a better script than the two previous major dramatizations of Christ’s life, “King Of Kings” (1961) and “The Greatest Story Ever Told” by finding the perfect blend between the humanity and divinity of Christ. Robert Powell, as Jesus, does an outstanding job in this difficult role, showing gentleness, compassion and also fiery anger when denouncing the Pharisees. No one has ever matched his performance in terms of intensity, credibility and sincerity in bringing the most difficult part to life on screen.

Director Franco Zeffirelli casts a large number of familiar faces in small roles, but because of the more simplistic, rugged look of the film this doesn’t weigh the movie down like George Stevens’s similar approach did in “Greatest Story”. Also, Christians can really find nothing to object to in the way the story of Christ is told, with the only fictionalizing coming in the form of a Sanhedrin member (Ian Holm) who basically tricks Judas into betraying Jesus. Apart from that, the accounts of the NT are presented faithfully. Best of all is the beautiful simplicity of the ending where Christ returns after His resurrection and closes by looking into the camera and repeating “I am with you always even till the end of time.” Never before has the power of Christ’s love been so effectively communicated on film.

This is, by far, the best movie ever made. It is the story of our Lord and our Savior Jesus Christ. I’ve been a Christian since the age of 5. This movie had a very big impact on my life at that young age. It was a tradition in our family to watch this film every year when it came on tv. Now that I’m grown and married, I’ve had the privilege to buy a copy for myself and my husband to watch whenever we want. The music in this movie is magnificent! The crucifixion portrayal will bring you to tears!

I love the scene when Jesus raises Lazarus from the dead. I love it when He told the soldier, “Go home, your son is well.” I love the scene when Jesus was at the pool and healed the blind man with clay. I thought Mary Magdallen brought this film to life as she washed Jesus’ feet with her hair. The fish and loaves scene. The last supper. I can’t say enough about how moving these parts are. You just have to see it for yourself! I challenge you to sit through it. It doesn’t seem like almost 7 hours and it holds your attention well. You won’t be sorry you did! Any person who would watch this film, if not a Christian, could very well be a believer by the end!
My Ratings: [Excellent! / 5]

Amy S., age 30
I have seen many movies with Jesus as the subject in my 53 years. I saw “Jesus of Nazareth” many years ago before I became a Christian. I thought it an excellent movie then, but now since I recently became a Xian it has become my favorite of any movie on the life of Christ. I often rent it, and have it out from my video store now, to view for the umpteenth time. One of the most important criteria in any Jesus film, that either makes or breaks the film for me, is the portrayal of Jesus.

Robert Powell, although a blue eyed britisher, comes close to what I feel Jesus would have been like. Not so much in looks, as Jesus was Jewish, but just in his expressions and his character. Portraying a divine being, but also fully a man as well. One of my favorite scenes which I feel was done very effectively was when we first see Jesus. You don’t see him until an hour into the film, so it is really a climactic moment. Then you see him winding his way through the crowd to be baptized by John. He looks so divine, that you feel you are looking at God in human form, for real! Another favorite is when he casts out a demon from a possessed man.

He steps toward the man, and says in a loud, strong commanding tone, “LEAVE HIM!” It sent chills down my spine. The rest of the film was excellent with every big name actor putting in a fabulous performance. James Farentino does an excellent job in his portrayal of Simon Peter. In addition this movie tells you more about the life of Mary, Joseph and Jesus than any other movie. It is intelligent, in depth, beautifully done with adherence to scripture a plus. I have been waiting for Christian Spotlight to review this movie. I am so happy they finally did.
My Ratings: [Excellent! / 5]

Gale T., age 53
…a beautiful retelling of the life of Jesus Christ that has no profanity whatsoever, no sex, or anything else that may either disturb and/or go against God’s Law. There is some violence (like when babies are being ripped from the arms of their mothers and being brtually slaughtered), but it’s nothing that may upset anyone. Released back in 1977, Jesus of Nazareth is perhaps the most detailed depiction of the life of our Lord and Savior Jesus Christ that has ever been filmed.

The running time of the film can back me up on this (a whopping 6 hours and half!). I had seen this film many times before I even got saved. The life of Christ has always interested me, even before my salvation. This film was one of the first I’ve seen and is very realisticly done. Jesus of Nazareth starts out long before Christ’s birth. We see Mary and Joseph become engaged through a traditional Jewish ceremony.

The story goes on further to Mary’s meeting with Gabriel and the actual wedding. As a matter of fact, Jesus isn’t even born until approximately an hour after the film starts! The film shows many of Christ’s miracles, but some of the more known events and miracles (temptation in the desert, water into wine) have been omitted. Jesus is presented here as VERY Divine, we hardly ever see His human side. At times, though, Jesus seems to have a glazed look about His face and it’s hard to identify with Him as a Man with a mission. But Robert Powell still did a superb job as our Lord.

A Jewish pharisee by the name of Zerah sort of represents the pharisees in general, but it’s very interesting and well played out by Ian Holm in one of his best roles. I highly reccomend this film to anyone who wishes to see a beautiful and respectful dramatization of the life of Christ. Only, I wouldn’t exactly recommend this to unsaved people unless you’ll explain to them certain scenes.

One example is the annunciation. The annunciation just shows Mary staring at a window with light streaming through it, and occasionally Mary would say her lines. I can see the director was trying to show that only Mary could see and hear the angel and that no one else, not even the audience, could see it. The Resurrection is also a little hard for unbelievers to follow, too. But all in all, I highly recommend this film and it’s a wonderful preaching tool as long as you explain certain scenes to the unsaved.
My Ratings: [Excellent! / 5]