Have the burial sites of any people in the Bible been found?

Throughout Bible lands there are numerous “traditional” tombs of various Biblical personages, sometimes several for one individual! In many cases, there is no historical or archaeological evidence to back up the identification. There are various instances where there is strong, if not certain, evidence for locating the burial site of a person, or persons, named in the Bible.

Ossuary of Caiaphas the High Priest

Caiaphas was high priest for 18 years, A.D. 18-36. He most likely gained the position by marrying the daughter of Annas, head of a powerful high-priestly clan (John 18:13). Caiaphas is infamous as the leader of the conspiracy to crucify Jesus.

At a meeting of the religious leaders, Caiaphas said, “It is better for you that one man die for the people than the whole nation perish” (John 11:50). He was referring to the possible intervention of the Roman authorities, if Jesus' teaching should cause unrest. His words were prophetic in that Jesus did die for the people, all the people of the Earth, as a sacrifice for sin. 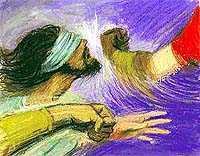 Read the story of Christ's death

After He was arrested, Jesus was taken to Caiaphas' house and detained overnight. The guards mocked and beat Him (Luke 22:63-65). In the morning He was interrogated and further beaten. Caiaphas asked Him, “Are you the Christ (Messiah), the Son of the Blessed One?” “I am,” Jesus replied (Mark 14:61-62). Caiaphas then handed Jesus over to Pilate to be tried.

Following Jesus’ crucifixion, Caiaphas continued to persecute the early church. He brought the apostles before the religious leaders and said to them, “We gave you strict orders not to teach in this Name. Yet you have filled Jerusalem with your teaching and are determined to make us guilty of this man's (Jesus') blood.” Peter and the other apostles replied, “We must obey God rather then men” (Acts 5:28-29).

The Caiaphas family tomb was accidentally discovered by workers constructing a road in a park just south of the Old City of Jerusalem. Archaeologists were hastily called to the scene. When they examined the tomb they found 12 ossuaries (limestone bone boxes) containing the remains of 63 individuals. The most beautifully decorated of the ossuaries was inscribed with the name “Joseph son of (or, of the family of) Caiaphas.” That was the full name of the high priest who arrested Jesus, as documented by Josephus (Antiquities 18: 2, 2; 4, 3). Inside were the remains of a 60-year-old male, almost certainly those of the Caiaphas of the New Testament. This remarkable discovery has, for the first time, provided us with the physical remains of an individual named in the Bible. 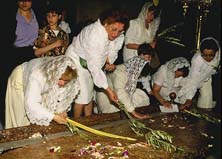 A long tradition going back to the first century, however, maintains that Jesus' tomb is at the Church of the Holy Sepulchre in the Old City of Jerusalem. In the 4th century, Constantine supposedly located the tomb site beneath a second century Roman temple. He constructed a church over it.

This church has been restored and maintained over the centuries ever since. It is today shared by six faiths: Latin Catholics, Greek Orthodox, Armenians, Syrian, Copts and Ethiopians.

A great politician and administrator, Augustus ruled the Roman empire from 27 B.C.-A.D. 14. It was Augustus who issued the census decree that brought Mary and Joseph to Bethlehem, where Jesus was born (Luke 2:1-7). Augustus erected for himself a grand mausoleum in Rome, on the east bank of the Tiber River, one quarter mile northwest of the Roman Forum. The remains exist today in the middle of the Piazza Augusto Imperatore.

It was 285 feet in diameter and 143 feet high, surmounted by a statue of the emperor. His ashes were placed in an urn in the center, while those of other members of the dynasty were place in urns in a corridor around a central cylinder. Although some of the urns were found in place by excavators, the ashes had long since disappeared.

[More about Ceasar Augustus / Read the story of Christ's birth ]

Tomb of the Patriarchs

Tomb of the Patriarchs

The Bible says that Sarah, Abraham, Isaac, Rebekah, Leah and Jacob were buried in Hebron, in a cave called the Cave of Machpelah, purchased by Abraham (Gen. 23).

Traditionally, this cave has been located below the Haram el-Khalil (“sacred precinct of the friend of the merciful One, God”) in Hebron, today a Muslim mosque. References as early as the Hellenistic period (2nd century B.C.) testify that this is the authentic location of the burial place of the Patriarchs. The cave was explored by the Augustine Canons in 1119, at which time they claim to have found the bones of the Patriarchs.

Tombs of David and Solomon

Throughout the kingdom period, the kings of Judah were buried within the city of David. At the southern end of the City of David, south of the Old City of Jerusalem, there are two monumental tunnel tombs which many scholars believe are the tombs of David and Solomon. Unfortunately, they were damaged by later quarrying, so no identifying inscriptions have survived. In the same area are many Iron Age tombs, possibly those of other kings of Judah.

One exception to the normal custom was the burial of Uzziah. Since he was a leper, he was not buried with the other kings, but “near them in a field for burial that belonged to the kings, for people said, 'he had leprosy'” (2 Chr 26:23).

Interestingly, an inscription was found on the Mount of Olives in 1931 dating to the first century A.D. which reads, “Here were brought the bones of Uzziah, King of Judah—do not open.” Evidently, because of his leprosy, Uzziah's bones were removed from the field belonging to the kings and transferred to yet a more remote location.

Cyrus ruled the Persian empire from 559-530 B.C. He is best known for his capture of Babylon in 539 B.C. Already in the 8th century B.C. Isaiah predicted this defeat (Isaiah 45:1-3), and went on to say that Cyrus would “set my exiles free” (Isaiah 45:13). That Cyrus released the Jewish exiles from Babylon is not only documented in the Bible (2 Chronicles 36:22-23; Ezra 1:2-4), but also implied in the contemporary Cyrus Cylinder. This ancient record states, “I (Cyrus) gathered all their former inhabitants and returned to them their habitations.”

Cyrus was buried in a simple gabled stone tomb outside his capital of Pasargadae in modern Iran. According to the historian Strabo, this inscription once graced the structure, “Oh man, I am Cyrus, the son of Cambyses, who founded the empire of Persia, and was king of Asia. Grudge me not therefore this monument” (Geography xv.3.7).

Darius I was king of the Persian empire from 522-486 B.C. He gave permission to renew the rebuilding of the Temple (Ezra 6:1-12), which had been discontinued for some 10 years.

His is the first of three monumental tombs cut into a cliff near the Persian capital of Persepolis, Iran. The inscription on his tomb reads,

King Darius states: King, whoever you are, who may arise after me, protect yourself well from lies. Do not trust the man who lies. … Believe what I did and tell the truth to the people. Do not conceal (it). If you do not conceal these matters, but you do tell the people, may Ahura Mayda protect you. …

There are three other tombs at the site, thought to be those of the Persian kings Xerxes (485-465 B.C.), Artaxerxes I (465-424 B.C.), and Darius II (423-405 B.C.). There are no accompanying inscriptions, however, to be certain of these identifications. Xerxes is the Ahasuerus of the book of Esther, the king whom Esther married. Ezra was a scribe (Ezra 7:6) and Nehemiah a cupbearer (Nehemiah 2:1) under Artaxerxes I. He authorized both Ezra and Nehemiah to return to Jerusalem, Ezra to carry out religious and judicial duties (Ezra 7:12-26), and Nehemiah to rebuild the city walls (Nehemiah 2:1-9). Darius II may be the Darius mentioned in Nehemiah 12:22, but this is not certain.

Copyright © 1998, 2002, Films for Christ, All Rights Reserved—except as noted on attached “Usage and Copyright” page that grants ChristianAnswers.Net users generous rights for putting this page to work in their homes, personal witnessing, churches and schools.