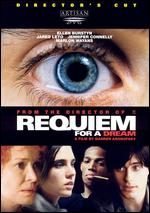 In the last couple years, there has not been a film like “Requiem for a Dream.” In its short 102 minute screen time, it tenderly destroys every character it focuses on. It is a film so powerful I don’t want to break it apart and look at each piece but instead step back and look at the whole.

The first scene shows a mother who has hand-cuffed her television to the radiator in order to keep her son from selling it in order to get drugs. In the end, he prevails, but that first scene establishes the theme of the film: ADDICTION.

As it is propelled along, we are introduced to a core group of 4 characters: Harry Goldfarb (Jared Leto), the television thief and son of Sara Goldfarb (Ellen Burstyn), who is addicted to television. Joining us later are Harry’s girlfriend, Marion (Jennifer Connelly) and Harry’s best friend Tyrone (Marlon Wayans).

The beginning of the film stresses the dreams of these characters and the experiences and feelings that their respective drugs bring to them. What is fascinating about the drug scenes is the mode of delivery to the audience. They come in vivid, sharp, quickly edited scenes that stress the jarring nature of the drug and are then often followed by unconventional time-bending scenes that show both the glee of the drug and how quickly the bliss fades.

The film follows each character as they fall deeper and deeper into the addictions they face. Because of the reality of the characters, the destructive power of these drugs is portrayed more vividly than I have ever seen. In particular, Ellen Burstyn’s performance stands out as overflowing with emotion and sad tenderness as she falls into a pitiable insanity. Also very strong is Marlon Wayans’ performance as a grown up inner city kid who just wanted to be good at something in his life. The cast is stellar, the direction is great, and the writing is powerful.

Along with that power, however, comes a great deal of vivid and disturbing imagery. Although the edited version tones down the violent sexual ending, it still contains quite a bit of language and some difficult sexual scenes.

Addiction plagues our society and the common response is to ignore it or pretend it does not affect us. “Requiem” reminds us that it affects us all.

Note: “Requiem” gained a great deal of notoriety because of its initial NC-17 rating. Rather than accept that commercial mark of death, Artisan released it unrated and asked theatres to participate in excluding the younger audience. When it became available on video and DVD, it garnered more press because of Blockbuster’s justified refusal to house the unedited version. Instead, an R-rated edited version with a few shots removed was accepted on their shelves—removing 2 seconds of sickening imagery.

Positive—The primary review points out that viewers who support Blockbuster Video or other stores that stock the R-rated version of the film instead of the unrated theatrical version will miss nothing by viewing the R-rated version. This is incorrect, as you are missing the director’s original intent of the film. I agree that the portion of the film that was removed was offensive, however it illustrates how far the character will go to serve their addiction. All controversy aside, “Requiem For A Dream” is nonetheless a powerful, moving film.
My Ratings: [Extremely Offensive / 5]

Christopher McShane, age 27
Comments from young people
Positive—Without a doubt, “Requiem” is one of the most powerful films ever made. It is offensive, it is shocking, and it is extremely disturbing… as it should be. Drugs are a nightmare. This film brings this truth to life in a way that no film in history ever has.

As far as technical aspects, this film is first rate! The acting is Oscar-worthy, the editing is phenomenal, the makeup mesmerizing. You’ll be hard pressed to find a movie that surpasses the technical superiority of this film. “Requiem” is a tough movie to sit through, but it is a movie that must be seen.

Anyone can become a “junkie” and addiction to anything can ruin your life. These are strong messages that the films graphically emphasizes. If only I had seen this movie before I got involved in drugs… This is by far the most realistic cinematic portrayal of how drugs can ruin your life. Drugs pull you in, trap you, and torture you… just like the poor characters in the movie. Watch this movie… it could change your life… or save it.
My Ratings: [Very Offensive / 5]

Tim Lyne, age 20
Positive—I rented this movie yesterday and was shocked by what I saw. On one side, I agree that drugs bring nothing good, and addiction is so powerful, that only the power of Jesus Christ is strong enough to help men and women break through. On the other hand, this “edited version” does portray strong, hardcore sex scenes that were very difficult to watch, but show the crude reality of a girl who says “I’m not an addict” but is in desperate need of her drug.

Overall, I give a cautious positive review, but would like to warn parents out there: If you want to show your sons what drugs can do for you, this may be it, but you’ll be shocked. I’d recommend you watch it on your own and consider a prayerful decision as to show this to your sons and daughters, along with a thorough explanation of the consequences of sin, and that only the power of Christ is strong enough to stand against sin and temptation.
My Ratings: [Extremely Offensive / 4½]

Anonymous, age 20
Positive—This film is a little more than somewhat offensive, but not quite very offensive. I feel that this is a positive must see film for those who are mature enough to handle some sexual scenes. It takes a look at not only the problems created by illegal drugs, but also legal drugs.

This film also shows us that addiction can happen at any age. I haven’t seen the unedited version, but the edited version was strong enough to prove its point. I recommend this film to adults and those who are mature enough to take it for what it is.
My Ratings: