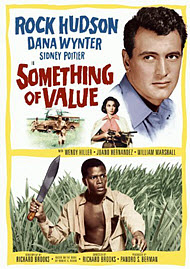 This is one of the most disturbing films of the 1950s. It avoids violating the MPAA production codes in effect at the time because its overall subject—the 1952 Mau Mau uprising in Kenya—is authentic, and the killings aren’t based on vengeance (something very close to vengeance, but no more so than killings in war). However, some cities in the southern U.S. chose not to screen it. Even now, it’s painful to watch, but I recommend it.

After an introduction in which Winston Churchill states that he already foresaw trouble in East Africa at the turn of the century, the story opens in the late 1940s. Peter Mackenzie (Rock Hudson) and Kimani (Sidney Poitier) have grown up in Kenya as friends; but as adults, they must now take on the roles of master and servant. Neither one is comfortable with this fact of life; both are portrayed as truth-seekers, more thoughtful than average. Despite suffering indignities, Kimani doesn’t hate whites as some of his people do; but after Kimani’s father is imprisoned for following Kikuyu tribal custom and ordering a breech-born baby to be killed, Kimani is enticed into a resistance movement that eventually becomes part of the Mau Maus. When the resistance kills unarmed blacks in order to steal guns from whites, Kimani has pangs of conscience; but he’s in too deep to back out now.

An “outside agitator”—an educated, Westernized black, dressed in a business suit—speaks to the resistance leaders and tells them the time for words has passed, and the only thing the Europeans will understand is force. He says that the Kikuyus’ land was wrongly taken by the whites (even though it was purchased) because it’s forbidden to sell it to anyone outside the tribe; therefore they’re justified in killing all whites until those that remain have fled the country.

After some soul-searching, Kimani agrees. Kimani has misgivings again at the Mau Mau blood oath, and yet again when he’s ordered to lead an attack on the Mackenzie farm to “prove his loyalty.” The killing of children—a rare subject in films—is implied, but not shown onscreen.

In suppressing the uprising, the white leaders are just as ruthless as their Mau Mau counterparts, using lies, torture, murder and psychological manipulation—whatever gets the job done. Peter is disturbed by this conflict that’s turned the men on both sides into animals, but he has no solution. He, too, is trapped in his role.

Portions of the Mau Mau initiation are shown; it’s unnerving to hear men vow to “never be a Christian” and to “kill or drive out all Europeans.” Some elements of the ceremony—such as all initiates having the same girl after she’s been prepped with the organs of a goat—are of course omitted, and are only referred to in generalities.

Why vow not to be a Christian? This isn’t dealt with at any length in the film, but it was widely believed that Christian missionaries there and elsewhere served—wittingly or unwittingly—as an arm of the colonialists by teaching submissiveness and by taking away the native peoples’ customs and way of life.

This was partly true. Sometimes missionaries enforced European cultural practices as though they were mandated by the Bible, when, in fact, they were not. Other times, it was a simple misunderstanding. For example: the Kikuyu practice of Female Genital Mutilation was suppressed by the colonialists and missionaries, and the Kikuyu protested that the New Testament (1 Cor. 7:19; Gal. 5:6; 6:15; Col. 3:9-11 etc.) says it doesn’t matter whether you’re circumcised or not (the problem was that the Kikuyu word for FGM is the same as the word for male circumcision).

Back to the film. There’s no way the ending can be “happy,” but it’s constructed to be as “hopeful” as possible.

The Mau Maus didn’t achieve immediate independence for Kenya. Inflamed by bloodlust and insufficiently armed to attack the Europeans effectively, they killed 100 times as many blacks as whites; and the movement was eventually put down. But that uprising, and the fear of similar actions throughout Africa, transformed that continent’s political map as the Europeans pulled out and many colonies became independent nations in the late ’50s and early ’60s. The reputed former Mau Mau, Jomo Kenyatta, eventually became the President of Kenya.