for thematic elements and some mild language

Reviewed by: C. I. Bishop
CONTRIBUTOR 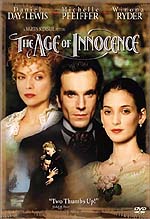 Newland Archer (Daniel Day-Lewis) isn’t quite assured of his arranged marriage to young and spirited May Welland (Winona Ryder); and when her breathtakingly beautiful and passionate cousin, the Countess Ellen Olenska (Michelle Pfeiffer), pays them a visit mid-season he is immediately swept off his feet. Ellen, a woman separated from her adulterous husband, is the talk of London society and scandal and possesses the bewitching quality of boldness that Newland longs for in his own restrained life.

Determined to make his young bride happy as well as protect Ellen from the rumors flying madly through the town, he convinces May to announce their engagement early. It does interrupt the rumors and give the gossips something more to talk about but only prompts Ellen into seeking his counsel. Desiring a divorce from her wayward husband, she asks for his legal aid. Unfortunately, she’s muddied the separation with a few scandalous lovers of her own and Newland is convinced that her husband would use these as black marks against her and forever ruin her in the social eye.

As their wedding draws near, May goes about her brightly-painted life without a hint of suspicion as Newland grows more and more fond of Ellen. Their marriage may be overshadowed with his love for another woman, but how far will Newland go before he feels the restraining pull of honor? The film, from the pen of one of the nineteenth century’s most controversial authors, questions and mocks the tightness of Victorian society, from the rumors that could leave a man or woman in ruin to the grandeur and ruffled lace of an upper crust London that is brightly painted but sadly empty of emotions.

The players are portrayed well, from the young and often cow-eyed Ryder to the striking older beauty of her elegant “cousin” Pfeiffer. The film is a work of art, a feast for the eyes awash in spectacular craftsmanship, from the delicate tones of the parlor to the intricate watered silks and bold, vibrant colors of the gowns. Incidentally, the costume designer won an Oscar for her creations and to say that they’re worth anything less would be idiotic. I lost interest in the story halfway through and immersed myself in the fabrics and gowns.

However, from a Christian perspective (and good conscience) I cannot recommend it other than for older viewers who would like to feel the burn of an adulterous relationship that leaves wrecked lives in its wake. While the young lovers never progress between a few passionate kisses, the audience is painfully aware that in both cases they are married. Adultery is never glorified but is present in every fiber of the film and the ending leaves the viewer strangely discontent and as unhappy as the players. A few profanities are uttered and several paintings show upper female nudity. Also, Christians should be disappointed that Newland and Ellen’s choice not to pursue the relationship comes more from their fear of the tabloids than a respect for Biblical principles.

Like the twisted imagery of Wuthering Heights, The Age of Innocence proves once again that the Victorian era wasn’t so innocent after all.