The Lost Book of Abraham 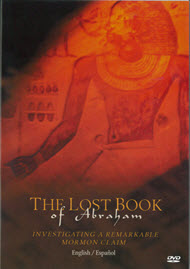 Abraham in the Bible

Egypt in the Bible

Is there any archaeological evidence for the claims made in The Book of Mormon regarding Jesus’ visit to the Americas? Answer

What are the differences between Mormonism and Christianity? Answer
The Church of Jesus Christ of Latter-day Saints—is it simply another Christian denomination? Are there important differences?

Should a follower of Jesus Christ pray about The Book of Mormon to see if it is true? Answer
Mormons have often asked Christians to read the Book of Mormon and then praying to see whether it is true or not. Is prayer a proper test for truth?

A very helpful documentary on a subject unique to the Mormon religion. A must see for anyone involved in the Mormon church or anyone interested in learning the facts behind this intriguing book within LDS scripture.

The Video “The Lost Book of Abraham” is a documentary by the Institute for Religious Research on a piece of LDS scripture found within the Pearl of Great Price known as “The Book of Abraham.” This book alleges to be a translation by Joseph Smith of some ancient Egyptian writings of Abraham, the Biblical Patriarch, allegedly written “by his own hand upon Papyrus,” that were sold to Joseph Smith in 1835 by a traveling artifacts dealer named Michael Chandler.

The video “Abraham” sheds light on why this issue is so important to anyone who is contemplating the claims of Joseph Smith. “The Book of Abraham” consists of many essential doctrines unique to the Mormon Church, such as the existence of numerous gods involved in the creation of the world and its inhabitants. It teaches the pre-existence of human spirits in the heavenly realms awaiting their bodies for use on the Earth, and alleges that the Melchizedek Priesthood is held by people other than Jesus Christ, and, of course, teaches about the life of Abraham.

Several leading Egyptologist including Dr. Robert Ritner of the University of Chicago, take head-on the Mormon claim that the “Book of Abraham” is an accurate translation of the manuscripts received by Joseph Smith in 1835. In 1844 after Joseph Smith was killed, the manuscripts were passed on to his widow who eventually sold them and lost track of their location. For well over 100 years it was assumed that these manuscripts were forever lost or destroyed, then in 1966 these very manuscripts once belonging to Joseph Smith, turned up in the New York Metropolitan Museum of Art. They were officially presented to the Mormon Church in 1967 and since then, many prominent Egyptologists schooled in the ancient Egyptian hyroglyphic and hieretic language have examined these manuscripts, translating what they say and determining whether they coincide with Joseph Smith’s “translation” found within the “Book of Abraham.”

As the video points out, in Joseph Smith’s day, Egyptology did not exist as a science, and no one knew how to read Egyptian writing to test the accuracy of Joseph Smith’s “translation”. Today, however, Egyptology is a developed science, and such manuscripts can be translated and understood in their original contexts. Upon examination, Dr. Ritner discovers that these manuscripts are none other than the common Egyptian “Book of Breathings” funeral Papyri. Dating to the 1st Century B.C. (not the 20th century B.C. when Abraham lived, as Smith claimed) this Book of Breathings Papyri consists of a pagan spell cast over Hor, a deceased Priest of the Egyptian god Amon. It was common practice among Egyptians of that day to include a copy of this manuscript within the tomb of a deceased person to help them in their trek to the afterlife. This common burial practice explains why so many of these same manuscripts have been found and can be seen today within museums all around the world.

“Abraham” is quick to point out that while this offers a clever spin on the disparity that exists, such an explanation ignores the claims made by Joseph Smith himself regarding his translation of the figures and facsimiles on the manuscript. Within his personal diary, and through the testimony of associates, Smith claimed repeatedly that he was “translating” the figures and facsimiles. In addition, Joseph Smith provided a supplement to his translation called the “Egyptian Alphabet and Grammar.” This work was an educational tool intended to inform the public regarding the alphabet, numbering system, and grammar used by the ancient Egyptians. Since there was no knowledge of this language at that time, many accepted his “educational tool” as just another demonstration of Joseph Smith’s divine ability to unlock the mysteries of the ancient Egyptian language.

Modern Egyptologists who have examined Smith’s Egyptian Alphabet and Grammar have reached the same conclusion as with his Book of Breathings translation. The alphabet, grammar, and numbers presented by Smith bare zero resemblance to any ancient Egyptian language or numbering construct, and clearly had relevance only within Joseph Smith’s fertile imagination.

“Abraham” concludes that the implications this has on Joseph Smith’s other claims are devastating. If he is shown to be shamelessly fraudulent with one text, why should we trust him with another, like the Book of Mormon. Especially when no ancient Book of Mormon manuscripts have ever been found that can be examined to vindicate his claim as being a divinely gifted prophet and seer.

Overall, I give this video very high marks, and would recommend it to anyone contemplating the claims of Joseph Smith! The only negative mark I would give is that it spends precious minutes taking the viewer through a relatively detailed account of Michael Chandler’s credentials as a business man and traveling artifacts dealer. Aside from his encounter with Joseph Smith, I did not feel this information added anything relevant to the subject of the video. Time could have been better spent illustrating how many Book of Breathings manuscripts have been found to date, where they were found, when they were written, and where they are located today. This information would have bolstered the credibility of the Egyptologists who provided their conclusions in the video.

In spite of this one negative mark, “The Lost Book of Abraham” is a powerful project that should have been completed a long time ago. The facts it presents are accurate, organized, educational, and highly intriguing.

Experts interviewed in “The Lost Book of Abraham”

Positive
Positive—…a very compeling film that all who are even slightly concerned for the millions of “Precious” Mormons; that Joseph Smith and his over active lust for “Fame” “Power” “Money” and other men’s wives, is revealed in part in this excellent film.

It is very hard to even discuss any of these issues with most, but not all Mormons. Once I started looking into their Doctrine; simply because a very dear and precious Mormon family moved in next door; I was really very shocked at all of the deceit that has taken place in their Church; {Lucifer and Jesus} they say are “Brothers”!!! Mary was not found to be with a child by the “Holy Ghost;” but by Adam who is God the father. In some of Joseph Smith’s writings, it is almost word for word what Satan said in the Garden. Keep up the good work. With Love in Jesus.
My Ratings: Good / 4½

Jerry Keene, age 72
…“The Lost book of Abraham” documentary not only gets the facts right with regard to this story, but tells this fascinating tale in an utterly captivating and professional way. The producers also obviously took tremendous care in writing the script so as not to unduly offend the LDS people. I just cannot recommend this documentary more highly. …
Craig J. Hazen, Ph.D., Biola University