for a scene of drug use and some sexual references
Moral Rating:
not reviewed
Moviemaking Quality:
Primary Audience:
Adults
Genre:
Comedy and Romance
Length:
1 hr. 48 min.
Year of Release:
2003 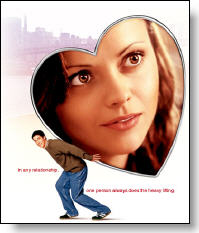 Here’s what the distributor says about their film: Jason Biggs (“American Pie,” “American Wedding”) and Christina Ricci (“The Opposite of Sex,” “Sleepy Hollow”) pair up in the romantic comedy “Anything Else.”

Jason Biggs stars as Jerry Falk, an aspiring writer in New York, who falls in love at first sight with a free-spirited young woman named Amanda (Christina Ricci). Jerry has heard the phrase that life is like “anything else,” but he soon finds that life with the unpredictable Amanda isn’t like anything else at all.

“Anything Else” is written and directed by Woody Allen and produced by Letty Aronson, with Helen Robin serving as co-producer. Stephen Tenenbaum is the executive producer, and Jack Rollins and Charles H. Joffe are the co-executive producers.

Negative—Movie about a young nihilistic writer (Biggs), and his atheist life coach (Woody Allen), and a girlfriend, for whom he leave another girl for, which can have sexual intercourse with anyone except him. Vengeance is glorified as courage with positive remarks from the young about, after Dobel broke all glasses of a car in a rage, because two guys stole his parking. Also, isn’t it strange that a movie with an atheist worldview uses the word “God” eleven times, “Jesus” four times, “Christ” two times and that a character shouts “Jesus-Christ” once? We see the true atheist nature of Woody Allen in this movie. Very offensive!
My Ratings: [Very Offensive/2]

Eric, age 24
Movie Critics
…a test of patience …It’s asking a lot of audiences to spend nearly two hours with characters as screen-unfriendly as the ones played by Biggs and Ricci, …Their misery, however, isn’t tempered by laughs…

Mike Clark, USA Today
…It boasts some of the meanest, most elegant sexual humor and cruelest, funniest topical gags since Billy Wilder’s heyday… It’s an uncomfortable movie to watch

Michael Wilmington, Chicago Tribune
…there is nothing to set this work apart from any number of mediocre Allen films. …With few positive personality attributes to counter all the negative ones, it has become increasingly difficult to muster much sympathy or even interest in any of his characters…