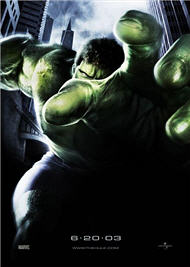 The Hulk on the streets of San Francisco

Sequel to this film: The Incredible Hulk (2008)

The first thing many adults will want to know about director Ang Lee’s new film, The Hulk, is, “Will it be like the television show of the ’70s, starring Lou Ferrigno? Yes, Lou Ferrigno is in the film—for roughly 10 seconds, playing a security guard. No, he does not play the hulk. And this blockbuster is definitely based on a comic book, not a TV series, as evidenced by the creative wipe effects and split screens—familiar to comic readers and rarely ever used in films of the last 2-3 decades.

For those unfamiliar with The Hulk’s premise, this is a Dr. Jeckyl and Mr. Hyde story re-told in the vernacular of modern science. Scientist Bruce Banner (newcomer Eric Bana) gets in the way of a lab accident involving deadly gamma rays, which would have killed him, except… you have to see the movie to find out the rest of that puzzle.

As in typical comic book style, such as the recent SPIDERMAN (also created by artist Stan Lee), hero Bruce is a science whiz who can’t have the girl he wants until he undergoes a transformation that occurs in spite of himself. After receiving his new powers, he does his utmost to save his girl, Betty (Oscar winner Jennifer Connelly) from peril while father figures struggle to control him and keep young Bruce (aka The Hulk) away from her.

Bruce Banner’s periodic transformations into a 12-foot-tall, seemingly indestructible green monster may be seen as a metaphor of frustrated masculine anger given complete vent. Set loose “from the boundaries God has set up” through science, Bruce now has the freedom to wreak uncontrollable havoc, expressing his rage through extreme physical violence. But the hero’s power also enslaves him, frightens Betty, and makes him a target for evil men seeking to take advantage of his strength.

Even more interesting, it is revealed through flashbacks that Bruce was born with this monster inside him, ready to explode given the opportunity. This raises questions in one’s own mind—is there something dark and evil inside of me that would cause an awakening of rage, given the right circumstance? Can a human being—even a small baby crying for its stolen pacifier—be capable of unyielding ferocity? This movie suggests this same premise and carries the metaphor to thought-provoking lengths.

For mindless entertainment this summer, look elsewhere. The Hulk is a frightening, relevant reflection of a society willing to defy God in pursuit of more power, of fathers deserting and destroying their own offspring, and of children seeking ways to move beyond their parents’ self-serving power struggles in order to find real life and hope. For more on hope, see: THE HOPE.

Don’t believe The Hulk is demonic, despite his green, frightening appearance. He’s the true nature of all human flesh made manifest—self-serving, cunning, and evil. This is one film where Hollywood gets sin right. There is no “power within” Bruce Banner to help him conquer the monster who keeps rearing its ugly head each time he gets angry. Only love seems to appease him.

Ang Lee’s new epic, “The Hulk,” is a fascinating morally-grounded story that will thrill action-adventure and comic book fans. The objectionable content includes the use of God’s name in vain a few uses, plus a long shot of Bruce’s bare posterior. The violence is primarily directed toward objects, machines, and some large, vicious dogs.

Editor’s Note: Should you let your children see The Hulk? First, see the film yourself, then decide. Images of a wild-eyed father attempting to kill his own son is enough to recommend that theaters actually enforce the PG-13 rating.

Positive
Positive—I found the Hulk movie very enjoyable for two reasons. First it had a good story, and second it was well acted. It had some intense Hulk comic book style fighting, especially with the Hulk dogs. If you are thinking about bringing your child under the age of 12 to this movie, i would encourage you to see it first to decide if your child can handle those scenes. This movie will appeal to both Adults with the script, and acting, but the kids will love the Hulk smashing things. The only objectional think I find in this film is some language, not a lot, but there is one GD in the film that I wish wasn’t there. I saw it with a group of Christian friends and we all loved it. There is some good things to talk about with your children after the film. Go see it and decide for yourself.
My Ratings: [Average / 4]

Jon McCann, age 24
Positive—First off, this is NOT the Lou Ferrigno Hulk from TV. I repeat, NOT!! I want to also add up front that this movie is WAY too intense for children. Parents, please do NOT take your kids to The Hulk thinking this is remotley like the old TV show.

I loved the movie. To me it took too long to “take off,” but when it did, it rocketed. There was a scene involving the Hulk and some mutated dogs that I could have done without.

Just like this isn’t the TV Hulk, the story also plays a little fast and loose with the comic book version. I wish they had stuck more to the classic storyline of Bruce Banner. The story did touch on the fact that Banner was the product of an abusive home and that did play into things.

I did like they way they tied characters together from the past to the future. “Thunderbolt” Ross and Banners father tangling while thier children were still very young.

While the F/X’s were astounding (the Hulk finally comes to life on screen!!), there was one aspect of the movie I hated. Multi-shots on the screen at the same time. It was almost on the cheesy side to me. I guess I won’t be one getting into the multi-angle thing on DVD’s.

I enjoyed “The Hulk.” I would take my 15 year old nephew to see it, but you couldn’t pay me enough to take my 9 year old niece. It’s way too intense for small children.
My Ratings: [Average / 4]

James, age 39
Positive—A teriffic twist on the plethora of comic-book movies out there. This film is more introspective and character-driven than expected, and director Ang Lee gives us a visual feast that feels like entering into a comic book come to life. Some interesting illustrations of man’s struggle with his own nature, but most of all, a neat summer film.
My Ratings: [Average / 4]

D.J. Williams, age 20
Comments from young people
Neutral—I thought that this movie wasn’t as exciting as I thought it would be and it reminded me a lot of spiderman in a sense even though the Hulk destroyed things. I don’t know if I’d let my eleven year old brother watch it though because there are some frightening moments. I think parents should watch it before there children.
My Ratings: [Better than Average / 3]

Maria, age 17
Positive—I was surprised at how good this film was. I enjoyed the special effects and the storyline. Despite the brief rear nudity and mild language, this is an overall good movie. Great moral values are displayed such as love and friendship between the two main stars. This is one of the rare wholesome movies since Spider-man. My advice, if you enjoy sci-fi action flicks, this is a must-see.
My Ratings: [Average / 4]

Paul Hopkins, age 14
Negative—I really was saddened by the outcome of this movie. If you want to see a good movie, go see “Spider-man” There were a lot of cool action scenes with the hulk destroying lots of property, but when I walked out of the theater, I have over a dozen questions running through my head. They leave you out in the open, I didn’t understand half of the things going on. And the first half hour was really boring, and then the rest was pretty boring except for the fighting scenes. Don’t waste your money on this film.
My Ratings: [Better than Average / 2]

Christina, age 14
Movie Critics
…cutting-edge special effects extravaganza and a throwback to those science fiction classics of the ’50s, where B-movie makers actually had things to say about the human condition. It’s the best of both worlds, filled with visual energy, genuine artistry and compelling human emotions…

Margaret A. McGurk, Cincinnati Enquirer
…A dozen profanities include one s-word, one “g—d--” and two exclamatory uses of Jesus’ name…

Bob Smithouser, Plugged In
…No one gets in bed with anybody… There was not even sexual innuendo. …Just the brief full rear male nudity …is ALL of the sexual content…