for some violence and strong language. 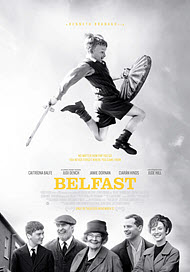 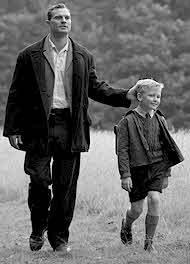 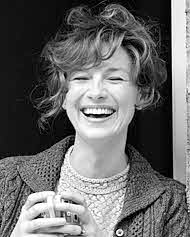 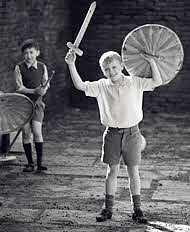 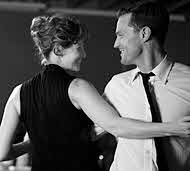 Quotation in the film from 1 Corinthians 13 LSB 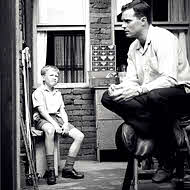 Doing the right thing when others are doing wrong things 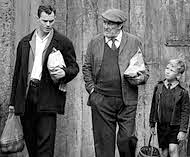 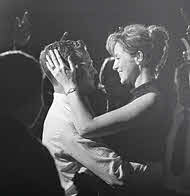 Other films about Ireland and the Irish:

“I would hurry to my place of shelter, far from the tempest and the storm. Lord, confuse the wicked, confound their words, for I see violence and strife in the city. Day and night they prowl about its walls; malice and abuse are within it.” —Psalm 55:8-10 NIV

Kenneth Branagh fictionalizes his early childhood in war-torn Northern Ireland in his latest, and most personal, film, “Belfast.”

Branagh’s mostly black and white elegy is splendidly shot by cinematographer Haris Zambarloukos, who, along with the director, have tamed the florid style of the pair’s most recent efforts (“Artemis Fowl,” “Murder on the Orient Express,” “Cinderella”). By minimizing the shades of their palette, they have added considerable color to their story. The buoyant score, a combination of modern pop and 1970s style rock balladry, is by Belfast native, Van Morrison.

The story, written by Branagh, is told through the eyes of 9-year-old Buddy (Jude Hill) whose gaping, eye-popping bewilderment conveys an unshaped understanding of a misshapen world. The nostalgic childhood moments delight in their familiarity and provide enough humor to distract from the realities of a society so off balance that it risks destroying itself.

Young Buddy gamely defends his turf using a wooden stick as a sword and the top to a garbage can as a shield, unaware of the bigger battle that engulfs his street, his home, and his country. Buddy’s games are reminiscent of those played by the 9-year-old boys in John Boorman’s 1987 film, “Hope and Glory,” who dress in self-made fighting gear and rule atop the rubble razed by German bombs. They complain about how unfair it is that British allies are moving into their neighborhood and how “the Yanks is comin’ over here and stealin’ our women.”

Movies told from a child’s point of view frame an adult milieu with optimism for the future, but also with a sense of fragility for the here and now. Whimsy goes hand in hand with danger. The “Home Alone” movies effectively tapped into that dichotomy. So did the 2016 film, “Lion,” by Garth Davis. Childhood is sweet but it is too often the victim of life’s arbitrariness and cruelty.

We have been reading, if not seeing, accounts of tragedies occurring in strollers or car-seats in the major cities of our own country in our own time every weekend of every week. There had to be nostalgic memories and moments of sunniness in those lives, but it is unlikely that will see a movie, or even a news segment, about what it was like to be one of those children.

My favorite film told from a child’s point of view is Vittorio DeSica’s 1947 film, “Shoeshine.” If ever a work of art reveals how adult corruption can erode youthful innocence it is DeSica’s masterpiece. Set in post-war Italy, it is the story of two boys who strive to buy a horse, a symbol of their idealized vision of adulthood and masculinity, only to have their efforts systematically beaten down by adult forces that prey upon and ultimately destroy those ideals, and their lives. Guilty adults may drown in the depths of the seas, but they hang millstones around innocent necks as well as their own.

Branagh may not be Vittorio DeSica, but with “Belfast,” he proves himself an adept commercial filmmaker who understands that making a work palatable to audiences and to studios requires balancing sunshine with fog. Irish identity, with its political resentments and dark despair, encapsulated in Eugene O’Neill’s words, “there is no present or future; only the past happening over and over again,” needs the bushel lifted off its lamp, and Branagh does so by creating a searing drama that, despite its mayhem and violence, is full of comedy and warmth.

Buddy lives with his family in North Belfast. The time is 1969. That area of the city is mostly Protestant, but it is also home to several Catholics. Buddy’s family is Protestant but has had few problems getting along with neighbors who are not.

Tensions begin when a group of Protestants set fire to Catholic homes and set up a barricade around the ruins in order to protect their newly acquired territory. What begins as a cause based on principle degenerates into mafia-style patronage that survives by racketeering and intimidation, and what starts as societal rage at injustice quickly becomes looting for looting’s sake.

Buddy’s father (Jamie Dornan in a career-resurrecting performance) works as a joiner (a carpenter) in England (everything, especially work, is scant in Northern Ireland), so he spends most of his time away from home.

The task of raising Buddy and his brother, Will (Lewis McAskie) falls to their mother (a luminous Caitriona Balfe).

The grandparents are played by Ciarán Hinds and Judi Dench. Hinds, always a standout, is masterful here. He holds back as much as he gives, muffling his words and letting his jaw slack when quiet and reflection are most needed. He almost whispers his best lines, my favorite being: “too long a sacrifice can make a stone of the heart.”

Hinds’ is the best portrayal of an Irish father since Ray McAnally’s superb turn in “My Left Foot.” Judi Dench, on the other hand, has fallen into the Maggie Smith trap of stealing every scene she’s in, and making every co-star a foil to her wit. Whereas Hinds disappears into his role and becomes Pa, Judy Dench erases Ma and leaves us with an entertaining but somewhat out of place “Judi Dench as Ma.”

Branagh does not give us a fully developed background story, something to be grateful for. Too much exposition can confuse and sink a movie, a fate suffered by Neil Jordan’s Irish history film, “Michael Collins.” Most of us know the story of the Irish Troubles, so an intimate drama unfolding amid several bigger ones is not just more palatable, but more telling.

Branagh presents other broader but more down to earth conflicts as well, notably the ever-present Irish dilemma of whether to stay in one’s homeland or to abandon it for the chance of a better future. One of the characters in the film claims ruefully: “the Irish were born for leaving,” a sentiment that haunts every Irish family living on every Irish street. The 2015 film, “Brooklyn,” sentimentalized that subject, but Branagh handles it better here. That personal struggle, along with others such as tax liens and gambling fixations, are ever present burdens that accrue with time, and eat away at one’s identity and peace.

Branagh adds color to the film when he slips in some clips of movies from the 1960s. It’s a thrill to watch the family watch late 1960s movies such as “Chitty, Chitty, Bang, Bang” and even “One Million Years B.C.” Those films lift the Belfast moviegoers, and us too. Branagh goes too far with the “High Noon” analogy complete with the classic’s theme song by Tex Ritter, but it falls short of a blatant rip off because it emphasizes how courage is an essential aspect of fatherhood and leadership.

Those old movie references, aglow in Technicolor, show us how a film can make us happy at the same time it makes us melancholy. Cinema reminds us that while real life often cheats us, there is something beyond our understanding, if not our faith, that promises us much more. That car going over the cliff in “Chitty, Chitty, Bang, Bang” will only fly on the silver screen, and reminds us that something better beyond this life awaits us, something that does take wing.

“In My Father’s house are many dwelling places; if it were not so, I would have told you; for I go to prepare a place for you.” —John 14:2 LSB

The Belfast townspeople were surrounded by enemies in 1969. They live in peace now, but people are never free of foes. We need constant reminders that enemies do exist. Throughout the Old Testament a Voice tells us who are enemies, physical and spiritual, are, and promises to cast them out. The Hittites and the Amorites and the Canaanites and the Jebusites are mentioned time after time in Book after Book so that we know that He is aware of what dangers lurk in our midst. But He has prepared a table for us amid those enemies. He leads us through green pastures, ones that probably contain poisonous plants and may harbor snakes. As our Shepherd, He goes before us to weed out that grass and disperse those snakes. If something wounds us, He heals those wounds, and after making the journey through those fields, He offers comfort to his worn and weary sheep.

“Belfast” is an imperfect film that makes a few missteps. A sermon given by a Protestant pastor is cartoonish in its sweat inducing, fire-breathing tone. The delivery makes John Lithgow’s feigned portrayal of Reverend Moore in “Footloose” look docile by comparison. The sequence seems out of place in a film that strives to keep its passions, and attitudes, under check.

For the most part, the film is sincere, full of genuine feeling, and a tribute to Kenneth Branagh, an accomplished actor and director, who above all, as the grandfather of his story tells him, will always be “Buddy from Belfast 15.”