for some violence, sensuality and brief strong language. 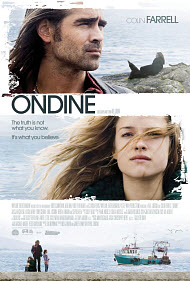 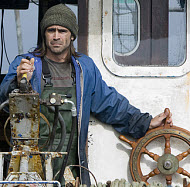 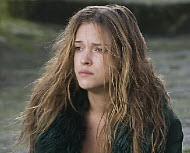 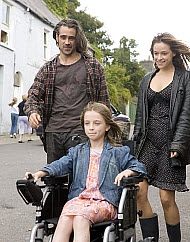 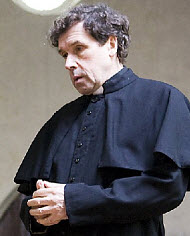 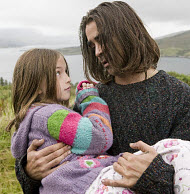 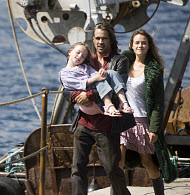 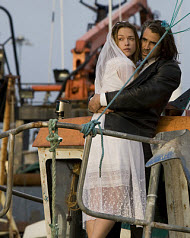 The art of fishing in the Bible

“The truth is not what you know. It’s what you believe.”

“Ondine” is a contemporary fairy tale, as well as a realistic romantic love story, all rolled into one dreamy package. The cinematography and acting are both sincere and gossamer. One seems to float right through it believing as much as the man and the little girl in this story, until the end when reality comes crashing down around the viewer, right along with its characters.

Syracuse (Colin Farrell) is a lone fisherman, a recovering alcoholic, and a divorcé who is a devoted father to his little wheelchair-bound daughter, Annie (Allison Barry) who also is on dialysis while she waits for a tissue donor for her failing kidneys. They reside in a small fishing village off the coast of Ireland, where everyone’s business is known. No secrets can be kept under raps for long in this village.

While trolling with his nets over an unresponsive ocean one day, Syracuse pulls in a mysterious woman who says her name is Ondine (Alicia Bachleda). He saves her life and puts her up in the cottage once owned by his mother. It doesn’t take long until rumors pass through the small village about Syracuse’s “water baby.”

The question of mysterious woman’ origin becomes even more intense in the mind of little Annie, as her father tells her stories of Ondine, a silkie pulled from the sea by a lowly fisherman. He finds that he is beginning to believe his own stories, as daily he takes Ondine fishing with him and as she sings over the sea, his nets overflow with an abundant catch.

Annie takes it upon herself to research the myths surrounding silkies (also known as selkies or selchies), mythological creatures that are found in Faroese, Icelandic, Irish, and Scottish folklore. They can shed their skin from seals to become humans. They have one wish they can bestow upon a human, and if they fall in love with a “landsman,” they can stay on dry land for seven years. They have seven tears that may be shed. If they bury their seal-coat and forget where it be placed, they can stay human forever. As little Annie becomes more and more imbued with this myth, the situation surrounding the mysterious Ondine’s appearance, her love of the sea, and her beautiful lyrical songs, seem more truth than myth, as the days pass by. Annie’s enthusiasm stretches out to touch her father, who falls deeply in love with the sensitive Ondine.

Not long after Syracuse gives in to his feelings for Ondine, a dark and brooding man named Vladic (Emil Hostina) arrives in the village. Ondine is obviously fearful of him and avoids him at every turn.

I will not give any spoilers at this point. Know that we do have a happy ending, but only after the real world comes crashing down around Ondine, Syracuse and Annie, who all must make hard decisions and come to grips with the actual truths swirling in their tumultuous world.

There is good reason for the rating of PG-13 for some violence, sensuality and brief strong language, and I would not let a child under the age of 14 see this movie without parental supervision.

“Ondine” is very enjoyable, but has some disturbing scenes in the end of car crashes, and violent men pursuing the family and possibly putting the child in peril. There is reference to a character drowning at the end, which may be construed as murder.

This is an Irish Film Board produced movie and includes many usages of Irish slang considered swear words in English. Words such as shite (sh*t in English) are used several times. The f-word is uttered four times, along with “piss-off,” and the Lord’s name used in vain two times. The Irish and Scottish dialect is heavy and sometimes not understandable, but not distracting. The two main characters are shown kissing and undressing, and although it is referred to that they have made love, no sex scenes are portrayed.

I would have more concern over the heavy drinking and how it affects the relationships of the characters. There is a strong Catholic presence in this story, as the main character is shown going to confession several times during the film. The priest is sincere and very patient. There are many light-hearted moments in the scenes with him, but the theme of believing in Jesus Christ and His work on the cross, or in turning to the Father in times of confusion and sin, are never mentioned. Too bad, as the scenes where our main character goes to The Church for guidance would provide the perfect time to interject the need for God’s strength into the script. But, I also must stress, this is a fairy tale-like film, and mixing the magical quality of the myth and the real assurance of Christian beliefs would make it one confusing story. Therefore, I would make sure, if watching this story unfold with a teen or pre-teen, that Christian parents use this time to point out that these characters would have found more peace in Scripture and it’s guidance, rather than to believe a myth.

All in all, “Ondine” takes it’s cue based upon the Celtic folklore of Silkies and should not be taken seriously. The fact that Jesus Christ is our strength in all trials and is our ever present strength when human strength and courage cannot be found, is to be taken very seriously. I couldn’t help thinking throughout this film, that if in this real world of ours, we all turned to Christ for help and guidance, what tragedies would vanish under His calming and reassuring Hand.

Neutral
Neutral—I decided to give this a neutral rating, because, for me, the movie was eye-catching. I started watching it on my own and was hooked after a few minutes. I am Irish, so I enjoyed the setting and dialog, as well as the accents. However, the accents were very thick, at times, and if the volume wasn’t cranked, it was hard to understand.

I was almost instantly happy that I did not watch this movie with my husband. Ondine’s character is completely seductive. The movie does a great job at making her appear innocent and doe eyed—and the idea is that she does not realize that she is sultry and attractive. However, scene after scene depicts her in ways that are sexual. One scene shows her steering the fishing boat with her foot… and she is bare legged all the way up to her thigh. Another scene, far worse, shows her emerging from the water wearing a see through slip of a dress. After that, she returns to the water to teach the little girl how to swim, and she is wearing her underwear… so on, so forth. Even when she is dressed in the Fisherman’s jacket, she is wearing only a short disheveled slip dress underneath, and she looks like she belongs in a Victoria Secret ad.

The love scene between Ondine and the fisherman does not show nudity, but it is definitely what I call graphic. This is all very disappointing, because it could be an interesting, and believe it or not, sweet movie. Of course, it is completely fictional, but the love that the characters have for each other is refreshing. The language in the movie is very unfortunate, as well.
My Ratings: Moral rating: Offensive / Moviemaking quality: 3½

Spring, age 36 (USA)
Negative
Negative—The story line was intriguing, since I enjoy some sci-fi/fantasy movies. The main thing I had a problem with was how Ondine was presented. She’s a beautiful actress, but she is sexualized throughout the film through what she wears, how she wears it, and even how she acts at times. Obviously she’s wet much of the time, which is understandable, but her short/low-cut dresses only accentuate her sexual appeal. In one scene she slowly comes up out of the water wearing a white floral print dress and it’s obvious she has nothing on underneath. Towards the end, she is shown swimming underwater in a short dress away from the camera, and you have a brief butt view. When Syracus brings her some clothes to wear, he isn’t in the room when she is changing, but the camera is and the way it goes about filming her getting into her new lingerie and clothing was seductive (this wasn’t a woman getting changed in a matter-of-fact way). In another scene she swims in her bra and underwear as she teaches Syracus’s daughter to swim. It just felt like I was watching a VS commercial, at times.

I also thought that the growing attraction between Syracus and Ondine could have been developed more (maybe it’s just a cultural difference as an American watching an Irish-based film?). There was attraction on Syracus’s part towards Ondine, but not as strong vise versa, then suddenly they were in bed together. It just seemed abrupt, not enough leading up to that point. I’m not condoning their having sex since the Bible still says this is sin no matter the situation. But if a couple were to build up on their infatuation or love for each other to ending up in bed, it wasn’t there. It was as though the only thing that brought them to this point was the seductiveness of Ondine which led Syracus to this point (he didn’t know anything about her).

Some other things in the film: Syracus struggled with an alcohol addiction (2 years without and counting…) and towards the end he gives in (FYI he gets drunk), but he seems to snap back to reality with the responsibility of caring for his daughter. Several swear words were mentioned throughout the film, hard to catch since it’s in Irish and Scottish accents, but with subtitles on, they’re right there.

The sex scene seemed out of place and unnecessary in the overall picture since there wasn’t a real strong leading up to that point. There was no full-body nudity or too much detail but you know what’s going on. Without spoiling the end of the movie, there is a heroin reference, a drowning victim, a car crash scene, all of which are essential to the story, but just FYI.

The only religion in the movie came from a Catholic priest so the hope was vague and no Gospel given. It ends on a good note which helps bring the movie to a semi-satisfactory close. The movie-making quality was great and the actors were well-picked.

The story had great potential but just seemed to be missing something. It felt like that hole was filled with extra scenes of Ondine’s sexuality, rather than better story-development.
My Ratings: Moral rating: Very Offensive / Moviemaking quality: 4½