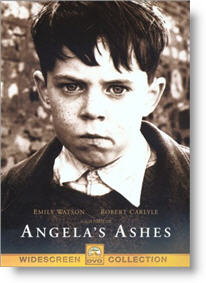 Based on Frank McCourt’s 1996 autobiographical memoir of the same name, this film is a sad slice-of-life in Depression and WWII Ireland. While it certainly deserves its R rating, it’s a serious (non-exploitative) film with a very realistic “feel.”

In 1935, after the death of one of their children, Frankie McCourt’s impoverished parents are persuaded by their extended family to take the children and move from New York back to Ireland. Frankie recalls: “I was the only Irish kid who waved good-bye rather than hello to the Statue of Liberty.” Back home in Limerick, things aren’t any better. The dampness and filthy living conditions bring many slum dwellers death from typhoid fever, consumption (tuberculosis) and other diseases. Frankie’s father has a hard time getting a job (he’s discriminated against because he’s a Scotch-Irish Protestant); and when he does find work he drinks up his first paycheck, misses his next shift and is fired. As the oldest child, Frankie is thrust into a “man of the house” role including hard work at about age 10 to help support the family. (Three different actors play Frankie as he ages from 5 to 16.) The role of the Roman Catholic Church in Irish family life is explored from many angles.

I found the story emotionally engaging throughout and consider it worth seeing (for mature audiences) on its own merits as well as to remind us how much we have to be thankful for. My own childhood was nowhere near as tragic as Frankie’s, but I could identify with some aspects of being raised poor (no indoor plumbing; being laughed at by other kids because of my funny shoes) and with many of the little-boy adventures.

Content warnings: There’s not much misuse of the Lord’s name, since most of the characters are practicing Catholics; but gutter language is strong in spots, although some is hard to catch if you’re not used to the Irish accent. Many of the Ten Commandments and their derivatives are broken repeatedly; there’s dishonor of father and mother (including violence), adultery (and other fornication), stealing, covetousness, lying, neglect of family responsibilities. Alcoholism is shown prominently, but is portrayed as evil. Frankie and his friends are caught spying on naked girls (frontal nudity visible), and are later shown engaged in group masturbation (discreet camera angles). One of Frankie’s schoolteachers openly wishes for a German victory in WWII as retribution for 800 years of oppression of Ireland by the English. Some of Frankie’s relatives have a fanatical hatred of anything Protestant-including Frankie’s “northern-texture” hair. When Frankie throws up shortly after his first Communion, his grandmother pesters the priest with detailed questions about the correct way to wash God out of her back yard. These are just a few of the items that would offend some or all viewers; there are many more. I’m trying to give a fair warning without revealing the major storylines.

Normally I wouldn’t recommend a film with this amount of questionable material; but for mature adults it’s a well-done (though unnecessarily graphic) treatment of a real-life story. Although the author approved this film, those who’ve read his book may be disappointed by any artistic-license changes to the story (I’ve only skimmed the book, so I have no opinion).

Monique Page, age 31
I have read the book and seen the film. The book was one of the “cannot put down” sort, well written and observed, I know because I have been through similar experiences… The first twenty minutes were depressing, but I persevered because I was curious as to how close to the book the film would keep. It was pretty good filming. I enjoyed it.

Anonymous, age 68, non-Christian
I haven’t read the book yet, but my husband has and said it accurately reflected the book. I am very cautious about R movies, but it was a very soft R, mostly for sexual situations (same as was in the book). Very little bad language and no violence. It was a well done movie. The central theme for me was his search for forgiveness for the bad things he did. I wanted to so badly for the Catholic Church to explain to him the forgiveness available in Christ, but again and again they failed to do that. In one scene there was a priest who seemed to reassure him of forgiveness, but in both of his books is he constantly looking for forgiveness. He appears to be a man open to hear about the grace of God and I pray that someday someone will have the opportunity to share the good news with him. My Ratings: [3/3½]

Kathy Nienhouse, age 50
Perhaps because I read and enjoyed the book, the movie was a bit of a letdown. The director did successfully capture the utter humanity—along with the humor. As a Catholic, it saddened me to see how the Irish church of that time discriminated against the poor. Although one Franciscan and one teacher in the movie were bright spots of hope. As a mother of 4, I would not allow my children to see it. Perhaps in their mid-teens, I will rent the video and watch it with them. But, I will make them read the book first! My Ratings: [3/4]

N.Fox, age 43
We are given a view of the miserable and harsh reality that characterised the lives of those who were relentlessly confronted with tragedy and the struggle to survive in the poverty stricken west of Ireland in the 30’s and 40’s. It’s not an inaccurate depiction given that it is based on a true story of the childhood of Frank McCourt and probably typical of thousands of his fellow countrymen and women. The dreary and perpetually rain sodden Limerick town serves as an allegory for the misery of the townsfolk and the flow of the Shannon River out of Ireland into the Atlantic, symbolical of the way of escape to America. The performances are exemplary, led by the Robert Carlyle as Franks alcoholic father and Emily Watson as his long-suffering mother. Here is a real slice of life, unpleasant as it often is. The human condition is laid bare in all its frailty: moral compromises, impure language, carnality, drunkenness, violence, theft—it’s the world we live in. The church is portrayed as irrelevant and unsympathetic as an institution, but compassionate and full of understanding at an individual level. There is a positive emphasis on the value of education and practical belief in a God that forgives. My Ratings: [5/5]

Steve Mac, age 39
Just a word of warning: there is what seems to be a long nudity scene containing several girls bathing where young boys are peeping in. But overall it was an okay film, just not worth the ticket price. See it on video. My Ratings: [3/3½]