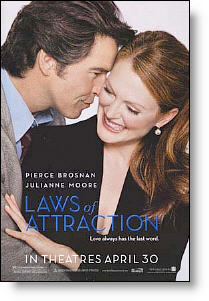 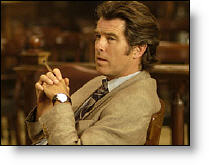 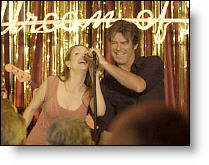 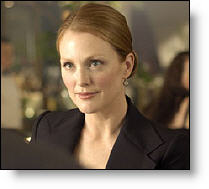 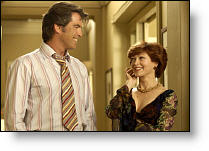 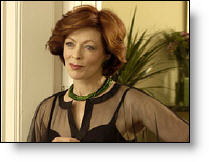 “Getting married is a great way to fall in love.”

Here’s what the distributor says about their film: “High-powered divorce attorneys, Audrey Woods and Daniel Rafferty, have seen love gone wrong in all its worst case scenarios—so, how bad could their chances be? At the top of their respective games, Audrey and Daniel are a classic study in opposites.

She practices law strictly by the book; he always manages to win by the seat of his pants. But soon they are pitted against each other on opposite sides of a nasty public divorce between famous clients, with the case centering upon an Irish castle that each future divorcee has their sites set on.

Audrey and Daniel travel to Ireland to chase down depositions, yet the two lawyers, who have been slowly developing a mutual attaction that neither wants to acknowledge, find themselves thrown together at a romantic Irish festival. After a night of wild celebrating, they wake up the next morning as man and wife. Maybe getting married first is the best way to fall in love.”

See our interview with the Director and leading cast members.

If all is fair in love and war, then “Laws of Attraction” makes a case against using rules for the simple impulse of being attracted to someone. Debunking some of these ideas are good, while some are not; but the overall effect of this story provides laughter and love—even correction—to the ugly cultural problem of divorce.

Though it is compared to earlier romantic comedies such as “Adam’s Rib,” this contemporary story is set in New York City involving divorce lawyers Audrey Woods (Julianne Moore) and Daniel Rafferty (Pierce Brosnan). Being on opposite sides of the same case, Daniel and Audrey struggle to keep their interest in each other as professional as possible. However, they find it difficult to keep their romance under control—especially once they get married. In the midst of a divorce trial for an over-the-top rock star (Michael Sheen) and his fashion designer wife (Parker Posey), Daniel and Audrey go through their own trials as they begin to discover what it means to truly be committed to someone.

To kick off her law breaking, Audrey decides to go on her first date with Daniel outside of a work environment. While at dinner, Audrey can’t help but relate to Daniel competitively, and manages to challenge him to a drinking contest. This leads them both to excessive drinking, followed by the allusion that they sleep together. We see them kissing, but after that only see a shot of the floor with clothes being flung onto it.

Also, while the two are in Ireland, Daniel participates in a drinking contest at an Irish festival, but he is not shown being inebriated. It’s also in Ireland when Daniel and Audrey wake up in bed next to each other, concurring that they have officially tied the knot. Here Moore shown in her undergarments, but is also covered by a sheet. There is one instance, too, involving Audrey walking in on the rock star and his wife in an intimate situation, but like all the other scenes there is no nudity.

Eventually, Audrey has to take down the defenses she has created in her life, specifically in terms of getting married. Initially she is cynical and jaded, and tells Daniel that she thinks, “Marriage is dead in the water.” Audrey is as a hard-core, overachieving, sophisticated professional, but eventually has to break her rules and forsake competition with Daniel in order to have the relationship with him she really wants.

Although this story essentially belongs to Audrey, director Peter Howitt worked on developing Daniel’s character as much as possible. Originally interpreted as “lounge lizard that has no moral fiber” Howitt made Daniel a man who is constant in his feelings towards Audrey, and one who realizes he must engage in a healthy kind of “fight” in order to preserve the relationship. What impressed me most about Daniel is how he exemplifies Christ in His loving pursuit of each of us. It is that constant love that can eventually win us, even though we may be fickle, irrational and cruel in our response to Him.

This movie tends to be predictable, but does manage to offer encouraging thoughts and refreshing ideas toward marriage. An early scene involves both Daniel and Audrey presenting speeches at a divorce seminar, in which Audrey purports that “divorce doesn’t have to be agony”—almost as if she is encouraging divorce. Surprisingly, Daniel immediately follows her speech by showing disdain for lawyers and dissuading them as much as possible from getting a divorce.

In terms of situations and subject matter, this movie appeals mainly to adults. There is some crass language, but it is mostly free of profanities. And it was fun seeing Julianne Moore enjoy a kind of role she really didn’t have to take too seriously.

Neutral—This movie is not a total waste of time, but it’s nothing spectacular, either. Most of the characters are stereotypical: a hard-driving career woman who doesn’t have time for a relationship, a rakish charmer who takes a liking to her, a merry divorced socialite who won’t act her age, etc. This film gives offers an argument against using divorce as a solution for marital strife, but the message is muted under premarital sex, risque jokes, and foul language. Leave the little ones and teens at home if you see this movie.
My Ratings: [Average/3]

Hillari Hunter, age 42
Comments from young people
Neutral—The sexual intimacies and innuendos were quite unnecessary, but Pierce and Julianne were believable. Perhaps not their best roles, but not their worst. The underlying stress that perhaps sexual intimacy before marriage is more hassle than pleasure was somewhat played out. The moral ethics of both Brosnan and Moore were perhaps downplayed, but their discourse within the courtroom was at times funny, at times vague, and at times downright transparent. Overall, not something to take the kids to, but alright for mature teens and adults, with a weak ethic and strong intent to please. Overall, nothing strikingly particularly offensive, save a few rowdy jokes and perhaps moments of material unsuitable for younger people. However, the storyline did project a moral intent in the way the actors displayed their anger, their contentment, their grief, their glee. The actors and actresses gave concise, and sometimes witty reasons for their actions—overall—and the dialogue and setting were superb. Notwithstanding, the music might have been a tad more suiting and the storyline a little more full, but a good movie.
My Ratings: [Average/2½]

Pete D., age 15
Neutral—This movie is predictable and not worth the money. Certainly not for kids or teens. Full of premarital sex and sexual innuendo.
My Ratings: [Very Offensive/3]