for action violence and some sensuality 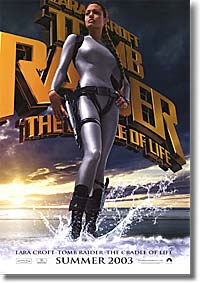 Cradle of Life is quite theologically challenged, as are most modern movies. Lara Croft goes off in search of “Pandora’s Box” (where Croft contends all life began) in order to keep it from falling into the wrong hands. Supposedly the box now only has “death” inside of it instead of “life,” which leaves the viewer wondering throughout the whole film where all the “life-giving” material/powers went and where the “death-giving” material/powers came from.

The movie cleary supports an evolutionary worldview and several of the main characters (including Croft) have a rather disturbing disregard for death. The movie has some scenes of rather gruesome violence/death, especially near the beginning. Croft seems undaunted by her brushes with death and actually seems to get a major thrill from the action. This is a bit confusing because Croft is supposed to be fighting for life/humanity, but actually SMILES as she kills the enemy.

In terms of picture quality, the final scenes of the movie are very disappointing, although the high-tech equipment Croft uses is somewhat impressive. The ending is very anti-climatic and predictable, with no major twists in plot. The basic plot line is layed out within the first forty-five minutes of the movie.

A major theme of the movie is portraying Croft as the epitome of “cool.” Her persona is one of someone who believes that she knows everything. Croft has complete control of her world, and most of the rest of the world around her.

In one of the few sexual scenes, Croft shows that she is willing to sacrifice her body for the sake of the mission. There are no actual scenes of true nudity, but plenty of implied sexuality that is inappropriate for children.

In sum, “Cradle of Life” is a rather shallow movie in terms of plot and is really quite predictable. The lack of character development, etc. suggests that the movie is targeted towards a young audience, but the movie is NOT appropriate for young children. There is a good amount of violence and sexuality, and Croft’s attitude is disturbing. If I took my child to see this movie, I would feel embarrassed for exposing them to several scenes and would regret having taken them for those reasons. I would also have to explain to them why the evolutionary plot lines/worldviews are false and would have to explain the moral issues I would have with the movie.

To learn about evidence against Evolutionary theories, see our Creation SuperLibrary

Older teenagers should be in less danger from this movie, because they have a more mature worldview and can more easily distinguish between the falsehoods and moral issues within the film.

Positive
Positive—I liked the movie very much other than a few words of bad language. Other than that it was very action packed from start to finish.
My Ratings: [Excellent! / 4]

Sue A., age 51
Neutral
Neutral—We went to see this movie this evening having quite enjoyed the first one. I must say we were a bit disappointed in the pacing of this film. It was very slow moving. We found it difficult at times to keep track of who were the “bad guys.” We didn’t go into it expecting anything of biblical proportions knowing that the main aspect of the film was based on a Greek myth. There was a time in the film that the main character was trying to explain “The Cradle of Life” where there was some license taken even for myth.

The creation of life seemed more Buddhist than Greek in that scene. We actually own a copy of the first film, but am not sure we would add this one to the set. The action in the movie was very well done, but nothing really original as it was in the first movie. Not sure really what was missing except you left the movie feeling as though something definitely was missing. Too bad. I definitely would not take children under the age of 13 or 14 to this film. Not sure I would take them to see it in the theater at all. I would allow them to watch it once it came out on DVD and sit to watch it with them. There were many very intense scenes of violence and some very scary scenes.
My Ratings: [Average / 3]

Lydia, age 46
Comments from young people
Neutral—This movie had a very good plot, a better plot than the previous one, but I didn’t like it very much. It was weird, especially near the end, where the movie took a turn into ancient African religion and the characters encountered strange creatures. It also had a sensual scene. It was very and unneccesarily violent, and during the violent scenes many characters used knives. It was pretty graphic. I liked the first “Tomb Raider” much more than this one.
My Ratings: [Average/2]

Brittney, age 13
Positive—I enjoyed this movie much more than the first. I do have a background in the game; my sister and cousins are crazy about it and talk about it all the time so I know enough about the game to enjoy the movie. The first one was incredibly boring, this one is a lot more enjoyable, however I didn’t like the description of how life started and there were some scenes that I had to cover my 4 year old sisters eyes on, but for the most part it was a good “see a couple times” movie.
My Ratings: [Very Offensive / 4]

Jonathan Foreman, New York Post
…there’s no pacing, no suspense and no vulnerability for the protagonist so it all soon gets numbingly tiresome…

William Arnold, Seattle Post-Intelligencer
…the good is not worth the trek through the violence, sexuality and bad language…

Preview Family Movie and TV Review
…the cinematic equivalent of getting blasted in the face with a Super-Soaker; it’s a stinging, immature assault that’s not terribly pleasant…

Bob Smithouser, Plugged In!, Focus on the Family
…low on profanities… and even lighter in sexual content… Yet some parents may object to the many scenes of violence…