Today’s Prayer Focus
All Aboard America
MPA Rating: Not Rated (but it would likely be a “G”) 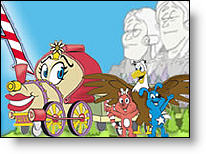 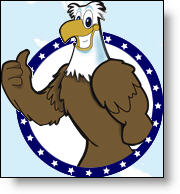 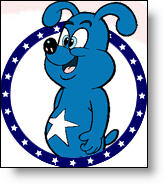 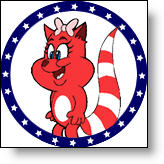 “Greetings Young Americans” is the invitation of Rudy B.E., the original American bald eagle who has been around since 1776 to witness and guard our American Heritage first hand. He takes Stars, the ice cream loving pup, and Stripes, the cutest little kitten, on a fun filled journey across America to visit and learn about many of our most popular monuments and historical figures.

This little cartoon is a clever, entertaining way to get younger children to have a fun sense of their American Heritage. It is an International Film Festival award winner. Accolades come from Larry King saying it is “great family fun,” which, for the most part, is very true.

In the kindergarten classroom we find our little heros learning about our American History. As nap time starts the teacher tells her young charges to “close your eyes and let your dreams be your guide.” Stripes dreams of seeing all the fantastic things our great nation has to offer while her best friend Stars, wants only to dream of amusement parks and ice cream.

We then enter into their dream-fantasy as they meet up with Rudy B.E. (Bald Eagle) as he sets out to inspire Stripes and convince Stars that our American heritage is vibrant and full of life. The three set out on an American adventure meeting up with Dolly Ding Ding, the cheerful steam engine, who transports them all to the country’s most awe-inspiring landmarks. The foursome enthusiastically sing 10 classic all American songs along the way.

Children from three to about ten will really enjoy this musical adventure where they will visit the Grand Canyon learn about who sewed the first American flag, how Lewis and Clark were helped by the brave Indian guide Sacajawea and the building of the transcontinental railroad. A visit to Mt. Rushmore introduces kids to four of our most respected Presidents in song (“four of the most famous guys in rock”) and a musical jaunt through Washington D.C. touches upon images of The White House, The Washington Monument and The Lincoln Memorial. We end up in New York as our final destination and The Statue of Liberty (described as America’s Symbol of Freedom).

Rudy B.E. teaches our America is a place of brotherhood. A land where you can have any “flavor” (making reference to Star’s love of all kinds of ice cream) you want as far as choices of education, careers, places to live, voices of expression, etc. A wonderful place to learn about new places and people. As Stars and Stripes end their “dream,” Rudy leaves them with this inspiring oratory:

“The spirit of America is all around us
In the music, in the places and in the
Hearts of every girl and boy.
If you can dream it, you can do it!
You decide who you are and
Who you want to be and what you
Want to do with your life…
Because in America anything is possible!”

The DVD includes the options to “Play movie,” “Continuous play,” “Play all songs,” and a bonus feature game “Rudy’s Trivia Match-Up.” It is fun and entertaining, although no mention of God, but all verses that refer to God in our American songs were included and not shortened, left out or changed. The continuous play option will be great for the kids, but understandably will drive parents crazy! The option to play all songs was enjoyed by all my child watchers and they used this one even more than the game feature. They really liked singing along, the favorite of the younger age group (7 months to 3 years) was Home on the Range and the older guy (5 years old) played Stars and Stripes Forever over and over because he wanted to learn the words. The parents would have liked the words to have been included at the bottom of the screen or a sort of “bouncing ball” effect to help older kids learn the words.

The trivia match-up game was very educational and fun. Played like the kids card game “Memory,” children select from “people,” “places,” “monuments,” and “characters” and flip over cards to match answers. Unfortunately, after two times around they all new the answers and stopped playing. Kids from second graders to fifth graders will be able to recognize most of the images because of school, but younger children will need Mom and Dad to help and discuss people, places and concepts. This DVD can definitely be used for family education and as a springboard to understanding our heritage, diversities and Government.

The disappointments were that “The Pledge of Allegiance” was nowhere to be found, our most important element to why our great nation was founded was for religious freedoms and not discussed, and that George Washington was surprisingly absent. Also at the end you were encouraged to go to the Web site www.abamerica.com for more, but when we went there the only things we found were a short synopsis of the story (which we already knew) and a way to purchase the DVD and the soundtrack. We were hoping to find more educational games and info about America and it’s colorful history and the diverse peoples who founded it.

All Aboard America is aptly dedicated to the children of America. The screenplay is by Austin Bander, Iyan M. Bruce, Todd Radnitz, and Kimberly Laux who have made a valiant effort to convey a patriotic message. At times it is energetic, but not uplifting. Kids will enjoy it for it’s color and music. The music was arranged by Red Young and compiled by Bill Ungerman.

The message that in America anything is possible is a passable statement, but we must also educate our children that the missing element for far too many is GOD with whom ALL THINGS ARE POSSIBLE. It is sad that with all the technologies we have at hand in this century, we cannot use them to help our children learn that in 1776 a Great CHRISTIAN Nation was born out of much sacrifice. People came across the seas under sickness, strife and some to certain death to start a new life. So urgent was the need of these brave men and women to have and hold onto God in a democracy that states: ONE NATION UNDER GOD! Let us also be brave enough parents to pass this great legacy onto the children of this generation so that they may be brave enough to pass it on to the next.