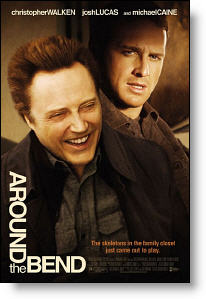 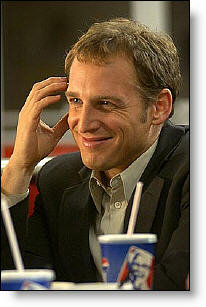 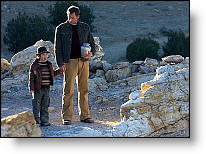 “The skeletons in the family closet just came out to play”

Here’s what the distributor says about their film: “Four generations of men are suddenly brought together by the chance to uncover the truth about their family’s past. It’s a journey that takes them out on the road to a world full of surprises—some comic, some dramatic, and all of them personal.”

I was upset when “Around the Bend” wasn’t released in any theater remotely close to me. I had been assigned to review it, and was very much looking forward to it. The previews seemed to promise an earnest drama about a few generations of men trying to come to terms with past sins. But, as I finally got to see it last night, after spending four dollars to rent it, all I could think was “I am sure glad I didn’t have to waste my money at the theater on this.”

As “Around the Bend” opens, we meet Henry Lair (Michael Caine), a seemingly bed ridden elderly man who lives with his grandson Jason (Josh Lucas) and great-grandson Zach (Jonah Bobo). He has a Danish nurse, Katrina (Glenne Headly) who lives with them and takes care of him. Whatever illness he has permits him to walk and dance around the house. (We can’t help but wonder what he suffers from, because he seems to have little need for the nurse.)

Jason’s father Turner (Christopher Walken) shows up at the house unexpectedly; Jason hasn’t seen him since he was very young and spent most of his life being raised by Henry. Jason isn’t very happy to see him, but Henry and Zach seem glad that he has arrived. Turner says he can’t stay long, and plans on leaving the next day. His plans change, however, when Jason gets a call in the middle of the night saying that Henry has gone back down to the KFC and has died at the table.

Henry left behind instructions for the men, in the chicken bag, of course, and tells them to cremate his body and take his ashes to New Mexico. There is just one rule though, they must stop at KFC’s along the way, and spread some of his ashes at each one.

So the men set off to fulfill Henry’s wishes, and head for an emotional showdown between father and son, where painful secrets from the past, and the present, await them.

All of this sounded intriguing to me, and on paper, it still sounds interesting. But. something happened on the way from page to screen that turned a creative idea into a mindless film. It is like the writer couldn’t decide whether to make this a comedy or drama, and then decided to mix the two like a bad chemist.

Every character has at least one quirk to their personality, yet none of them feel authentic. The character of the nurse was probably the thing that bothered me the most. We never see her work; the man she is watching seems capable of taking care of himself. Glenne Headly plays Katrina, and she is a fine actress in her own right. But, first time writer and director Jordan Roberts makes the mistake of thinking it would be funny to give her an accent and make her a fish out of water in America. It comes off like a bad comedy sketch, and further magnifies all of the film’s other bizarre eccentricities.

Most audiences won’t care much about the characters because they all seem fake. People like this probably exist in real life, but having them all in one film is way too much to handle.

The film contains language, with a number of F-words and various others. Sexually related dialogue is also present. The most disturbing aspect of the film is that the adults have no filter on their mouths and swear up a storm in front of the child, and then engage him in some of their frank sexual discussions. Parents probably won’t have a problem keeping their kids from wanting to rent this, but just in case you are wondering—it isn’t appropriate for children or younger teenagers.

“Around the Bend” had potential to be something far better. It does contain a few good messages about forgiveness, and the final scenes give a glimpse of what this movie could have been. But, in the end, not even the likes of Michael Caine or Christopher Walken can save this odd film from disaster.

Movie Critics
…Although the story often feels contrived, honest performances and smart direction keep the film just the right side of sentimental…

Richard James Havis, The Hollywood Reporter
…Walken is deliciously offbeat, but the plotting is so contrived and unconvincing that Bend tastes more like emotional leftovers…

E! Online
…the longest 85-minute road trip you could imagine…

Bob Strauss, L.A. Daily News
…What’s truly astonishing about this mass of chewed-over material is that, according to the production notes, it’s been in development for over a decade, and has gone through 37-count 'em, 37-drafts…