In the Face of Evil: Reagan’s War in Word and Deed

for disturbing images of violence. 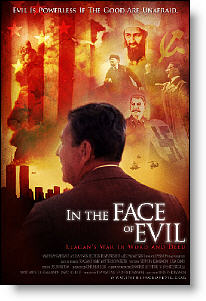 “Those who do not know or understand history are doomed to repeat it.” This quotation underscores the value of this documentary. The film mostly uses film archives as well as comments from ten individuals who lived and participated in the events of the Reagan years. The film sets the background for who Ronald Reagan is and how he came to have his strong worldview and courage. It also illustrates what happens when the leadership of this country are too conciliatory to those who oppose us and our worldview of the basic freedoms and democracy for every individual. The counterpoint of those who have led by fear and repression is the subjugation of religion, free press, free expression in art, and free thought. Fascism, Nazism, Communism, and now Terrorism have all rejected man as an individual spirit with individual rights and freedoms.

Prime minister Margaret Thatcher was reported as describing Reagan as “putting freedom on the offensive where it belongs.” The film gives an excellent understanding of the multifaceted strategy Reagan used to bankrupt and bring down the Soviet empire. The show is worth seeing for this alone.

This is an excellent documentary to see before the upcoming elections. Help get the word out regarding this important film.

Here’s what the distributor says about their film: “He freed a billion slaves from their Communist masters… This is the story of that achievement: of one man’s triumph during the bloodiest and most barbaric century in mankind’s history: the 20th century.

“In the Face of Evil: Reagan’s War in Word and Deed” is a man and nation’s journey through the heart of darkness-and what that journey means for us today. This film is not a biography of Ronald Reagan, but a hard-hitting look at leadership and moral courage. Based on Peter Schweizer’s acclaimed bestseller, Reagan’s War, the new feature-length documentary film, “In the Face of Evil,” chronicles the brutal conflict between totalitarianism and freedom as seen through Ronald Reagan’s forty-year confrontation with Communism.

Reagan’s struggle began in direct conflict with Soviet-backed street-level violence during Communism’s attempt to take-over Hollywood during the 1940s; it continued through his “wilderness years” on the mashed potato circuit in the 50s, then on to his confrontation with the radicals at Berkeley in the 60’ss showing, throughout, his challenge of the Establishment’s policy of détente, his steady rise to power, his rejection by his own party, and his focus on the need for a complete victory over Communism.

More than a traditional war film, In the Face of Evil plays out on an epic scale… from the back-lots of Hollywood, to the jungles of Central America; from the mountains of Afghanistan, to the palaces of the Kremlin; to the Brandenburg Gate in the heart of a divided Berlin…”

“I have to believe that the history of this troubled century will indeed be redeemed in the eyes of God and man, and that freedom will truly come to all. For what injustice can withstand your strength?”
Ronald Reagan
Moscow, 1988

“In the Face of Evil” details, for the first time, with never-before-seen footage, the top-secret plans of Reagan and his inner circle… and their brick-by-brick takedown of the “Evil Empire.”

… from the oil fields of Saudi Arabia to the streets of Warsaw; from the trading floors of Wall Street to the vast steppes of Siberia… the plan encompassed covert ops, a massive arms buildup, and economic and psychological warfare-all conducted on a scale never seen before.

With the world mired in the beginnings of a new global conflict, In the Face of Evil is more relevant today than ever. The film affords profound insights on the brutality of the last century, and offers a prism through which we can gain perspective on the bloody conflicts that stretch ahead.

“You and I have a rendezvous with destiny. We will preserve for our children this, the last best hope of man on Earth…”
Ronald Reagan, 1964

Comments from young people
Positive—This movie was an excellent production, although it seems like it isn’t getting as much publicity as Michael Moore’s “Fahrenheit 9/11,” which is very sad because that movie is extremely misleading and is filled with lies. This movie, however, is filled with education and is not purely one-sided. Some pretty chilling quotes from past dictators. Overall, I would definitely see this one again with other people and probably am going to buy it if it comes out on DVD.
My Ratings: [Good/4]

Steven Mercadante, age 17
Movie Critics
…The must-see movie of the season… disturbing and deeply-moving… I found myself weeping…

Dr. Tom Snyder, Movieguide
…A powerful portrayal of a critical point in history that exposes the intensity of the struggle against communism and President Reagan’s campaign for victory. As someone who had lived these times, I was very moved by the detail and emotion in which they were brought out on film. The lessons of our struggle against the evil empire are more relevant than ever in regards to the conflict of today’s world…

Rush Limbaugh
…Could I imagine a better movie about the drama of good vs. evil in our time? Yes. But I emerged nonetheless grateful to spend a few hours in the company of great men, such as Reagan.