for thematic elements and some scary images 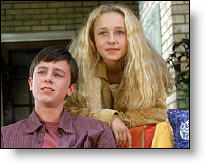 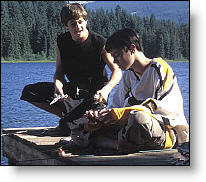 Are you SURE you know the answer this extremely important question?
Find out!

If God knows I am HURTING, why doesn’t He help me? Answer

“The courage of one boy, the heart of one girl”

Here’s what the distributor says about their film: “THE DUST FACTORY is an adventure about the love and friendship between two teenagers who help each other through a difficult time in their lives.”

“It’s dust to dust until we learn how to trust,” sang contemporary Gospel musician Keith Green—an axiom that readily relates to themes in the film “The Dust Factory.” Emphasizing ideas such as trust, believing and faith, the story contrasts them with fear, doubt and being afraid, and sets them in the specific context of a young boy who struggles after the passing of intimate family members. The result is ultimately an encouraging one, offering grandfatherly wisdom and childlike fun along the way.

Ryan Flynn (Ryan Kelley, “Mean Creek”) had the misfortune of seeing his dad killed in an automobile accident and has since had severe social struggles, particularly with the simple function of talking. After failing to perform a burial duty at his grandmother’s funeral, Ryan literally sinks further into his problems when he and a buddy go fishing and Ryan falls from a bridge down into the river. Entering a kind of fantasy world, Ryan connects with his grandfather (Armin Mueller-Stahl) in a new way, and is led by a kind of female Peter Pan, Melony (Hayden Panettiere), to a circus-like Big Top called The Dust Factory. It’s here that Ryan must face his deepest fears before returning to his normal life.

While this film embraces some serious issues, it does so in a way that is relevant to young people, employing elements such as fantasy, adventure, and a kind-hearted mentor relationship between Ryan and his grandfather. At the same time, the issues of death and dying are consistently addressed, specifically in terms of how we choose to live our life in light of this inevitability. Ultimately the story is set as an encouragement to enjoy our journey on Earth.

Regarding the issue of death, there is one flashback where we see Ryan’s dad in the accident where he died. It is very brief, and hardly violent, visually. Aside from that, no foul language was detected either. The most objectionable thing is one scene where Melony teases Ryan regarding his type of underwear.

As an ardent astronomer, like his dad, Ryan has been enchanted by the picture of the “Man in the Moon.” Since he was a child, his dad taught him to look through the telescope and try and find this image, but it wasn’t always easy for Ryan. Later in the film, Ryan admits that it took him a while, but he was finally able to see the Man in the Moon himself. For me, this image provided an interesting metaphor for God. Sometimes in our life it takes a while for us to finally see Him—even though He has been there all the time.

Speaking of God, there is also one scene where Ryan’s friend is trying to console him over the loss of his grandmother. After a near bicycle accident, Ryan’s friend encourages him, explaining that his grandmother is in heaven. When Ryan is expectantly silent, his friend asks, “Are you an atheist?” and then states, “If there weren’t a God, that would be harsh.” It was a sensitive moment of a simple kid expressing simple faith in God.

One of the biggest elements of this film to appreciate is the relationship between Ryan and his grandfather. Grandpa Randolph again and again offers stories, insight and wisdom to Ryan as he endeavors to engage in life again. Ryan’s relationship with Melony is also a key aspect in his journey, but it seemed they could have downplayed the romance between these two a bit. But the genuine friendship they establish through the story is a very positive one.

Talking to actor Ryan Kelley in an interview, he explained that relating to girls was no difficulty for him since he had grown up with so many sisters. Child number five of fifteen and currently the oldest one living at home, Ryan explained to me that the girls outnumbered the guys in their family. He also informed me that some of these kids have been adopted and include Guatemalan and Vietnamese backgrounds.

Being his first character role, Ryan believes this story involves some great morals, such as conquering fear, and includes such values as friendship, love and older people mentoring the young—which Ryan says we don’t see a lot of lately. Ryan says there are many great things in this film, including the issue of faith.

This is a tender movie that confronts some of life’s significant troubles, but it holds them securely in the arms of caring relationships and encouragement. Some of the special effects are distracting, but some good production quality here, with Armin Mueller-Stahl’s acting being the most significant contribution. Overall, there are some good things to take away from this movie experience.

Positive—This film is excellent both from a Christian standpoint and from an entertainment standpoint. This film deals with the subjects of being healed after losing loved ones, as well as developing strong friendships. A young boy ends up in a fantasy type world after falling off of a bridge, and meets a sweet, attractive girl around his age. She helps him get used to this fantasy world, and she demonstrates a sweet, perky, likable personality. The boy’s grandfather, who has alzheimer’s, is also there, but he is fully coherent and healthy in this fantasy land. Both young people learn about love, courage, faith, and friendship from each other and from the boy’s grandfather. This film is excellent, and is a little like a twilight zone episode, except is deals with Christian themes instead of science fiction. Overall, I heartily recommend this film. It has all the elements of an entertaining film, but without the unnecessary filthy language, violence, and nastiness that are rampant in many films these days. This film provides a relaxing 2 hour break from the pressures of everyday life.
My Ratings: [Good/5]

Fred, age 24
Comments from young people
Positive—I loved The Dust Factory. I have watched at least 6 times since i got it, and I just got it a couple days ago. It really showed me that I shouldn’t be afraid of life and death. That I should just live my life to the fullest. It showed me that God is there for me when I need him. God is like the man in the moon. He is always there but you have to look for him the right way.
My Ratings: [Excellent!/5]