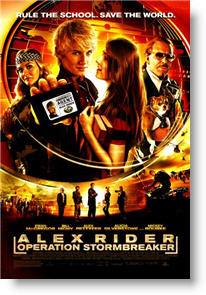 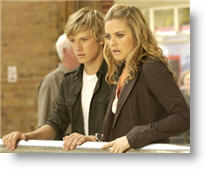 “You’re never too young to die.”

Here’s what the distributor says about their film: “Based on the best selling young adult adventure series of books by Anthony Horowitz, ‘Stormbreaker’ is a family movie about a kid who becomes a young James Bond. Alex Rider (Alex Pettyfer) is 14-year-old orphan who has been unwittingly trained all his life by his uncle (Ewan McGregor) with the skills to become a secret agent. After his uncle dies, Alex finds himself forced against his will to take on a dangerous mission for the British secret service and attempts to stop the evil mastermind Darrius Sayle (Mickey Rourke) from releasing a biological weapon via his brand new, high tech Stormbreaker computers.”

Comments from young people
Neutral—I am only giving this a “neutral” rating because I liked the book so much. Stormbreaker was not a very offensive film, though there were several killings that were implied. A comment that might offend some people is one that Jack Starbright makes, “The problem with this country (referring to England) is that all the good-looking men are either gay or married.” Another comment refers to evolution. From a critic’s perspective. the filmmaking is okay, and the acting is sub-par. To me Stormbreaker is too stupid for the older kids and too scary for the younger ones. Don’t waste your time or money.
My Ratings: Better than Average / 2

Benjamin Layman, age 14
Neutral—…Might offend some people, but overall it’s pretty good. There are some killings, yes, but nothing’s shown. Probably the worst part was when a woman is stabbed with a puffer fish’s spines, and you see a slightly bruised wound later, but it’s not too bad.
My Ratings: Average / 4½

Colin Soden, age 14
Neutral—I read the book before I saw this movie, and I must say, I was a bit disappointed. In my opinion, the book was better. The movie itself, as it was a lower budget film, the movie-making quality was below average. Certain parts were very unrealistic or obvious. The actors were average. There were a few very good actors in the cast (Macgregor, Nighy), but a few that weren’t as good. The plot was interesting enough, but too hard to follow. Crucial plot points flew by very quick, and if you hadn’t read the book, it would be hard to know what was happening.

As for the biblical point of view, there wasn’t anything really offensive. There were a few suggested deaths, but you never saw it really happen. Then there was a bit of martial arts violence, but it wasn’t extremely violent. And there was only one line that involved marriage gender choices, if you know what I mean. Evolution was only mentioned once, talking about jellyfish that were “millions of years old,” but if your kids already know that’s not true, then it’s not a problem. If you have kids that enjoy action movies, but can’t see something like “Mission Impossible” or “Pirates of the Caribbean,” you can take them to see this, as it is an action movie they will enjoy, but you don’t have to worry about it being to scary.

I would suggest no one under eleven seeing this movie in the theaters. Nine and ten year olds might enjoy it, but I think it would be best to wait for the DVD at home to show it to them.
My Ratings: Better than Average / 2½

Andrew, age 14
Negative—I wish that I never watched this movie! There was far too much killing, although not much is shown, it is still graphic. My favorite movies are the “Lord of the Rings” movies, and I found this movie, very unsuitable. One example is at the beginning of the movie a senior couple is blown to bit’s, this kind of “action” continues thought the whole movie. I think in the first two minutes ten people had already either been shot or blown up. I highly advise you not to take your girls, or little boys to see this movie.
My Ratings: Offensive / 3

Emily, age 13
Positive—First, don’t be fooled by the odd DVD cover, I think something went seriously wrong in the art department… Do keep in mind that Alex Rider is above all, a teenage spy movie. If you are completely against violence of any sort, don’t expect it to be like “A Little Princess.” Having said that, I am surprised at all the negative comments, because I loved it! Compared to all the PG movies I’ve seen (and I have seen many) it was surprisingly clean. There was not a single curse word, the worst being, “heck” (even the rough military men never use anything worse), and although Jack Starbright’s comment at the table about all the good looking men in England being either gay or married was unnecessary, it’s the only really objectionable thing I noticed.

Yes, a couple men are killed in it and a puppet show is blown up by the bad guys, but you never actually see anyone lying dead. The most gory/bloody part is when Alex gives his school report and there’s a flashback of Jack taking care of a skinned knee. But honestly, who would go see a spy movie and expect the main character to be investigating suspiciously colorful daisies and butterflies? There has to be peril and evil in it to make the bad guys well—bad guys! The fight scenes are dramatized by background rock music, but the only words audibly sung are, 'Ready, steady, go!'

I have read the Alex Rider books, and though exciting and action-packed, they are much more objectionable than anything in the movie. I would not recommend the books to anyone under the age of 12 years As for the film making, I think the fight scenes were brilliantly choreographed, the road chase scenes were absolutely thrilling, the sets were well constructed and the acting was great! Especially the characters of Alan Blunt (Bill Nighy) who is the eccentric and often hilarious head of MI6, and Alex Rider (Alex Petyffer) himself. If you’re into spy movies, skip the worthless Cody Banks and watch the brilliant and British “Alex Rider: Operation Stormbreaker” instead.
My Ratings: Better than Average / 5

Bethany, age 16
Positive—I read the book before I saw the movie, and I liked the book better because it went into more detail. I didn’t think this movie was offensive, but they could have done a better job. There were some unrealistic parts, for example, the jellyfish. There are some killings, and the movie was based on killing the kids in England. Nothing bad happens. The book was a lot better. I really liked this movie, and I was excited that they made one of my favorite books into a movie. I would suggest that no one under six see this movie, although it’s not a scary movie. I was disappointed that they didn’t follow the book, and I hope they do a better job on “Point Blank.”
My Ratings: Good / 4½

Andrea Buchanan, age 12
Neutral—The reason that I rated this movie as an “Average” is because I have to admit that I was extremely shocked when I saw this movie, in terms of how the immorality was a lot higher than I was expecting. Even for an action movie like this, the characters were just so evil-looking, and the movie itself left my conscience feeling dirty. I felt so awful that I took my little brother to see it, not realizing how bad it would be.

Although the acting was OK, and the music was well-suited, I don’t think that this movie is really worth more than a 3½. I have to admit that I was so excited when I heard that this movie was being made… but totally disappointed when I actually went to see it. The story-line didn’t even completely line up with the book, in terms of the added action (the whole first scene was way to extreme) and also with how things were changed. Just to list a few examples, in one scene, Alex is in a horse-chase… but wait—in the book it was a vehicle-chase! Also, Sabina Pleasure was not introduced until… Eagle Strike?! I can understand maybe having a different character as Alex’s girlfriend, but using Sabina totally messed things up. Also, Alex went to a private, dress-coded school, not a public school. To me these things are too major just to be overlooked. I can understand if maybe it was a movie based on all of the Alex-Rider books, but for it to be just about Stormbreaker… it was too altered from the text.

Also… considering that this was an action/spy movie based on an action/spy book, I can see why there were intense scenes of action, but I think that most of them were blown way out of proportion, and that the movie made Alex look like some type of super-human kid. Maybe I am over-criticizing, but to me this movie was a waste of time and money. It was also a waste of a guilty-feeling conscience too… If Jesus was here in person, I totally would not have gone to that movie, had I known how bad it was. But Jesus IS here, only in Spirit… and I really don’t think that going to see this movie would glorify Him at all.
My Ratings: Average / 3½

Jenni Thaine, age 14
Positive—“Alex Rider: Operation Stormbreaker” was a nice surprise. It did have one disturbing moment, but other than that was relatively clean. I didn’t hear any cursing, using the Lord’s name in vain, or any language worse that “heck”. There was action/violence, but everything was bloodless and was comfortable in its PG rating. The acting wasn’t superb, but still did the job. I didn’t watch this movie for the acting, I watched it for the fun. And it was fun.
My Ratings: Moral rating: Better than Average / Moviemaking quality: 2½