for strong violence, pervasive language, sexuality, nudity and drug use 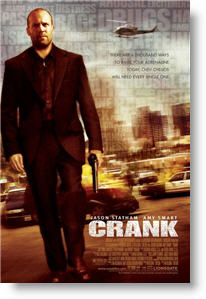 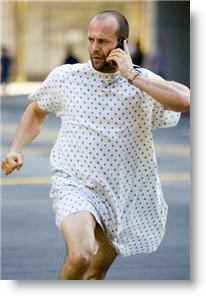 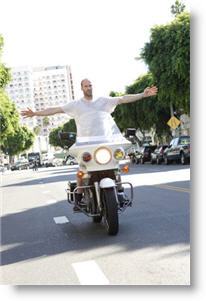 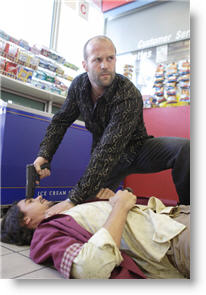 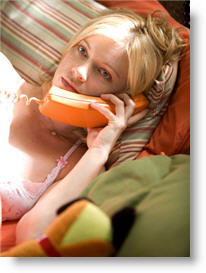 “There are a thousand ways to raise your adrenaline. Today, Chev Chelios will need every single one.”

The main character of this foul-fest is Chev—a hit man who gets what he gives. One morning he wakes up to discover he has been drugged and has only a short time to live. He learns that adrenaline will keep him going for awhile. What follows is a frenetic quest for epinephrine, and anything else that will stimulate him, for as his doctor tells him “if you stop, you die.”

The pace of this movie is dizzying, the music loud and thumping, and the film is so vulgar I cannot imagine anyone being entertained by this raw sewage. Just about every sentence uttered contains foul language—at least 100 f-words, and the Lord’s name profaned many times.

As Chev continues on his quest to wreak revenge on his killer, he uses a meat cleaver to cut off an attacker’s hand, then picks up the severed hand-still-clutching-the-gun and uses the gun to kill the handless man. Another man is suffocated by a plastic bag being tied around his head as he is suspended from the ceiling. There are many grisly murders in this movie, and the audience gets to witness every one of them.

[See article about the effect of movie violence]

The audience also gets to witness Chev and his girlfriend having graphic sex in front of hundreds of cheering witnesses in a market. There is also other nudity in the film.

This movie is really about “how far can we go in a movie… how much sewage will people be willing to pay to have dumped on them?” There is not one likeable character, no one “to pull for.” This film is not about art, creativity or entertainment. It’s filthy and foul, vulgar and void of redeeming qualities, low and lewd—opposite of clean, pure, wholesome, good, and uplifting.

For me, the very best thing about this movie was getting to walk out of the theatre when it was over.

Negative—As a big fan of Jason Statham in “The Transporter” movies, I wanted to see this. It seems this is a new direction for action movies, action with attempted black humor, with other examples as “Kiss, Kiss, Bang, Bang” among others. The public sex scene, while not really showing much of anything graphic, was disgusting, especially with kids supposedly viewing it. To me this was the most offensive part. This movie seems to intentionally be a video game with live characters. It’s a clever concept, but the crassness is just too much. Without the crassness, especially the public sex which I have to mention again is just disgusting, and this could have been a clever movie. As much as I like Jason Statham as an actor, I can’t recommend this movie. This movie seems to be made for fans of violent action video games.
My Ratings: Very Offensive / 5

CoverGirl, age 21
Negative—This movie was absolutely horrible and extremely offensive. I should have listened to my gutt, but instead let my friend and her new bo pick this one. We thought it was just going to be an action-type guy movie. We were horribly wrong. My friend and I kept having to cover our eyes, too bad we couldn’t cover our ears. We ended up walking out of the movie (not soon enough) and getting a refund to go see something else. Whatever you do, do NOT waste your money on this one.
My Ratings: Extremely Offensive / 3

Kelly, age 36
Negative—Well, against the reviewer’s advice, I went and saw “Crank.” I thought to myself, “Surely it can’t be that bad. Movie reviewers usually are overly critical anyway. And besides, I’m not that easy to please and usually find redeeming qualities in most movies I view.” Boy was I wrong. This movie was HORRIBLE! The review hit it smack dab on the head. I think this movie took a part of me that I may never get back. Please don’t make the same mistake I made. Listen to your heart and this review. Your heart and mind will thank you for it.
My Ratings: Extremely Offensive / 3

Clyde, age 35
Negative—I have never walked out of a movie before, until I went to see “Crank” a few nights ago. I knew within the first five minutes that I should not be watching the extreme violence and gore in this film, but it was about an hour later that I walked out—admittedly too much later. Hollywood is out to shock us and push the envelope, but where will it end? What is next? This film is proof of how desensitized we are when it comes to viewing sin as entertainment. Don’t waste your money here.
My Ratings: Extremely Offensive / 3

Angela, age 39
Negative—I am going to make it plain and simple. If you are a confessed Christian, DO NOT SEE THIS MOVIE. We are given the Holy Spirit who dwells in us, so why offend the Spirit by watching this trash. I stopped the movie because of all the language, nudity, violence. Trust me, stay as far away as possible.
My Ratings: Extremely Offensive / 1

Scott, age 33
Positive—Let me start off by saying that, yes, this will be a very offensive movie to many, especially hardcore Christians. There was a graphic sex scene (although little to no nudity) in front of a large crowd, other nudity was shown, lots of violence, lots of drug use and a good deal of profanity featuring about the entire spectrum of curse words. I expected this movie to just be “XxX” all over again (which I hated by the way), but perhaps even harder-core, and in someways it certainly was. However, this movie was far more intelligent and had much more style. The plot, although extremely far-fetched was well executed and this movie was actually very funny. However, the film was very well made and had many very artistic atributes that made it interesting and entertaining to watch. The whole movie is very stylized, and has a very frantic and fast paced feel unlike anything I have ever seen. During this film Chev has the usual Jason Statham suave-tough guy character and plays it perfectly. He is always constantly putting all kinds of things into his body to try to keep his hear beating fast, including countless energy drinks, caffeine pills, drugs of various sorts, etc. which was very humorous to me, especially once you see the execution. Anyways, this is getting long so I will simply say that if you are interested in seeing something different and are not easily offended I would recommend this film. However, this is DEFINITELY not for teens at all. I suppose in short, if you like strange films like “Sin City,” “21 Grams,” “Crash,” “Memento,” you might actually enjoy this strange action movie.
My Ratings: Extremely Offensive / 4

Brett Lacher, age 20
Negative—This movie is extremely offensive (if there is another rating worse than extremely offensive this movie qualifies it) in many ways. Viewers and critics might portray it as a revolutionary bold approach, especially with the public sex scene, which is totally indignant and humiliating, and the (anti) hero’s deeds—for example, pushing the Asian cab driver to the street and shouting “al-Quaeda” and getting his cab while the driver gets lynched. Offending scenes are numerous to count—mutilation, various sexual acts, nudity, drug use, extreme violence and an array of obscenities. This movie is not only offensive but a challenge to Christian values not only (as a reviewer mentioned) “hard core” Christians but anyone [who] values Scriptures and morality will definitely get offended.
My Ratings: Extremely Offensive / 2

Cyril Thomas, age 28 (Scotland)
Comments from young people
Negative—As the reviewer correctly said, this movie is nothing but cinematic trash and garbage, a morally bankrupt and sickeningly repugnant film. Hardly enjoyable, and ludicrously sinful and over the top, “Crank” was not only a disappointment, but a disgrace.
My Ratings: Very Offensive / 3