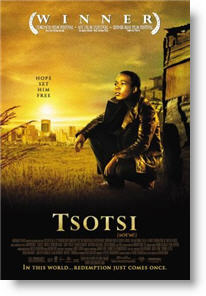 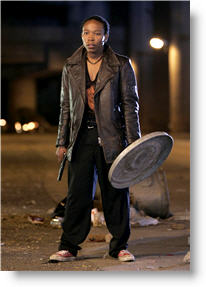 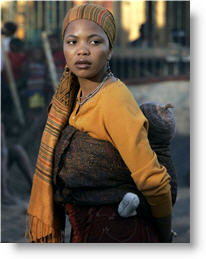 Is Jesus Christ the answer to your questions?

“In this world… redemption just comes once. …Hope set him free”

With an Academy Award nomination for Best Foreign Film, “Tsotsi” is a tough but touching tale of one man’s transformation from a hardened criminal to a caring individual. “Tsotsi” is the name of the main character, but as he changes throughout the course of this story, his true name, as well as his past, is revealed to us. Reason and understanding for why this man leads such a harmful lifestyle comes to light and eventually leads us to a beautiful, yet somewhat ambiguous ending.

Beginning in a township outside of Johannesburg, South Africa, Tsotsi (Presley Chweneyagae) leads a small band of his criminal friends who are willing to kill in order to steal money. After a confrontation with one of his criminal friends, Tsotsi decides to go out alone to “do a job” (i.e., commit a crime) and winds up carjacking a rich woman. Things drastically change for Tsotsi when he drives away in the stolen car and discovers a baby in the back seat. Tsotsi’s dilemma presents him with choices and decisions he could have never imagined making, and leads him to confront not only what is right, but also buried hurts and pains from his past.

This film is rated “R” and includes various violent scenes as well as foul language. The violent scene in the beginning is a bit gratuitous, showing a man on a subway being stabbed. Some other moments include shootings at point blank range, one of which involves blood. One disturbing incident is the depiction of a dog being wounded and suffering until he dies. The film is subtitled with the actors speaking Zulu, Xhosa, and Afrikaans, but the clarity of the English version of the f-word is something that comes across very clearly.

Due to some of the content of this film, this movie may not be for everyone. The incidents that are depicted describe scenarios that unfortunately do happen in parts of South Africa. Carjackings and murder are a very real part of life in this country. Perhaps part of the reason the film was made was to help shed some light on the problems there. But there are many other parts of the film that show not only the unraveling of someone who is so vicious, but also some very tender moments as well. In this film, the bad things are not shown without also showing the good.

One biblical concept that is revealed here is the idea of repentance. Tsotsi is a desperate criminal with no known hope for his future, but this one unforeseen predicament is the impetus for him to begin to rethink his way of life and begin to change his ways. The story does not show us that everything ends perfectly, but it certainly touches us in such a way as to show that people (even hardened criminals) are able to change. This story certainly shows how a person can go from choosing death to choosing life.

This is not the first film dealing with issues in South Africa by director Gavin Hood. While most of the cast is black Africans, Gavin Hood is a white man who could very well be South African himself. The film is quite entertaining, too, with some modern South African music, as well as some very picturesque cinematography.

Positive—I went to see this film recently following a recommendation from a friend. It was an opportunity I did not regret. Yes, it’s heavily laced with violence and vulgar language, but it all serves a purpose to add to the story as it unfolds. This was a truly touching depiction of what can happen to someone when sufficient nature (social/emotional) is absent during childhood. It was good that they also showed that poverty is not the only reason for deprevation; this was shown in the character of the young lady who helps Tsosti look after the child. She, despite her living conditions, was shown to be a hard working compassionate human being.

If you want a fresh insight into one of the problems facing “aparthied” free South Africa. This is a must see.
My Ratings: Very Offensive / 4

Christiannah, age 23
Positive—I feel really blown away by the richness of content and meaning of this film. Both a sharply realistic depiction of life in poverty-stricken black South Africa and a morality play about a lost soul’s coming to repentance, it opens your eyes to the tragic life facing so many in South Africa today, the devastating effect of abuse on a child’s heart and his ability to think humanely and realistically and to the possibility of a change of heart even in the most hideous killer. I am just amazed by the story line, the script, the direction. A remarkable movie. I am very pleased that I was able to see it.
My Ratings: Offensive / 5