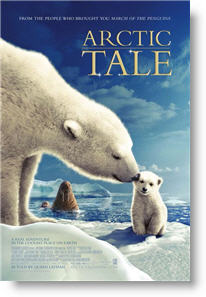 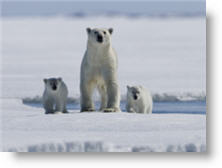 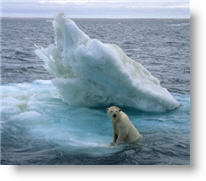 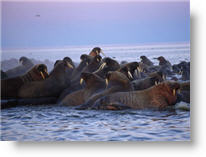 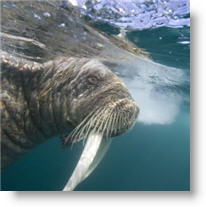 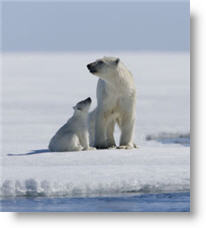 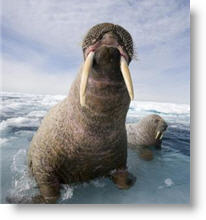 Should Christians be concerned about the environment? Answer

Bears in the Bible

“Arctic Tale” opens as two baby polar bears emerge from their snow den and a baby walrus is born. This movie has wonderful footage and is not as slow moving as its predecessor “March of the Penguins”. The audience watches as Queen Latifah narrates 8 years of life of Nanu (the polar bear baby) and Seela (the baby walrus).

We follow the lives of these two babies until they then have offspring of their own. It is a cute and wonderful story that leaves you in awe of the surroundings. I became drawn into their story of survival and struggles while their icy homeland is melting away. These animals are forced to endure hardships their ancestors were not. These hardships are due to pollution and man harming the environment.

I learned facts about both polar bears and walruses that I did not know and most of them were very interesting. Did you know that adult polar bears can smell through 3 feet of snow? However, other facts are vague and are presented in a way that makes you wonder if it is a ploy to play on your emotions—such as “a female walrus doesn’t give birth very often”. How often I wondered? We are also shown Nanu being forced to leave her mom early. How long do polar bears stay with their mom’s and how do they really separate?

On the surface there is little here to be concerned about in the way of negative content. There are the occasional comments about the animals that give them human qualities and imply sexual overtones. Seela is older and ready to mate and we hear “Seela’s tusks have filled out nicely and the boys have noticed. She knows what they’re after… She has standards, unlike some other females. She is holding out for something special”. This “documentary” shows other things like a polar bear’s death from starvation. It is done in a tasteful way. They also show animals fighting or starting to fight and afterward eating their prey. None of the killing was graphic and should not scare children. In one scene, after the walruses have eaten and are resting on the rocks, they show footage of them burping and farting. It is clearly a scene to amuse children with bathroom humor Hollywood-style and it reminded me of the scene with Eddie Murphy in the “The Nutty Professor”.

The film ends with children telling us how to conserve energy and some of the advice are things you mother told you when you were young—turn out the lights every time you leave the room. Your mother’s reason for telling you to turn out the lights was not the same as the one in this film.

However, be forewarned. This is not the documentary that it appears to be. At times, it is evident that this movie splices together footage of different animals. Their footage is all wonderful, but an article in the July 22, 2007, edition of the Los Angeles Times states, “They took a decade of footage of walruses and polar bears and created two composite characters, Nanu the polar bear and Seela the walrus.”

Upon reading this, I felt cheated. I then searched for more information and after reading another interview with the husband and wife who filmed for 15 years (Sarah Robertson and Adam Ravetch), I learned that I had been duped. Clearly they had some agenda in presenting this to us. It is by their own admission a “nature fiction”.

This film clearly gives animals human thoughts and feelings. Although, many times we would like to think animals are acting with the same thoughts we are, most of the animal’s actions are instinct. Seela doesn’t hold out for a special man and male walruses mate with more than one female.

The Bible gave Adam instructions for the care of the Earth and the animals, and we are supposed to follow in his footsteps. Adam was told to be fruitful and multiply and fill the Earth and subdue it and have dominion over every living creature. We are to care for the Earth and God’s creatures, but we need to find a balance. We cannot just actively destroy everything for our own advancement, but we also have to understand that there are cycles to things. I remember being in grade school and being shown pictures of the projected glaciers that were going to return. I live in Northeast Ohio, and I was scared as a young child because I was told that the glaciers would come down through Ohio and everything would be wiped out. This was all due to the chlorofluorocarbons used in refrigeration, air conditioners, and Styrofoam. Now we are being told the Earth is warming and we need to do things to stop it. Whether it is warming or not, many scientists believe that there is a natural cycle to the warming and cooling, and ultimately God is in control.

While I think most children over the age of 4 or 5 will like this film, it is too slow for children younger than that. My 3 year old got bored and wanted to talk and walk around; he usually sits through most films. My older children knew that these were composite animals even though the film didn’t tell them. I would use this film as an opportunity to talk about how everything is not as it appears. After viewing the film, research these animals and some of the distorted facts with your children. Talk to them about agendas that people have and how filmmakers use movies and television to try to sway public opinion regarding the environment, homosexuality, which president to vote for, etc. Teach your children not to accept someone’s version of something but to research for themselves. And then teach them the real reason you want them to turn off lights when they leave the room—you can save enough money to go see another movie together.

Positive—“Arctic Tale” is not a spiritual film. Rather it presents the dangers of global warming in a light educational / eye opening manner. Stories about arctic babies. their growth, survival and impending danger brought about by global warming. The ending of the movie presents options on how to help resolve this problem. and these are presented by kids. If kids at this time and age will get the message, then when they become adults they might be better caretakers of nature than the current adult population. Biblically-speaking, the movie has several “values-related scenes,” but I don’t remember anything directly Christian-based.
My Ratings: Good / 4½

Katherine Rivette, age 48
Negative—I found this movie to be very degrading to the males of the species it featured. There are no male animals that are portrayed in a positive light, they are the brother without a name, the “scary uncle,” the bloodthirsty rogue, and the absent father. The female animals, on the other hand, are portrayed as brave, intelligent and even selfless to the point of martyrdom.
My Ratings: Offensive / 4

Peggy, age 48
Positive—My Family absolutely loved it.
We rented it and I watched it one time and really liked it a lot
but my kids watched it several times… !
Awesome movie.
A must see!
My Ratings: Moral rating: Excellent! / Moviemaking quality: 5

Melissa Poole, age 34
p class="comment">Positive—I watched this movie with the girl I was babysitting and found it interesting, well made, and yet realistic. I’d have to disagree with the above comment about males being portrayed negatively. Although they were portrayed as aggressive and defensive, I’m quite certain that they were portraying them accurately. And nature isn’t nice and pretty all the time. As for the male cub having no name, that, I believe, was simply so that when it died of cold it wasn’t as harsh for the children watching it.

Christians sometimes get passive aggressive on their care for the Earth. We’re supposed to be good stewardesses of what God has placed under our care. I think its a good thing for us to be reminded of our effects on the environment. Maybe we should be doing more than we are to help preserve what God has entrusted to us. Definitely food for thought.
My Ratings: Moral rating: Excellent! / Moviemaking quality: 4