for mild language and some rude humor 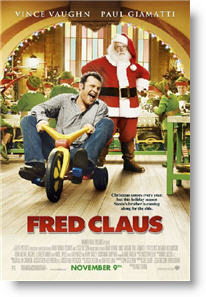 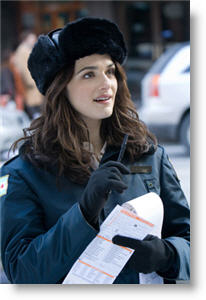 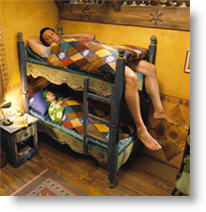 “Everybody has that one relative who can’t help but cause problems over the holidays. Even Santa.”

When Nick Claus is born, his older brother Fred appears to love having a brother. As the two grow up, it becomes apparent that Fred is living in his saintly brother’s shadow. The final straw for Fred is when Nick chops down Fred’s favorite tree to use for Christmas. Fred’s animosity is fueled by his mother’s (played by Kathy Bates) constant comments about how perfect Nick is.

Nick (Paul Giamatti) grows up to be Santa Claus and lives at the North Pole. Fred (Vince Vaughn) is living in Chicago, has an on-again, off-again relationship with Wanda (Rachel Weisz), and is a repo-man always waiting to make his big business break. After not seeing his brother for years, Fred is arrested, and he finally calls on Nick to bail him out. Nick agrees, but with one condition. Fred must come to the North Pole and work for his brother. Meanwhile, Clyde (Kevin Spacey), an efficiency expert, has warned Santa that he is 3 strikes away from being shut down. Predictably, with Fred working at the North Pole, those three strikes pit the 2 brothers against each other.

OBJECTIONABLE MATERIAL: There is plenty of objectionable content in this movie. The movie begins with a Kathy Bates in labor giving birth to Nick. There are several times a-s-s is used, plenty of sexual innuendos, and constant fighting between Fred and elves, Fred and Santa, Fred and his girlfriend, and… the list is endless.

Fred makes a comment about a girl’s swim team, and he hopes that they are naughty. When Nick is born, his mother says “good lord.” There is a comment about an elf who has attached himself to Fred’s leg—“acting like an untrained dog”. The song “Beast of Burden” is played—“all I want is for you to make love to me.” Fred makes plenty of sexual references—getting the “sleigh off the ground,” etc.

“Hell” is used. Fred calls Nick fat boy several times. There are various other crude comments made, and comments that you don’t want your children repeating.

VIOLENCE: While there are plenty of movies that show worse violence, I sat in this movie and cringed. I certainly don’t want my 2 little boys believing that it is okay to ever repeat any of the scenes in this movie. A little girl kicks Fred. There is a chase involving Fred and Salvation Army Santas with it ending with all the Santa’s piled on top of Fred. Fred is jumped by Santa’s guards (elves in black). Fred gets in a physical fight with D.J. (the disc jockey elf). D.J. punches Fred, and Fred picks up D.J. and puts him in a cabinet. Fred tosses an elf and then jumps onto a group of elves. Fred and Santa fight. Santa kicks Fred. Fred and Nick have a snowball fight which turns physical. I could continue listing other instances, but I would take a full page to list them all.

There is no nudity, but Charlene (Santa’s assistant) wears low-cut tops and short skirts throughout the movie. In one scene, Fred and Willie, Santa’s head elf played by John Michael Higgins, are standing at urinals talking while they go.

There are other various scenes that may bother you, which include, but are not limited to: Clyde shredding letters to Santa from boys and girls, a boy steals Santa’s wallet, Santa gets fired, Fred says he is moving in with his girlfriend, Charlene and Willie kiss, and Wanda and Fred kiss. Fred sets up a kettle and rings a bell for his charity People Helping People. There are sumo wrestlers fighting in a background scene.

However, there are also some nicer scenes. Fred does realize that he has messed up and tries to right his wrongs, and he also forgives Nick. Fred makes the statement that there are no bad children, just children that are hurt, and confused. This causes Santa to rethink how he treats people. We know that Christmas is a time of celebration and hope, but ultimately it is a time of forgiveness. Without Jesus birth, we would not have had His death and resurrection to ultimately pay for our sins. Without that payment for our sins, we could not be forgiven.

Did my 5 year old laugh at this movie? Yes. Would he want to see it again? Yes. Did it have some redeeming qualities? Yes. Would I recommend this movie? NO. It is over the top and cheesy, but the continued kicking, punching, fighting and verbal insults were more than I would want to witness again. This is one Christmas movie we won’t repeat.

Negative
Negative—Dumb movie. Not very funny. Probably not good for little kids to see Santa getting beaten up.
My Ratings: Offensive / 1½

David, age 37
Negative—From a Christian standpoint, I am not sure as to how one would recommend others to take their children to see this. If one minds their children listening to profanity or sexual content, then this movie is not for you. It is a sad day when a simple Christmas movie geared towards children has this type of language in it. It is definitely not for children, regardless of what the trailer promotes.
My Ratings: Very Offensive / 3½

Ginny, age 50
Negative—I took three teens to this movie and was quite disappointed. The main character was pushing his girlfriend to move in with him and there were sexual references throughout. The pros: the brothers were reunited, and the main nemesis in the movie was “changed for the better.” I know I read some reviews saying that they thought the playing of “Silent Night” was beautiful, but I found it sacrilegious… Santa, elves and brothers are all looking through a crystal ball seeing all their good deeds they had accomplished while this song is playing. I think the author of this beautiful song would turn over in his grave.
My Ratings: Offensive / 1½

Kristin, age 35
Positive
Positive—Here we have a movie about Santa Claus that is targeted for adults. I would not recommend bringing children to see this, as it is not a children’s movie. Don’t be fooled by it being about Santa. The main review is accurate and complete. There are scenes of brothers fighting with each other (as often happens in families and is sometimes expected). When siblings fight, they generally walk away from the fight as better people having learned something about each other. This film had many redeeming qualities, and all the characters were changed in the end. People who saw last year’s “Superman Returns” will be treated to Kevin Spacey (Clyde) making a reference to his role as Lex Luthor in that film. And finally, the end of the movie brought me to tears with (as a previous reviewer also commented) the MOST BEAUTIFUL rendition of “Silent Night” I have ever heard!
My Ratings: Average / 4½

Pete, age 29
Positive—I just viewed this film with two of my good friends; all three of us enjoyed this wonderful film… a very good film for all ages… very cute, clean movie. I thought a lot of parts were very, very funny; I recommend taking your children to see this. There were a few cuss words, but beside that it was a very cute film…
My Ratings: Excellent! / 5

Tara, age 24
Positive—…It did have a few “bad” words and some suggestive comments, which should never be disregarded and should always be explained to younger viewers as wrong. That being said, if you’re looking for a fun holiday movie with the least amount of “junk” in it, and that will have parents and kids laughing throughout, with an overall message that can be used to bring up and talk about how to deal with family relationships. This is the movie to see. I laughed, then went home and told my parents to take my youngest brother as a family movie (my dad is a pastor and very careful what he supports as far as movies by going to see them in theaters). I feel we as Christians should always ask if by going into a movie or anything for that matter, if this will bring glory to Christ or not, I think this would be a good film to treat your youth group to (as I did) then talk about how their relationships are in their families. If you want to laugh out loud with the least amount of looking around to see if it was okay to do so, then go see “Fred Claus.”
My Ratings: Better than Average / 4

Ricky, age 27
Positive—In some ways the main review at this web site is accurate, but I think the movie grows (as does the main character) into one of high moral values, and it does not leave out Jesus. The audience is treated to a most beautiful rendition of “Silent Night,” and thus a reminder of what the season is really about. The lessons learned in the movie are important ones, and I think children (and adults) who see this film will understand the message.
My Ratings: Good / 5

Christean, age 67
Positive—The best holiday film that I have seen so far this year! Vince Vaughn and Paul Giamatti are great, and have a hilarious chemistry onscreen. Kids may not get into this one. It’s more for adults, and not in a bad way. It’s just that the story itself may not be appealing to most children. Plus, the humor would fly right over their heads. However, as it stands, it was great. It was no “Citizen Kane,” but as far as holiday films go, this is now one of my favorites!
My Ratings: Excellent! / 3½

Adam Renkovish, age 25
Neutral
Neutral—This was a cute movie for the whole family. I went to see it with my boyfriend, and, throughout the whole movie, you could hear little kids laughing throughout the entire theater. I only remember 1 swear word, the “violence” was not anything heavy—just snowball fights and stuff that kids do. They didn’t mention anything about the real reason for Christmas, but it was still a cute movie for kids.
My Ratings: Better than Average / 4

Casey, age 19
Neutral—Just one quick comment that wasn’t picked up on. Early in the film before Fred goes through his changing experiences, his girlfriend wants to know why he hasn’t moved in with her, and he makes excuses. Afterwards, when he becomes a new man, he surprises her by moving in with her—marriage is never mentioned. There are also scenes to insinuate that time is going by and they are together, but still no mention of marriage. Just be aware if you have small children that the “hero” of the movie is subtly telling your kids that moving in together (but not marriage) is the way to go.
My Ratings: Offensive / 3