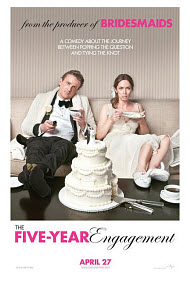 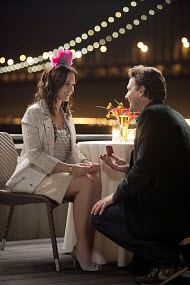 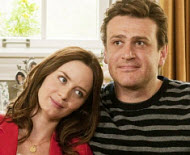 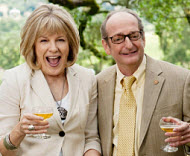 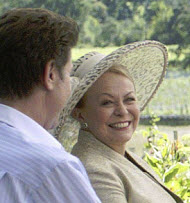 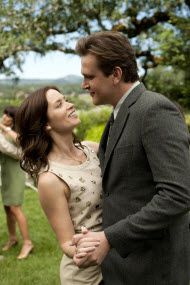 “A comedy about the journey between popping the question and tying the knot.”

Violet (Emily Blunt) and Tom (Jason Segel) are young and in love and cannot wait to get married. Violet is a successful graduate student working on her doctorate in psychology, and Tom is a talented sous chef on his way to becoming an executive chef in San Francisco. Their wedding plans are put on hold, when Violet gets accepted to the University of Michigan. Tom gives Violet his wholehearted support, and gives up his job as a chef to move to Michigan with Violet. After moving to Michigan, Tom and Violet quickly learn that the journey down the aisle can be full of unexpected bumps and is about far more than planning a wedding ceremony, but about planning a life together.

Curse words litter the movie’s dialog. There are more than 35 uses of the f-word, in all its forms. The s-word is used more than a dozen times. The Lord’s name is taken in vain 20 or so times and is paired several times with the word, d—-n. Other obscenities include uses of words such as, h--l, d--n, b---h, a--, etc. … There is a lot of very frank sexual talk and content throughout the movie. There are too many offensive moments to mention them all. For example, the male anatomy is talked about in numerous scenes. One of the lewd jokes regarding the male anatomy involves Alex using a carrot to make a crass joke. There are a number of crude jokes about the female anatomy, too. One of the grad students in Violet’s class is obsessed with the study of masturbation, and this becomes a sort of running joke about his character. Violet’s sister, Suzie (Alison Brie) hooks up with Tom’s friend, Alex (Chris Pratt), and she becomes pregnant. On a positive note, Suzie and Alex get married and choose to keep the baby.

There are a number of bedroom scenes, several of those include Tom and his young sex-obsessed girlfriend, Audrey. There isn’t any nudity in the bedroom scenes, but they are still acted out in a rather graphic manner. Violet’s professor kisses her in one scene after having too much to drink, and Violet immediately regrets what happened between them. Tom almost sleeps with a coworker at his restaurant in a moment of despair over his troubled engagement. He and his coworker are both drunk and sneak into the restaurant after hours. Tom and Violet’s friends give inappropriate toasts at their engagement party, one of those toasts involves a lewd joke about fantasizing about sleeping with the Disney princesses.

A warning for brief partial nudity should have been included in the film’s rating. Tom’s bare behind is shown twice in the movie. In one scene, Tom wears only a shirt and apron, and when he turns around we see his nude behind. Also, Tom’s apron has a picture of Michelangelo’s nude statue of David on it. In the other scene, Tom is running through a snowy woods at night, and once again his unclothed behind is seen.

“The Five Year Engagement” has a few positive elements amid the heavy sexual content. Violet and Tom are sincerely excited about getting married and go into their engagement with very positive attitudes. They can’t wait to get married, and they dream about having 25 kids and growing old together. Tom has a very giving and supportive attitude towards Violet. He gives up the career he loves to move to Michigan. Tom’s willingness to put Violet’s need above his own is one of the most positive aspects of the movie.

Tom begins to struggle with the sacrifices that he is making for Violet, and he becomes unhappy with his job at a Michigan sandwich shop. Tom does his best not to let resentment settle in and to be a good sport about Violet’s grad studies in Michigan, but he begins to feel that he is doing all of the giving in the relationship. Tom suffers a bit of an identity crisis after giving up his career. This part of the storyline highlights one of the things that can make relationships and marriage so difficult. It shows us how important it is to be able to put your spouse’s needs above your own. It emphasizes that getting married is about so much more than planning a wedding, but about building a life together.

“The Five Year Engagement” has a moral to its story, albeit a moral buried in a raunchy movie. Tom and Violet learn about the give and take of marriage and compromise. They get too caught up in wanting everything to be perfect, but they learn that there is no such thing as a perfect marriage. You have to accept the other person’s flaws and work through the hardships as they come. Tom’s mother tells him that his father isn’t a perfect match, but he is “the love of her life.” The film’s moral alludes to the idea of faith and trust, and may remind us, as Christians, that we must trust God with every aspect of our lives, including marriage, and that He has a wonderful plan for each of our lives.

“For I know the plans I have for you,” declares the Lord, “plans to prosper you and not to harm you, plans to give you hope and a future” —Jeremiah 29:11.

“The Five Year Engagement” could have been a fun romantic comedy, had the filmmaker’s approach to storytelling been a lot more chaste and hadn’t relied so heavily on crude sexual jokes. There are a handful of genuinely funny moments in the movie, not marred by inappropriate content, and it is no surprise that the film’s funniest moments are the clean jokes. The story’s central conflict (whether or not Violet and Tom will get married) would have been far more compelling, if they had not already been living and sleeping together. Because these two characters are already living together like a married couple, the film’s main conflict is simply reduced to whether or not Violet and Tom will have a wedding ceremony, not whether or not they will spend the rest of their lives together. A more conservative approach to the film’s storyline, where Tom and Violet are not cohabitating, would have created better dramatic tension and would have made for a cleaner and far more romantic story.

“The Five Year Engagement’s” secular view of marriage and relationships only weakens a plot that is overrun with crude sexual humor, and therefore I cannot recommend this movie to any audiences.

Negative
Negative—Jason Segel who known for his offensive movies makes a dip into the children’s movies, with “The Muppets,” in what was seemingly an attempt to attract the new generation toward his worldly views. (2 Peter 2:22—A dog returns to its vomit.) This is a similar approach to Anne Hathaway who made “family” movies and then draws her crowd of followers into the filth she has made since then. (See my comments for her movie “Love and Other Drugs”). This is very common, as with Jack Black… the list goes on and on. I don’t really consider myself to be a conspiracy theorist, but there seems to be a common thread. Maybe their intentions are “good” or at least just motivated by greed, but it looks to me like there is a greater drive here to draw people away from Christ and towards the world. I am not absolutely sure that the actors are willingly participating in this greater cause, but I tend to think so. Ultimately, it is a spiritual war, and we, as Christians, need to go and share the gospel.

Also, please pray for these actors, as I know we would love to see them repent and trust in Christ. Any actors (or anyone) if by some slim chance you read this, please read the Bible and search for the truth. If you have rejected Christ because of your sin, or someone in your family’s sin, or how you were treated because these sins, just know, Christ is ready to forgive, all you have to do is stop embracing your sin. Repent and trust in the savior Christ Jesus. I would recommend reading the book of Romans, particularly 5 and 6 which I think is a good summary of the gospel message. We are all fallen and in need of a savior but when we are called and answer the call we can not continue to willingly cling onto and embrace our sinful life, but don’t take my word for it search the word of God—The Bible.
My Ratings: Moral rating: none / Moviemaking quality:

Adam, age 40 (USA)
Negative—If it weren’t for the constant “F” bombs from every actor, constant sex scenes and alcohol in practically every scene, in every actor’s hand… it could have been a cute movie. Most Christians will find this highly offensive, so don’t waste your money. If I hadn’t just had food poisoning, I probably would have been in my right mind to turn it off! It’s sad, though, because it did have some funny parts, and the end was cute. Don’t know why Hollywood has to constantly ruin movies that could teach things to people and could have just been good entertainment without trying to corrupt us. Oh wait, that IS what they are trying to do!
My Ratings: Moral rating: Extremely Offensive / Moviemaking quality: 3