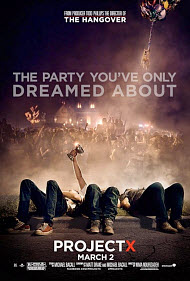 vandalism and other illegal destruction of property

Here’s what the distributor says about their film: “‘Project X’ follows three seemingly anonymous high school seniors as they attempt to finally make a name for themselves. Their idea is innocent enough: let's throw a party that no one will forget… but nothing could prepare them for this party. Word spreads quickly as dreams are ruined, records are blemished and legends are born. ‘Project X’ is a warning to parents and police everywhere.”

Ted Baehr, Movieguide
“…it’s the cinematic equivalent of someone chucking a brick through your window, affixed to a dog turd in a box. … Criminally witless—it’s a movie whose idea of humour is shoving a midget in an oven; then having said midget punch people in the testicles…”

Chris Hewitt, Empire UK
“…Perhaps director Nima Nourizadeh set out to create a movie with less technical merit or cultural value than ‘Girls Gone Wild.’ If so, ‘Project X’ deserves the Oscar for Best Puking on a Minivan. …” [1/4]

Gary Thompson, Philadelphia Daily News
“…Somehow you’d think it would be a little more fun than it is. But the filmmakers are better with the big picture than they are with the little details, such as characters and quotable out-of-nowhere dialogue that can make a raunchy teen comedy really work…”

Matt Soergel, The Florida Times-Union
“…‘Project X’ fails in every endeavor… It's billed as a comedy, but there's not a laugh to be had during the frenetic mayhem. There is also no plot beyond debauchery, nor characters beyond cardboard cutouts. Basically, it's a setting, and a familiar one: a suburban home teeming with drunken, druggie, hedonistic, irresponsible high-schoolers. …”

Claudia Puig, USA Today
“…director Nima Nourizadeh pretty much ticks every box marked crude and predictable: sprays of vomit, girls snogging, someone giving the dog a blowback, dad’s Merc in the pool… Imagine it, and it’s in there. …” [1/5]

Cath Clarke, Time Out London
“…There's a lot to try to forget about a movie like this—images I'd like to scrub from my mind. …”