Alone Yet Not Alone 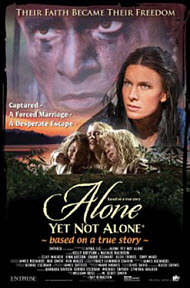 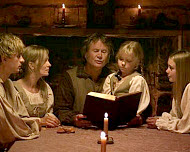 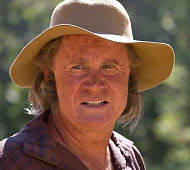 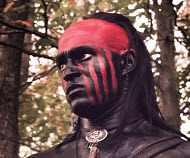 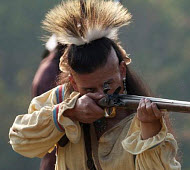 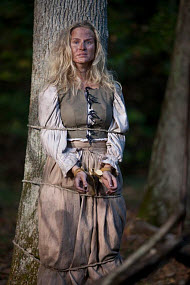 “based on a true story”

“Alone Yet Not Alone” is another breakthrough film from the Christian film industry. It takes us on a journey through a true story which occurred in the 1700’s, during the French and Indian war; As Indians, deprived of their own territories, are driven by the French agenda for American land, they and the English clash in war. The settlers are caught between and hundreds of children are kidnapped as families are separated and slaughtered, their scalps traded to the French as merchandise. We follow this story closely beside two growing young ladies as they face a fate far from their childhood expectations.

The first thing my sons expressed after seeing the film was their appreciation for the camera work. That doesn’t come easily in this family. The young actors also outdid themselves. The scenes and the period garments and objects were authentic and beautiful. The story is an engaging and sobering telling of this era in American history. It builds faith and shatters fantasy of the easy life. A portrayal of martyrdom in this film had me upset—the character didn’t die quickly. Shortly thereafter I was reminded by a quiet voice that the hero portion of martyrdom, the stage as it were, is but a short proverbial tip of the iceberg which a true hero might experience. The rest is endurance and everlasting trust and patience—hours as ugly as the devil’s jowl.

I have come to enjoy films lately more on my big screen at home than the big silver version. This is no exception. I can’t wait to get it on Blu-ray. It is something my family will watch multiple times and study for its artistic content.

There is no sensuality or sexuality, no foul language or blasphemy in this film.

Violence: If we measure violence by the amount of detail shown by the camera in a given violent act, saying for instance that 30% is implied violence, 50% is to cut the shot away ‘entirely’ before blood or gore appears, 75% is to show some gore but to cut away from the shot quickly and 90% is to show a great deal and even hold for some time on the gore—then this film would be considered very clean—in the 40-60% range with nearly every violent act. There are a few shots with blood, they are from a bullet wound and some blood may appear on axes, but in those cases, they are dark, at least they were on the big screen. If you are concerned about violence for little ones, take heed here. Again, it’s not gory, but there is quite a bit of it. This is the violence which is inherent to kidnappings, attempted rescues and even torture. There is also no fixating on death, though there is much of it.

I am very happy to see this film hit the market. It will no doubt minister and not simply entertain. There are no naps. It’s action packed and exciting. It challenges the simple and exposes evil. The makers of this film are getting at some things film was downright made for. I commend it highly.

Positive
Positive—We at Living Waters encourage you to support this movie, not only by attending, but by posting on social media and telling everyone you know that “Alone Yet Not Alone” will remind you of God’s faithfulness.

Ray Comfort (a ChristianAnswers team member) (USA)
Positive—An excellent film with top quality acting, cinematography, story, and message. Not only does it portray young people courageously keeping to and declaring their faith in God and Jesus Christ, but also holding onto His promises while facing traumatic events and death. Many scenes depict the children and teens taking risks and making sacrifices to help one another, encouraging one another with Scriptures and worship songs, while holding dearly to the faith and Biblical teachings of their loving fathers and mothers.

It accurately depicts the history of Christian settlers fleeing religious persecution in Europe, and the struggles and losses on both sides of America’s inhabitants during the conflicts of the time. The original peaceful coexistence and cooperation between settlers and the Native Americans becoming a clash of cultures as different people groups in America were caught between the English and French (long bitter enemies), and their wars that extended from Europe and continued into America. It portrays the Native Americans as a people concerned over the increasing threats to their existence, and their sense of honor and respect.

The two sons of the Delaware Indian chief reflect the struggles and hearts of Cain and Abel. The movie gets across the message of the importance of teaching God’s Word, especially to your children, and Jesus” message that no matter what trials, testing, and persecution we may be facing, even if alone, yet we are not alone. Jesus will never leave us nor forsake us. God is the Light that leads us Home.
My Ratings: Moral rating: Excellent! / Moviemaking quality: 4½

Tori, age 40+ (USA)
Positive—In addition to AMAZING moviemaking quality, this is one of the most beautiful movies I’ve ever seen. The tagline says it all—their faith became their freedom. In a situation where many would have committed suicide, these girls never let go. They seriously believed they would escape one day! And they continued to stay close to God, instead of worrying about the future. Those things both put a lot of us to shame.

Definitely don’t try to push the PG-13 limits for your family. The violence pretty heavy, but not gory. But young teenagers could still handle it. This is a must see for teens on up.
My Ratings: Moral rating: Excellent! / Moviemaking quality: 4½