for language including some sexual references. 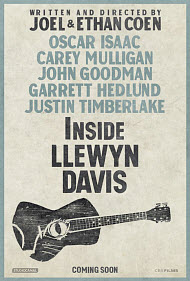 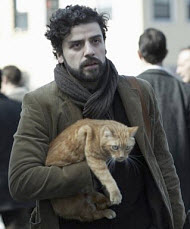 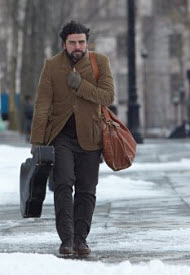 a fictional take on the early 1960s folk music scene

Though they already had five films under their belt (most notably “Raising Arizona” or their debut film “Blood Simple”), Joel and Ethan Cohen became prominent filmmakers with their 1996 Oscar® winning film “Fargo”. They have subsequently made nine other features including the cult classic “The Big Lebowski” and “No Country for Old Men” which also won the Academy’s top honor.

“Inside Llewyn Davis” is the Cohen Brothers’ latest cinematic offering, and to put it simply, fans off the Cohen Brothers quirky, idiosyncratic story-telling and dry, often dark sense of humor will find delight in this film. Those who do not like their work, or are not familiar enough, will probably not enjoy this musical folk-tale.

“Inside Llewyn Davis” follows the life of Llewyn Davis, a fictional, young folk singer in Greenwich Village in the early sixties, just before the folk music explosion. He is a struggling musician who obviously has a lot of talent, but struggles against day to day obstacles, most of which he creates through bad luck and worse decisions.

“…Davis” is basically a road picture, following its titular character from one town to the next and one couch to another (wherever he can convince someone to let him sleep for a night or two) as he tracks down a lead to land new management or potentially a more lucrative record contract. For most of the movie, his traveling companion is a cat he inherits against his best interest.

Oscar Issac (“Drive,” “Sucker Punch”) plays Llewyn Davis, and is very sympathetic in the title role, even though at times it is hard to root for Llewyn who can never seem to get out of his own way. The cast also includes Carey Mulligan, Justin Timberlake and John Goodman.

Audience members may find some content offensive. The most prevailing issue is the abundance of foul language in this film. There are numerous utterances of the “f” word, particularly by Llewyn. At one point he is reminded by his sister to watch his language while around his young nephew and goes on to utter a couple more profanities.

Though there isn’t any outright violence in the film, there is a brief bar fight and those that are sensitive to animal cruelty should be warned that there is a scene involving a cat which may be upsetting.

Overall, “…Davis” is a fun film that will definitely be a hit among Cohen Brothers fans. General audiences will probably have a difficult time latching on to “Llewyn Davis,” and it should be noted that the Cohen Brothers have a very unique, often obscure sense of story-telling. After all, they’re the filmmakers that won an Oscar® for a very unpleasant way of disposing of Steve Buscemi in a wood chipper. Unless you’re a fan, “Inside Llewyn Davis” may not be your particular style.

ABORTION—Have questions about life before birth, or a woman’s choice about pregnancy and abortion? Visit this beautiful online presentation. Ask questions; get reliable answers.

Positive
Positive—Llewyn Davis, the fictional character of the Coen brothers” new film, has tremendous potential. His songs are full of poignant, haunting beauty. However, Llewyn has one big obstacle and that obstacle is Llewyn himself. In a sense, he is the perfect artist—a kind of singing Caravaggio—art comes first and humanity comes in a very distant second.

Oscar Isaac’s performance is as pitch perfect as his singing voice. He never drifts out of character; he never adds a gratuitous sentimental touch that would make us ‘feel his pain.” Audience and performer alike are on their own here. The Coen brothers, like their hero Llewyn, dont’t let anyone off easy. They make you look at things you would rather not see. You could say the film is a downer—this is not as much a struggle to get to the top, as it is a determination to hold fast to an ethic that can only hold one back—if there weren’t so many delightful moments.

The satiric song, ‘Please Mr. Kennedy‘ is alone worth the price of admission. So is the understated, but right on, set decor that beautifully recreates the pre-Beatles, pre-Bob Dylan world of Greenwich Village in the early 1960s.

Objectionable content includes birth control practice and abortion that could not have been as common or obtainable in the early 1960s as the movie implies—unfortunately it looks anachronistic—and very cold—in those scenes.
My Ratings: Moral rating: Offensive / Moviemaking quality: 3½

Jim O'Neill, age 60 (USA)
Positive—This is a film about the possibility of redemption in a world of impoverishment of the spirit. It has no easy answers and certainly not traditional Christian answers. Davis has some musical talent, but not enough to succeed in a under-rewarding profession full of similar people. He can also be something of an arrogant jerk, constantly moving from couch to couch and alienating the people he moves among, and this is constantly coming back to bite him as he lives on the edge of bleak wintry poverty. Things go wrong.

Would he do better returning to a more conventional life in the merchant marine? If loving kindness is the way to the kingdom, Davis’ life highlights its absence. The quirky, dark and grotesque humor of the Coen Brothers and the excellent acting of all involved make this an engaging film, although it is less plot driven than Coen films like “Fargo” and “No Country for Old Men.” But the need for redemption sticks with you. If you are turned off by profanity this is not the film for you. And, yes, there were abortions in the early 1960s.
My Ratings: Moral rating: Better than Average / Moviemaking quality: 4½

Stanley Hirtle, age 68 (USA)
Positive—I cannot be objective about “Inside Llewyn Davis.” I truly love this film. I have admired the Coen brothers in the past, but, for me, “…Llewyn…” is their greatest work. Everything comes together in the tremendously dynamic performance of Oscar Isaac. Isaac has here the charisma of a young method actor from the seventies. The melancholy cinematography sets the mood of the sixties folk cafe scene perfectly. And then there’s the music. The film lingered by staying with me long after I saw it. I think this is the best film in several years.
My Ratings: Moral rating: Average / Moviemaking quality: 5

Morris, age 49 (USA)
Negative
Negative—This was a boring movie. I kept waiting for it to take off and become interesting, but it did not. I am familiar with the folk scene in Greenwich village back in the 60’s as well as Chicago. I know of Jim and Jean and had their LP back then, but nonetheless there was no interest. Davis’s voice was only average and when he sang “The Shoals of Herring,” he butchered it. It was a slice of life back then but a boring slice of life. When I exited the theater I asked other viewers their opinion, and it was all the same—boring.
My Ratings: Moral rating: Better than Average / Moviemaking quality: 4