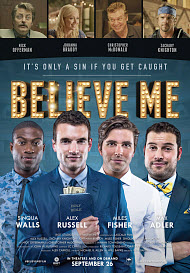 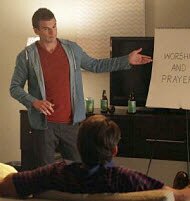 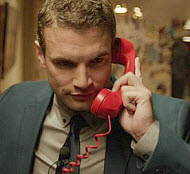 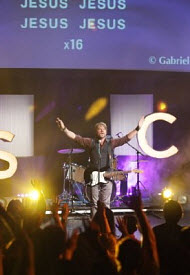 laughing about some of the things Christians do

scamming Christians to give money

soliciting donations for a fake charity

need for better financial accountability in some charities

Are many church goers gullible?

the importance of honesty and integrity

lying and deceipt in the Bible

It’s only a sin if you get caught?

Here’s what the distributor says about their film: “Sam (Alex Russell) stands on stage as thousands of fans go wild. Smart, charismatic, handsome, he moves them with his message, and when he calls for donations to his charity, the money pours in. Only thing is, Sam doesn’t believe a word he’s saying.

Just months earlier, Sam was a typical college senior focused on keg stands, hookups and graduation. But when a surprise tuition bill threatens his dream of law school and leaves him thousands of dollars in the hole, he’s forced to think outside the box. Convincing his three roommates they can make a killing exploiting the gullible church crowd, the guys start a sham charity and begin campaigning across the country, raising funds for a cause as fake as their message.

For Sam, embezzling money is easy compared to getting attention from the person he cares about the most. When Callie (Johanna Braddy), the tour manager and Sam’s love interest, finally uncovers the guys’ ruse, it’s Sam’s moment of truth. On the final night of the tour, before a packed auditorium but alone in the spotlight, it’s time for Sam to decide what he really believes.”

Negative
Negative—Acting is decent, but the satire leans towards mockery. I get what they were trying to do, but they failed. You have swearing more than once, and Christians are portrayed as gullible and foolish. (Which I think was the point, but it could have been made without the typical Hollywood taint on Christian characters.) None of the lead Christian actors, apart from the female lead, seemed sincere.

There was no saving grace. You won’t watch it and feel you want to get closer to God. In fact you may feel you don’t want to give towards missionaries anymore. I did like the fact that it exposed some christian taboos and questions our sincerity, but with so much potential to be a great movie, it’s not one for the church or family.
My Ratings: Moral rating: Offensive / Moviemaking quality: 4

Farai, age 34 (United Kingdom)
Negative—Horrible movie. Strong language, terrible writing, weak characters, lame portrait of Christians, missions, and ministry; stopped watching after 1 hr. and 13 min. in. This was the 1st time that we didn’t watch a Christian film, all the way through. My 13 year old and I agreed, “Believe Me” was worse than any secular movie, that we’ve watched together, as a family.