for sexual content, some graphic nudity, disturbing violence including a sexual assault, language and drug use. 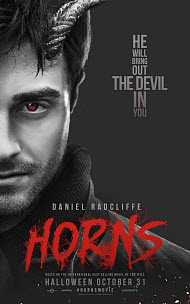 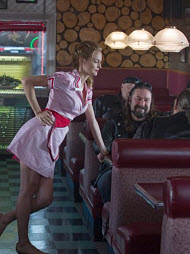 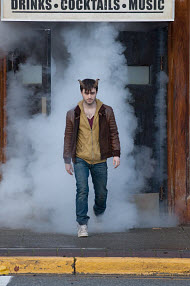 dangers of drug addiction and cocaine use 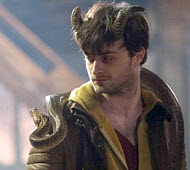 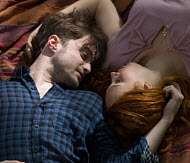 loss of girlfriend to murder

NEAR-DEATH EXPERIENCES—Who is the being of light encountered in near-death experiences? Answer

“Horn” is based on a novel by Stephen King’s son, Joe Hillstrom King. The story revolves around a man who is accused of murdering his ex-girlfriend and soon becomes cursed. He is called a devil and soon begins to grow horns, but the horns have a curious side effect. They make everyone’s darkest secrets and desires come to the surface. Ig Perrish (Daniel Radcliffe) soon begins to use this new power to hunt down the real killer.

Now, the plot itself really doesn’t sound that bad, and I have not read the book, so I will attempt to restrain my disgust for film to the celluloid version. Yes, this is a disgusting and perverse film which manages to make us lose interest in the plot and wonder if Daniel Radcliffe will ever be able to emerge from the shadow of Harry Potter. Certainly this film does not do anything to enhance his stature. Rather it makes him look desperate for a job. Perhaps he is a fan of the book, or perhaps the director sold him on the unique story line, but considering the director’s credentials is made up of slasher flicks, I would expect Radcliffe to have known better. Perhaps he just needs a new agent. Either way, fans of Harry Potter will forever mourn the death of his innocence.

Warnings for parents should be radioactive. The film is, like many Stephen King novels, packed with such vile language that it is hard to follow the conversions. One Web site that counts such words numbered over 70 uses of the F-word and a plethora of other vile words. Considering the run time of the film, this factors to the most severe curse words every minute. Frankly, it doesn’t make the language sound realistic but incomprehensible. There must be seven adjectives for every noun, so that I could not even understand what they were trying to say.

Additionally, the film leaves no perversion untold. In one scene, two police officers reveal themselves to be secret homosexuals who then begin to make out. As the camera pans away, the car can be seen shaking, as they are apparently copulating. Of course, sex and some nudity are also prevalent in the film, as all the young boys seems to lust after Juno Temple’s character. A list is unnecessary, but it includes a rape scene. [Note: Survivors of sexual assault should especially avoid this film, as scenes may trigger an anxiety attack.]

shame and rape and other rape victims’ stories

HOMOSEXUALITY—What’s wrong with being Gay? Answer

Next we come to violence, and there is no shortage of this either. One scene graphically depicts a man’s head blown off, but this is just a small taste of the gore, including the murder of a woman who had just been raped. The excessive violence and gore is a staple of Stephen King movies, but his son seems to believe that he must outdo his father, or perhaps it is the fault of the director whose expertise has been in the slasher flick market.

Finally, we come to blasphemy. If Ig becomes a devil, then he soon embraces it, literally. In order to exact revenge for his girlfriend’s death, he embraces the idea of becoming a demon. The movie seems intent upon mocking the Biblical worldview.

Who is the Devil? and What is a demon?

Now, if these reasons are not enough to avoid the film, bear in mind that everyone in this film is unlikeable. We literally get to hate every single character. It is also predictable. The real culprit is all too obvious to anyone familiar with the movie genre. Consequently, rather than keeping my interest with mystery and humor, it just repulsed me with crude attempts at humor and a predictable outcome.

The lesson here is that a unique idea does not make a good film. The story must be driven by believable characters whom we care about. No matter how different the story may seem, it is marred by poor execution, excessive shock value, and a predictable ending. I recommend everyone stay away from this film.

Neutral
Neutral—While I can see other Christian viewpoints of this film, I personally feel that there is a very moral and biblical lesson hiding amongst the language, sex, violence, and outward demonic appearance of the main character Ig. That lesson being that we are ALL sinful in nature and that giving into a revengeful spirit is the path to evil. Revenge is not for us, but for God alone.

When Ig puts on the cross, it symbolizes salvation, as only Jesus can save. He then symbolically removes the cross and falls from grace, burning in hell fire, before turning to ash. This is actually really great symbolism for a Christian who makes the choice to turn from God and take their life into their own hands. Ig is not Satan… he is the picture of what happens to man when he chooses to allow hatred to consume his life and heart.

Ig is far from the hero of the story. Not every story has a hero… and this one does not. I personally felt, that while it could have been told with much cleaner language, without the rape scene, without the pornographic sex scene etc., that it contained a message that Christians today need to hear. Revenge serves only to destroy. You have the choice to give everything to God and allow Him to fight your battle. It is only God who can rightfully assert revenge.
My Ratings: Moral rating: Offensive / Moviemaking quality: 4

Tami, age 33 (USA)
Negative
Negative—Can I get baptized again, after seeing that movie I honestly want to. I’ve seen some very risky movies that play on the Bible, but this just takes the cake; the only message in this movie is embracing that devil. He is ultimately the hero here, but I’m sorry when did we drop the standards in fearing God? The more we test him the louder will his response be. Have we forgotten Jesus said he’ll be right back, ain’t been gone for more than 2000 years, and we are already acting a fool.
My Ratings: Moral rating: Offensive / Moviemaking quality: none

Siyabonga, age 25 (South Africa)
Negative—This movie is blasphemy at the extreme. The devil is the “hero”. I am a Christian, and I don’t know why I even finished the movie. The only redeeming quality is that when he put on the cross, he was saved, but still… the devil is painted as the hero throughout the entire movie.

Even being a Christian, it is extremely disturbing how you are tempted to “root” for the enemy, because in this movie the enemy is the hero. I can’t believe Harry Potter is in this type of a movie. I hate that this movie was made at all. It is absolutely terrible.

I agree with the other comment… I feel as if I need to baptized again. I feel incredibly guilty for even watching it. I figured if Harry Potter is in it, it should be good right? Not.

Anyone who is a believer in Christ be prepared to be insulted and sad as to how this all plays out. I would advise not watching it. It is extremely upsetting. Satan is not the savior of the world, and this movie depicts him as just that. Horrible, horrible movie. God forgive me for watching it. The least I can do is write this.
My Ratings: Moral rating: Extremely Offensive / Moviemaking quality: 2

Kayce, age 29 (USA)
Comments from young people
Negative—I only watched about half of this movie, and during the movie I was curious to see if Christians had an opinion about the movie, and, after reading the comments above, I stopped the movie. The whole time I was watching the movie, I had like a bad feeling in my stomach and was trying to make sense of the secret message. Unfortunately, I was disappointed to find out it was about Satan being the hero. At first, I thought it was about the evil of people in this world and how separated they are from God, no matter how nice they may seem, but it was the total opposite.

It’s sad to know that movie makers try to make God seem like a joke or twist the story for unaware people. God gives people love and hope which is what us humans need but instead TV try’s to make it seem like God is the enemy or totally false which is just sad smh.
My Ratings: Moral rating: Extremely Offensive / Moviemaking quality: