for terror, violence, disturbing content, and language including sexual references. 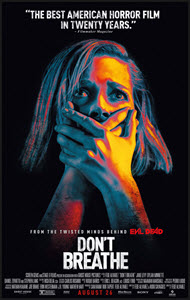 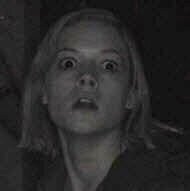 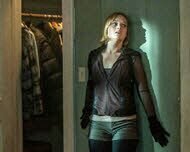 “Do not participate in the unfruitful deeds of darkness, but instead even expose them; for it is disgraceful even to speak of the things which are done by them in secret” (Ephesians 5:11-12). The world revels in darkness. Indeed, it is entertained by it. Coming out of the theater, I could see smirking expressions and smiles from some people, as if delighted by the darkness we had seen.

“Don’t Breath” begins simple enough. It has every appearance of being another low budget thriller with our “protagonists” being stalked by a cold blooded killer, but it soon takes a plot twist that has earned praise from critics, but which the Lord has warned us about even speaking about. For that reason, the reader need not fear any real spoilers, for I will not even mention some of the disgusting acts which the film portrays. Instead, I hope to warn the reader that this movie is far from entertaining, unless watching terror, torture, and barbarity is entertaining.

The story opens with three teenagers breaking into a house and looting it. One even leaves his “mark” like a dog. They then discover that a blind Iraq war vet is sitting on a large amount of cash hidden away somewhere in his house. They break in at night, but soon find themselves becoming his prey. Eventually, it becomes clear that this Iraq veteran, obviously suffering from PTSD, has no intention of letting the thieves leave his house alive. Barred windows and doors made it hard to break into, but harder to escape from.

Now, what some critics are calling “original” is really just a spin off of the old “Friday the 13th” or “Halloween” films, but in a confined area. The directing is average, the acting okay, but the cinematography is awful. It utilizes the trendy, dull, washed out colors in a way that makes “Batman v. Superman” look bright and cheerful. Now, I know that it is a horror film, but film noir managed look delivers a dark and somber mood while still providing a beautiful look and feel to the movie. The dull colors make it hard to see what is happening in some scenes, and drab looking. The worst part of the film, however, is its content.

The violence is obviously quite heavy, ranging from knifing, stabbing, shooting, brutality, and a host of gory and violent scenes which earn its R-rating. There is also the usual plethora of language and sexual innuendo. In one scene, a mother gestures in a way to emulate fellatio. Nevertheless, the worst part of the film is a mixture of sex and violence, which I will not describe in detail. While there is no nudity, and, technically, no sex, I have listed the sex/nudity content of the film as “Extreme” because of an attempted rape involving a certain object and a certain use.

Interestingly enough, the only thing in the movie worth repeating is the words of the man immediately before attempting the aforementioned action. He says, “There is nothing you cannot do, once you accept the fact that there is no God.” Of course, there is a God, but it is true that the man who has no fear of God can, and does, commit the worst of human atrocities. The worst mass murderers in history are not Islamic terrorist or medieval Inquisitors, but atheists like Joseph Stalin, Mao Tse-Tung, Pol Pot, and others. Even Hitler was a secular mystic who rejected the idea of a personal God. Therefore, if we are to take anything away from this film, it should be the depravity of the human mind and heart when God is rejected and scorned.

I cannot recommend the movie to anyone. As a film, it is a sadistic derivative of the older slasher flick. It also tends to wear out its welcome as people who should be dead get up and start fighting again, only to get killed for real. It is predictable in many ways, save the cruel acts envisioned by its antagonist. This is the sort of thing to which Paul was referring when he urged us “Do not… even speak of the things which are done by [wicked men] in secret” (Ephesians 5:11-12).

Positive
Positive—This summer has been jam-packed with excellent horror movies, starting with “The Conjuring 2,” “Lights Out,” “Don’t Breathe” and the upcoming “Blair Witch Project” and “Ouija: Origin Of Evil”. “Don’t Breathe” definitely earns it’s spot in this Summer’s best horror films (or best films of the summer), not because of the story, CGI, cenimatics, acting, or any other film-relevant categories, but because of the plot twist.

I went to see this with my girlfriend last night, we weren’t expecting much, from the trailer it looked like your standard B&E flick, victim fights back, offenders fight back, someone wins, movie ends. Kinda boring, lots of plot holes, you know. Your standard middle of the summer horror/suspense flick.

Wow, were we wrong. From start to finish, it was a crazy ride. By crazy, I mean the movie was mediocre yet oddly gripping until about the 45 minute mark. Things get CRAZY around then. I’ve seen lots of movies and lots of plot twists, but I’ve never seen one so crazy, so out of the blue, so wild that it left me in literally paralyzing shock for the duration of the rest of the movie, and for a good hour afterwards.

It’s a great movie, in that you wind up rooting for both teams, the old blind war vet and the thieves either at the same time, or different times throughout the movie. It doesn’t fall for the usual, overused and for some reason, always successful, jumpscares, but instead relies on sheer intensity to get your heart pounding and blood pumping. See all »

I’m giving this movie 5 stars, but an Extremely Offensive rating. As much as I absolutely loved the film, and I’d most likely pay another $10 to see it again, there were a lot of things that can’t be dismissed: Profanity: It runs rampant. Mostly used by teens or young adults. F-bombs make up most of the vulgarity. Violence: If you want to see a violent movie, you’re going to see the right one. It’s just about as violent as it is intense. Shootings, stabbings (including an off-camera stabbing with pruning shears), beatings (With crowbars, fists, hammers, smashing people’s heads into walls, radiators, you name it).

I’ll not mention the biggest, worst part, because it’s a massive spoiler and ruins the whole plot twist, but it’s bad. I don’t cringe at stuff often, but I cringed. And yelled very loudly. And as I said above. I was in shock for the rest of the movie and it took me a good hour afterwards to unwind. No nudity is shown, only implied. A character urinates (no nudity) in a house that’s being robbed.

Overall, if one can see past the fairly graphic and immoral content and see the story for what it is, refreshingly original with probably one of the best plot twists since M. Knight Shylaman’s “6th Sense,” the viewer can really enjoy the movie and leave feeling like he didn’t just burn $10. However, people more sensitive to offensive content may leave feeling filthy, unsatisfied and quite horrified. I honestly wish there were more movies that dared to stray from the path as “Don’t Breathe” did and succeeded in doing so.
My Ratings: Moral rating: Extremely Offensive / Moviemaking quality: 5

Movie Critics
……a battle of wills between two people who have done very bad things but justified their actions to themselves. The talented Levy and Lang allow us to understand their characters' polarizing choices, and place us right there in the house—with the petty criminal and the man with the dark secret, holding our breath. [3]

Dennis Harvey, Variety
…Characters are easily ranked by degrees of evil. …Which lets the audience relax and applaud all the slaughter.

Anita Gates, The New York Times
…a relentlessly violent game of hide-and-seek, much of it joltingly effective, and much of it—in the grand b-movie tradition …sick plot twist…

Kurt Loder, Reason
…It’s the dark heart underneath that makes things all the more disturbing. Everybody is wrong and wronged here, tortured and torturer. …[1/5]