for strong bloody violence and gore, some sexual content and language. 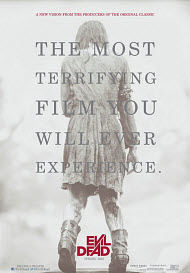 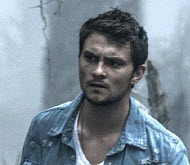 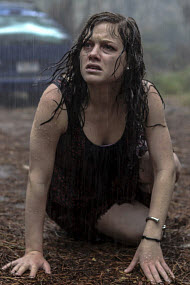 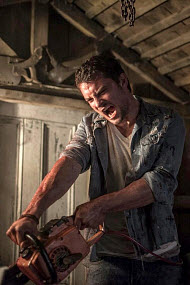 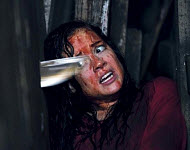 Satan and the Devil

“The most terrifying film you will ever experience,” is the advertised tagline for 2013’s “Evil Dead.” This film is not for the faint of heart or weak of stomach. The story is based on 1981’s “The Evil Dead” directed by Sam Raimi who also served as producer on the new film.

In 1981, “The Evil Dead” received a NC-17 rating for its graphic violence. Today’s version receives an ‘R’ rating, even though its violence and gore far surpasses its predecessor and matches, or maybe even outdoes, most modern horror films.

The story revolves around a group of friends taking a friend to a remote cabin to be with her while she goes through withdrawal after quitting her drug addiction. While settling in, they discover a hidden basement filled with dead animals and burn marks. They also find a bound book, the Book of the Dead. When one of the friends reads from the book, demons are released from the woods and try to possess the group as they fight for their lives.

Here are the positives about the film first, since there are very few when compared to the negatives. Some of the cinematography is very well done. The camera angles add to the eerie feeling of the film, and there are a few shots that pay homage to 1981’s “The Evil Dead.” There are a few good scare moments that are not gore infused. There is an emphasis on strong friendships and a recovering brother/sister relationship, as they try to help their friend recover from drug addiction. There is also a very short scene after the credits for fans of the original.

Now to the negatives. The themes of this movie are very disturbing. It emphasizes occult and demonic activity. There are mentions of Hell, but no mentions of God or Heaven. The violence is extremely graphic. I can mostly watch the “Saw” movies without blinking, but this one had some scenes that were hard to stomach. From the very first scene of the movie, there are disturbing images and violence. There is one particularly horrific scene involving tree roots attacking a girl. Stabbings and dismemberments abound. There are also many animal deaths that may bother people. How this movie obtained an ‘R’ rating, I cannot tell. It shows how lax our society has become in our tolerance of violence.

There is very little sexual content in the film. Some of the images in the Book of the Dead depict drawings of naked women, but there are no other nudity or sexual acts shown. Some of the girls wear very short or low cut clothing at times. The language is extreme, and there are many vulgar phrases used. There are around 30+ f-words, 5 religious profanities, and 10+ other vulgar words and terms.

This is not a feel good movie in any way. The images of demonic possession and hopelessness of the characters are truly distressing. Scripture supports the existence of demons, but we have assurance in Jesus Christ. James 2:19 states,

The characters in the film feel hopeless as they battle unknown evil, but as Christians, we are given hope in eternity with Christ and His presence to be with us as we go through the trials of life.

SATAN—Is Satan a real person that influences our world today? Is he affecting you? Answer

Positive
Positive—I loved this movie so much. I am a fan of the original, and this does it justice. It is extremely violent and bloody. This is not for kids. I’ll repeat that… it is not for kids. 18 and over only. Any movie that involves demons and such evil, I expect to see a violent movie, cause that’s what demons are. Don’t expect character development, this isn’t “Driving Miss Daisy,” it’s the “Evil Dead”!! A great movie.
My Ratings: Moral rating: Average / Moviemaking quality: 5

Andrew, age 30 (United Kingdom)
Neutral
Neutral—I went to see it last night and, to be honest, for a remake of the first film, it’s just… okay, part of what made the first one “THE Evil Dead” so endearing was that it was made on a shoestring of about $30,000 and it was obviously a “B” movie, that being said I do like that for about 90% of the FX are all practical with cgi (noticeably in the *infamous* scene) as touch up, the original was imho far more scarier and the *forest scene* was imo far more graphic.

There were some nods and winks to the original (and second as well, my personal favorite), the movie isn’t all that gory I felt as opposed to being very bloody, in fact it was unintentionally humorous in one instance but I digress. It is what it is and to give this movie a negative is purely redundant but it doesn’t by any means warrant a positive, at best its simply a solid yet okay remake at worst its shallow and the pacing is WAAAAY off! Too little suspense or build up to it, in my opinion.

Also, I must say if you watch the red brand trailer on facebook or youtube you will see more or less all of the maiming and bloody scenes so I knew exactly what I would be seeing before I even came to the movie, its silly its stupid and its shallow but Bruce Campbell as Ash makes a 2 second appearance post credits to say his infamous ED2 line! Fans of the trilogy will know what I mean (but fans of the trilogy will not see this).

I do wish to say several things on the violence of the film. 1. I have seen police archival footage of car accidents through a mandatory driving class and war aftermath footage at the museum of tolerance in California and quite frankly NOTHING in any movie could ever replicate the utter horror of real life violence and atrocity, call me “desensitized” to movie violence, but the footage I have seen will forever be burned into my mind more so than any horror or over the top action movie could ever come up with.

2. The MPA has a very… odd double standard of rating film (watch this film is not yet rated for a very detailed and in depth explanation of what I mean), long story short, violence is a-okay with the MPA, but sex is not.
My Ratings: Moral rating: Extremely Offensive / Moviemaking quality: 3

Ryan, age 25 (USA)
Negative
Negative—As a follower of the original (save the comments), this film follows a different route. The twisted mixture of horror and humor from the original simply does not exist in this remake—probably what a lot of viewers were looking forward to. Then there is the “stupid” aspect: if something very bad happens when these people separate then why are they always separating (again, and again, and again). Even the recovering drug addict that can not be left alone is, of course, left alone.

As far as the violence: remember the name of the movie; definitely not for the squeamish. Expecting to see the legendary Bruce Campbell: best grab some “Burn Notice” episodes. Moral Value: Taking your friend with addiction problems to a remote location out of their environment makes a powerful statement through friendships and trials (though it would be best to avoid the haunted areas).
My Ratings: Moral rating: Offensive / Moviemaking quality: 3

anonymous (USA)
Comments from young people
Positive—The film contains a strong element such as the demonic possession, very real, very raw, not like the original cult film, the original is more funny, gory and incredible. This cases portrayed in the film are true, many people experience, Satan is the worst. People in this cases lose their minds. Lose their faith in God. I loved the film very much. It shows a true fact that is portrayed in the film.
My Ratings: Moral rating: Average / Moviemaking quality: 5

Sergio De La Cruz, age 17 (Guatemala)
Comments from non-viewers
Negative—This movie, just from the review on this movie made me queasy, and I strongly disagree with Andrew. IF you are a Christian do not see this movie!!!…

Dacookie, age 27 (USA)
Negative—…If you will hold to the title of “follower of Christ” you ought to keep his word: “Take no part in the worthless deeds of evil and darkness; instead, expose them.” (Eph 5:11). …a “horror” movie is by nature evil. Why look for good in that? Have nothing to do with it. Yet, there are some who will find the need to justify their participation rather than keep this command. “If your eyes are unhealthy, your whole body will be full of darkness. If then the light within you is darkness, how great is that darkness!” Matt 6:23 That very darkness is what Jesus had to die for. How can you find enjoyment in it?