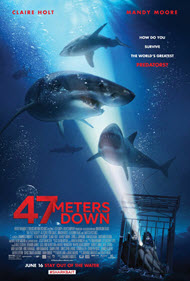 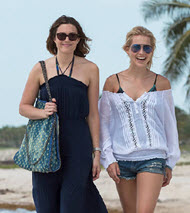 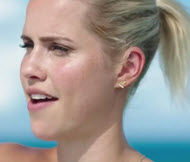 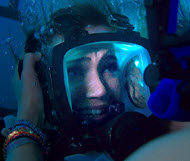 How to be calm during dangerous times

Make wise decisions by using your mind, not your emotions

Foolishness of doing very dangerous things to please someone else 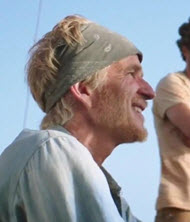 Sinful carelessness with the well-being of others 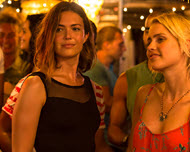 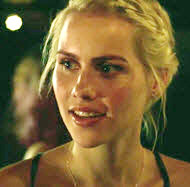 “How do you survive the world’s greatest predators?”

This film was originally produced for an immediate DVD release, but after last summer’s successful shark thriller “The Shallows,” was pulled from home video distribution and sent to theaters.

In the midst of a fun-filled vacation to Mexico with her thrill-seeking sister Kate (Claire Holt), Lisa (Mandy Moore) confesses that the love of her life has just dumped her because “he got bored.” In an effort live a little, her sister convinces her to go out on the town for a night. They meet two guys who enthrall them with stories of shark cages. Despite her serious reservations, Kate agrees to climb on a small boat, jump into a rusted cage, and descend a short distance for the thrill of her life: to spend a little up close and personal time with a half dozen great white sharks.

They take photos. They drop the camera. It falls into the depths—and into a gaping mouth full of teeth. Freaked out, Kate demands the boat haul them to the surface. And then, the cable breaks. The cage plummets 47 meters down and crashes into the sea floor. They cannot reach the boat on the radio. They have about an hour’s worth of air in their tanks. And thanks to the boat’s illegal “chumming of the waters,” sharks lurk in the murky depths…

As a pure “jump scare” thriller, this one hits all the high points; there’s an intense sense of claustrophobia in the depths. Neither the girls, nor the audience, nor the camera can see more than a few yards on either side; sharks loom up out of the gloom with disturbing ease. Each scarlet drop of blood spreads into the tide. And there’s a harrowing twist toward the end. If you don’t look too close, or question the rationality too much, it provides more shock moments and thrills than you might expect from a small budget film.

Though, as other reviewers have pointed out, it is a bit sexist: Lisa’s only reason for adventure is to impress a guy, something her sister preys on, when she goads Lisa to go against her better judgment and bad feelings about this dive, and climb in a cage, because she doesn’t want to live up to her ex’s assessment that she’s “boring.”

Safe is not necessarily boring, as she finds out the hard way.

Like most thrillers, the script does not pause to develop the characters beyond superficial assessments (Lisa is safe and fearful, but finds her courage, while Kate is brave and reckless); nor does it ponder the “losses” involved in shark-related deaths.

There are some good qualities present in the characters: once in a crisis, both sisters show selflessness in protecting and helping one another. Lisa must face her fears and find courage, in order to survive. She becomes resourceful and self-talks her way through hard decisions. Discerning viewers will also find things to ponder, such as caving in to peer pressure (and its consequences), and the perils of living your life intent on impressing someone else.

Content-wise, there’s one f-word and many uses of God’s name as an exclamation of fear. There’s no sexual content, other than a couple of revealing bathing suits. The violence is infrequent, but does turn gory; blood turns the water red (both from injuries and chum). Sharks come out of nowhere to grab/maul people; they bite down on bare legs, and leave massive chunks of flesh revealed. A woman gouges out a shark’s eye to free herself from his grip.

The biggest threat this film may have is directed toward sharks. After “Jaws” first came out in the 70s, mass hysteria resulted in the systematic hunting down and slaughter of thousands of sharks. Since Hollywood continues to use sharks as relentless killing machines (last year’s terrific “The Shallows” included), there is still much misinformation, fear, and paranoia about sharks, which are necessary to the ocean’s ecosystem and play a role of ocean scavengers more than hunters. The film will either increase interest in shark cage diving (and shark preservation efforts)… or decrease it.

The film has two terrific, harrowing moments toward the end, and, had the director chosen to conclude the story on one of them, “47 Meters Down” might have had even more harrowing impact, but, as it stands, it’s a somewhat harmless deep sea thriller.

Positive
Positive—I’m glad the reviewer mentioned the way this film presents sharks, as if their only reason for existing is to attack humans that might be nearby. Naturally, we know that movies use them that way to tap into the primal fear many people have of sharks, but the sharks in “47 Meters Down” reminded me of the hybrid sharks from “Deep Blue Sea,” as if some survived and waited around for Mandy Moore to show up.

All that said, as far as summer action/adventure/thriller movies go, this one was kind of fun and, at times, genuinely unsettling. The scene where one of the characters becomes disoriented in the deep, dark ocean was scarier to me than any danger the sharks presented.
My Ratings: Moral rating: Offensive / Moviemaking quality: 4
—Jonathan Rodriguez, age 33 (USA)
Positive—“47 Meters Down” is a criminally underated film. Well, here’s the bottom line. Cage Diving goes wrong with Great Whites surrounding the area of water two sisters are in. There is pretty much no cursing, sex, etc. There is partying with I think maybe drinking, and shark violence and blood, but truly not even close to “Piranha” (2010). I can safely recommend this intense film. Messages? There’s an hallucination. But the real thing might be better, and we don’t know… Watch and see. But the hallucination could be a message that the hallucination could be the real thing, if you think about it in a Godly hope of not losing somebody to a Great White attack…
My Ratings: Moral rating: Good / Moviemaking quality: 4

Stephen Jacewicz, age 22 (USA)
Comments from young people
Negative—I hate the ending, to be honest. I wish instead of the good ending being a hallucination, it should’ve been the actual ending.
My Ratings: Moral rating: Good / Moviemaking quality: 4

Movie Critics
…effective thriller …an underwater nail-biter… quick set-up, rapid pacing…
Frank Scheck, The Hollywood Reporter
…thrilling summer fun… keeps ramping up the tension, and it mostly works, even when a plot device or two might seem to contradict common sense. …
Cary Darling, Fort Worth Star-Telegram
…You’d bet a shark thriller with Mandy Moore would be all about seeing her in a skimpy swimsuit. And you’d be wrong about “47 Meters Down.”…
Ariel Scotti, New York Daily News
…a nifty little summer scare movie that looks great on the big screen… it’s best approached with reasonable expectations…
Maitland McDonagh, Film Journal International
…A formulaic but effective thriller… entertaining… compact and sturdily crafted B-movie…
Joe Leydon, Variety
…Roberts artfully stages the film to provide maximum anxiety without totally pushing the boundaries of believability—thankfully, we do not have a single, oddly fixated predator shark who acts out of anthropomorphic hostility, but rather, a series of curious fellows, who are really only looking for easy edible pickings—the physical dread is enough to keep the film churning along. …
Piers Marchant, Arkansas Democrat-Gazette
…“47 Meters Down” has sharks, and sometimes that’s good enough… just enough tense, nail-biting moments while the clock is ticking – even if he cheaps out a bit on the shark stuff. …[B-]
Chris Nashawaty, Entertainment Weekly
…doesn’t have the campy sparkle that made “The Shallows” a cult hit, but it’s the kind of cheesy thriller that’s good for a few jumps and a few chuckles at its own silliness. …
Katie Walsh, Tribune News Service
…“47 Meters Down” isn’t a bad movie, just a silly shark movie that requires its characters and audience to be dumb in order for it to be entertaining. …The sharks aren’t the real villains, its human stupidity and arrogance that actually kills people. …[C-]
Tim Hall, SeattlePI (Hearst Seattle Media)
…it’s not very smart, and it’s not very thrilling. In the small, modern tradition of killer shark movies, it’s a guppy. …You may find yourself on the edge of your seat. But it’ll only be because you're peering at the screen, trying to figure out what’s going on. …
Stephen Whitty, The Star-Ledger
…Bad dialog, bad decisions and bad plot holes lacerated the tension the film sought to build, prompting repeated guffaws from the audience. … [3/5]
Adam R. Holz, Plugged In
Comments from non-viewers
Negative—I have not seen this movie and never will; as an animal lover, I am so sick of these documentaries and movies about humans being the victims of shark attacks. The fact is, people are foolish enough to go out into the open waters which are the shark’s home! Can you blame the sharks for attacking you?! If someone were to break into your home—you will fight them wouldn’t you?!

Movies love to demonise sharks, the fact is not all sharks are dangerous, if people watch decent documentaries about this—you’ll see sharks can actually be quite gentle in personality, I’ve watched documentaries where people have gone in the water and fed the sharks with no problems whatsoever.

Movies and a lot of documentaries complain about shark attacks, when humans are responsible for killing thousands of sharks every month.

Bottom line, I’m not going to even feed into the anti-shark agenda that the movie world is trying to sell me. The only shark movie that is half-okay is the 90s movie “Deep Blue Sea” and even that is a bit harsh at times, but at least there were no real sharks.

Overall, if I was to go out into the open waters and swim, i’ll only have myself to blame if I get attacked by a shark.

I haven’t seen this movie, but it is obvious the main characters did not know what they were doing, they put themselves in that situation. I won’t watch this flick, but I do however, love the film score soundtrack composed by tomandandy, as a hardcore film music buff I will say that the score is powerful, subtle at times and thrilling.