for some impolite humor, and action. 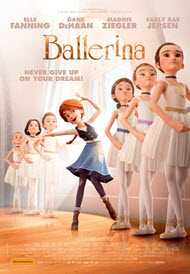 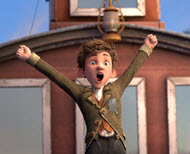 About orphans in the Bible

Living with a disability

Dreams of becoming great a something you love

About dancing in the Bible

Camille is made to practice dance at home for hours each day.

The hard work, heavy training and dedication requirted to succeed as a ballet dancer

Parents who are obsessive and push children too hard

Dancing on rooftops is dangerous.

importance of respecting those in authority over us 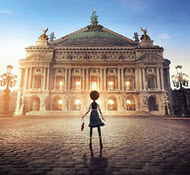 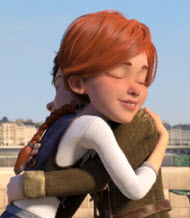 “Leap!” is a fun CGI-animated kids movie about two orphans, Felicie and Victor, who escape their Brittany orphanage and hop a train bound for Paris to fulfill their dreams of becoming a famous ballerina and a celebrated inventor, respectively. It feeds the audience the usual, benign “follow your dreams” kind of preaching that is prevalent in so many kid’s movies, yet mixes in some truly amazing animation, especially in the way of the architecture and landscapes of 1879 France.

The details in this movie’s animation is where its wonder and watch-ability for adults lies, right down to the chipped paint on the orphanage’s metal beds and the glow from iconic glowing streetlights of Paris. It gently borrows some elements from other familiar orphan movies, namely the dizzying ladder chase scene from “Annie” (1982) and the motif of a music box being key to the protagonist’s past from “Anastasia” (1997).

Those characteristics, plus the fact that all three movie orphans I just mentioned all have bright red hair, makes “Leap!” feel a little path-worn for adults. Kids, however, will love the high-flying action on homemade glider machines, energetic dance scenes, simple slapstick humor, and the overall vibe of child-empowerment that this movie provides.

As Félicie tries to pursue her goal of becoming a ballerina, first by being accepted as a student at a famous ballet school, she climbs the ladder of success through dishonesty. She is admitted to the school under false pretenses, stealing the identity of her rival, Camille. In the end, she is slightly chastised for her lying but rewarded anyway by her teacher due to her hard work and persistence. Victor also lies to Félicie while trying to impress her. He pretends to be the assistant engineer to a famous inventor when he is really acting as an errand boy/janitor.

Is it really okay to commit crimes, take a false identity and tell lies and do physically risky things to fulfill a dream?

Or is much more important to do what is good and right?

For some odd reason, this movie is also obsessed with roofs… There is dancing on roofs, falling on roofs, surfing down the side of roofs, escaping various locations by the roof, jumping off roofs, even sleeping on roofs… So, if you bring a kid to this movie, obviously make sure that they know that it isn’t a good idea to sleep overnight on a roof.

There are also a lot of music numbers involving dramatically throwing various dishes, which I wouldn’t want a child to emulate.

The movie teaches persistence, loyalty to friends and teachers, and the value of humility. Odette (Carly Rae Jepsen) is a maid who used to be a ballet dancer who takes in Félicie. Odette looks and sounds exactly like Idina Menzel, so much so that it must have been intentional by the filmmakers, and I was taken aback at the credits that it wasn’t her.

There is one moment where Camille’s evil mother is pressuring her to practice her ballet past her breaking point, and the mother says, “I’m going to get that part!” Her character serves as a pointed reminder to parents to not live vicariously through the victories of their children.

There is also emphasis on pursuing something, like dancing, for the right reasons rather than merely for sheer hostile competitiveness. “Leap!” buys into the trope of teaching kids that if they want something the most and are the most passionate person vying for that thing that they will surely get it, which is at best idealistic and at worst deceptive.

As far as objectionable content, one character tells Félicie that her dancing “s*cks.” Luteau (Mel Brooks), a worker at the orphanage, and Regine (Julie Khaner), Camille’s spider-like mother, are both menacing villains, Luteau being inexplicably made righteous at the end of the film, changing his tyrannical tune for no apparent reason.

Regine chases Félicie with a hammer and a wrench, trying to kill her, rather than let her win a ballet role over her daughter, Camille. This chase sounds scary, but is more reminiscent of comical villains, in that Regine gets continually thwarted as the kids prevail.

There are scenes in bars and lots of flatulence jokes, one even as far as to light one with a match in one bar scene. A character also says he “wet” himself, and there are lots of comical hits, bangs, pratfalls, and slapstick moments.

However, do not go to this film thinking of it as a fun, educational way teach kids about 1879. Being a bit of a history buff, there were lots of forehead slap moments for me. For instance, Felicie wears skin tight short shorts for most of the movie (with tights underneath), which weren’t worn until the 1950s.

The film shows the Statue of Liberty and the Eiffel Tower as being built simultaneously. First of all, the Statue of Liberty was created in pieces, not as the whole seen in the movie, and it was also not its iconic green initially. According to The New York Times*, “The layers on the statue are not corrosion; it is a thin protective layer that covers the surface of exposed copper known as a patina. This green patina began gradually covering the surface of Miss Liberty just after 1900, and was noted in the press at least as early 1902. By 1906, the goddess of liberty was entirely green. Before the color change, Miss Liberty was copper colored, but not shiny.” The Statue of Liberty was dedicated in New York City in 1886, and the Eiffel began construction in 1887—they did not cross paths.

In addition, there is a Sherlock Holmes joke, and the first Sherlock story wasn’t even published until 1887, almost a decade after this movie is supposedly set. The filmmakers would’ve done better to not set the date of the movie as exactly 1879, but just let it reside in some made-up Victorian-ish era and leave it at that. Giving it a specific time stole some of the magic from me that I might of granted it and distracted from the story itself.

Please be aware of the possible trailers before the movie that might seem a bit scarier for little ones than the actual feature film. At my viewing, there was a trailer for “Coco,” the new Disney/Pixar Day of the Dead themed movie that has some frightening skeletons and other death-related imagery. In the trailer I saw, a young boy asks a skeleton at a desk who these other skeletons who are following him are and the desk-skeleton says to the stricken boy, “This is your family!” The kid then looks from the smiling skeletons to a family photo of himself with his family, with his dad’s head partially ripped off the photo. That’s about as dark as it gets, I’d say, showing a little kid his dead family in animated skeleton form.

There was also a preview for the new Lego “Ninjago” film, which has as much fast-paced, ninja fighting action and crude, pants-being-pulled-down kind of humor that could possibly be smashed into the short trailer. The other trailer featured was for “Duck, Duck, Goose,” a movie about an immature goose being pressured by his peers to grow up, whose tagline is: “If he doesn’t shape up, they’re all plucked.” Wow.

That said, this is a mostly pleasant way to spend an hour and a half with your ballet-obsessed little daughter or niece, and the roguish Victor is enough to satisfy her brother who had to tag along, too. It is a colorful, lightly fun adventure with a little romance and a little nonthreatening banner waving about “following your heart” and “following your dreams” and all those kinds of hollow yet cutesy, non-specific, feel-good kinds of sentiments. It is not a life-changing film, but kids will love it while they’re watching it.