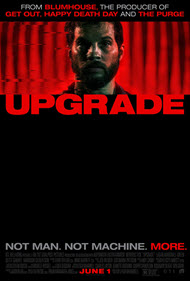 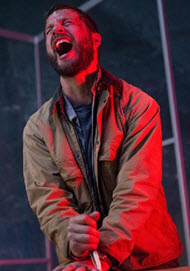 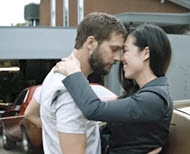 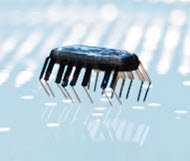 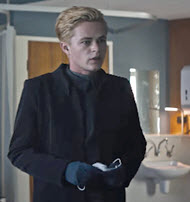 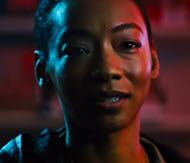 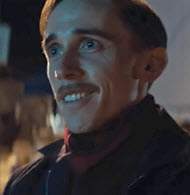 Here’s what the distributor says about their film: “Grey Trace, a technophobe in a utopian near-future when computers control nearly everything - from cars to crime-surveillance - is paralyzed in a freak mugging. But when a billionaire technologist offers him an experimental paralysis cure, an implanted computer chip called STEM. Grey finds that the chip has a voice and a mind of its own.”

Neutral
Neutral—“Upgrade” is a Blumhouse film, which I associate with grisly violence. It was with trepidation that I watched it, not expecting much of a plot line, just a reason to show gory scenes. In actuality, there was far less gore than I expected and an interesting plot line, not one often seen. Whereas Hollywood seems to share the same story line over and over, this was a new story.

The film opens with Grey working on his car. When he enters his home, there is such a dichotomy. This home is modernist/industrial/minimalist all in one. It’s stark and cold and gray. We see a man who doesn’t seem to fit in this world, who is a hold over to a different time when technology didn’t run the world. His wife on the other hand has a high tech job and fits perfectly in that world.

When tragedy strikes, and he is hurt, he is given the option to have an implant that will help him heal. Wanting revenge, he agrees. As the title of the movie says, this implant is an Upgrade of his current, as well as, former self. He has cunning and strength. He learns far more than he bargained for in his quest for revenge. I’ll leave it at that. I do not like giving away too many details and the story line because for me, that is the fun of seeing a movie. (I’m the type that won’t look at the box when putting together a puzzle so to give too much detail gives things away).

What I will say is this is a violent film but not to the extent I expected. I did look away expecting graphic violence to the extreme but it was not grisly. I can’t best describe it—you have to be willing to tolerate violence to see it but to gage it, maybe I can say, I looked away when I used to watch “The Walking Dead.” I think that show was more grisly. I know there is bad language, but I didn’t take note as I wasn’t watching to review it.

Where this movie excels is its originality. The closest movies I can compare it to are “Repo Men” and “District 9.” Both of those films are a dystopian future involving symbiont relationships with a foreign entity and the struggle that brings. The main plot of “Upgrade” is a cool storyline, refreshingly different and worth a watch if you are one who would not be offended by the violence. It’s not a great movie, but interesting, so I gave it a Neutral rating.
My Ratings: Moral rating: Very Offensive / Moviemaking quality: 3

Secular Movie Critics
…An irresistibly gory science-fiction melodrama, is B-movie schlock done right. …
Simon Abrams, RogerEbert.com
…What Whannell wants most to do is torment and eventually pulverize most of the people in his narrative orbit and make you laugh while he does so. …
Dave White, The Wrap
…“Upgrade” is a brutish, efficient and well-executed slice of cyberpunk action horror with a silly streak. …
Katie Walsh, Tribune News Service
…No need to see Upgrade when you’ve already seen it 1,000 times… As a movie, it’s the cinematic equivalent of paint-by-numbers: competent, attractive even, but take a single step closer and the lines peek through. … [C-]
Dana Schwartz, Entertainment Weekly
…The film isn’t a dud—it “delivers the goods” in a certain reductive, baseline action-fanboy way. Yet Upgrade is the sort of movie that thinks it’s more ingenious than it is, starting with the premise, which is a semi-catchy, semi-stupido hoot in a way that the movie couldn’t have completely intended. …
Owen Gleiberman, Variety
…Whannell is learning how forward motion can allow a filmmaker to get away with some pretty outlandish brutality. I wish the talk-dependent sequences weren’t so foreshadowed and clunky…
Michael Phillips, Chicago Tribune
…Whannell’s finite reserves of creativity have been meted out in an imbalance, going all in on world-building while giving the fight choreography and the cinematography listlessly documenting it the short shrift. …
Charles Bramesco, The Guardian [UK]