for some language and peril. 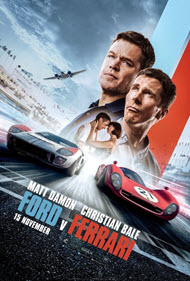 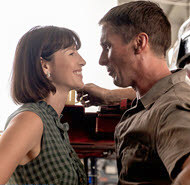 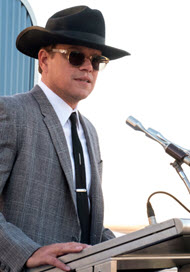 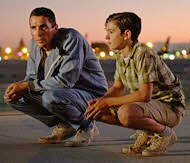 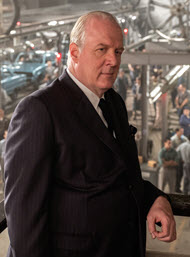 The 24 Hours of Le Mans race

Class struggle between corporate managers and the more lowly, but skilled creative workers 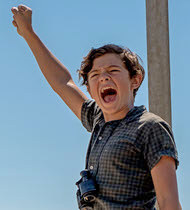 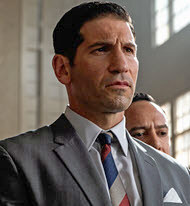 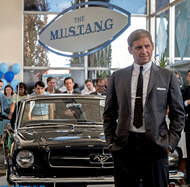 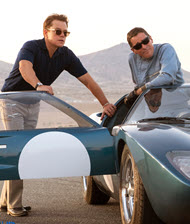 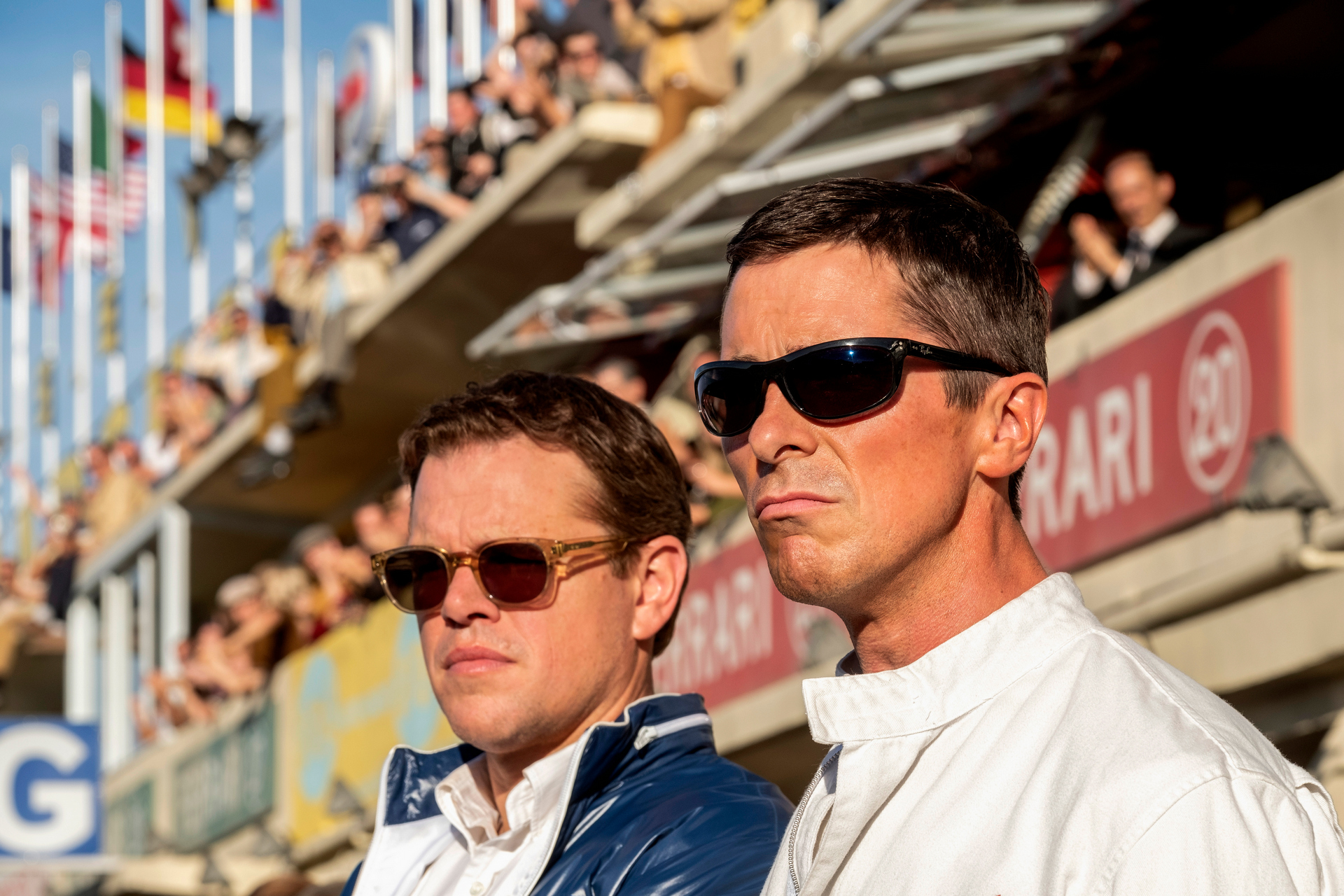 Based on the actual events that took place at the 24 Hours of Le Mans race in 1966, “Ford v Ferrari” sets up a David v Goliath scenario where an American driving car brand (Ford) tries to dethrone the perennial champion Italian race car brand (Ferrari). To mix sports metaphors, if this sounds like the “Miracle on Ice” for the racetrack, you’re in the ballpark.

The movie opens at the 1959 Le Mans, where bleary-eyed Carroll Shelby (Matt Damon) pushes through fatigue and rainy weather to win the famed European car race. Jump forward a few years to a boardroom meeting at the Ford Motor Company. Henry Ford II (Tracy Letts) wants some new ideas to move the company forward. A member of the marketing team, Lee Iacocca (Jon Bernthal), comes up with a wild idea… a Ford race car.

Ford PR specialist, Leo Beebe (Josh Lucas), enlists the aid of Shelby and his team of engineers to build a prototype car for the express purpose of defeating Ferrari at Le Mans. Though designing and building the car proves to be a colossal effort (especially since they’re only given 90 days), an even greater challenge is getting everyone to agree on who should drive the car. Shelby wants his long-time friend, Ken Miles (Christian Bale), but the Ford team wants anyone but the abrasive, hotheaded speedster. The drama that ensues has just as many treacherous turns as the legendary racetrack.

What initially attracted me to this film, after seeing the trailer, was the winning combination of Matt Damon and Christian Bale. Here are two A-list actors at the top of their game in perfectly-cast roles delivering pitch-perfect performances. Acting of this caliber is a joy to behold and screen chemistry this refined is a true rarity.

Fortunately, the great performances don’t end with Damon and Bale. The movie is chock-full of terrific supporting actors like Letts (“The Post”), Lucas (“Glory Road”) and Bernthal (“The Walking Dead”). Other memorable performances are turned in by Caitriona Balfe (“Outlander”) as Miles’ wife Mollie, Noah Jupe (“A Quiet Place”) as Miles’ son Peter, and Ray McKinnon (“Fear the Walking Dead”) as Shelby’s reliable and wise assistant, Phil Remington.

Director James Mangold (“Walk the Line”) strikes the perfect balance between character moments and action scenes, lest one or the other should drive away with the movie. Mangold captures gritty, organic performances from his actors. One of the most remarkable bits of acting is when Ford II breaks down after Shelby takes him on a test drive in the new race car. Letts masterfully modulates (gear shifts) his emotions to the point where we’re not quite sure if he’s laughing or crying. An unforgettable scene.

Although all of the movie’s race sequences are spectacular (like the unforgettable “brake fade” scene), the start of the Le Mans race is a ferocious, frenetic experience, especially the images shot from Miles’ POV, where cars spin out of control or shatter into mounds of debris right in front of him. Thanks to Mangold (and his cinematographer, Phedon Papamichael), the race scenes aren’t overly jarring or one big motion blur as seen in many action movies today. Also, effective is the way Mangold crosscuts action on the track to drama (or comedy) in the pit.

The movie perfectly captures the milieu of the 60s. From clothes, coifs and cars, to products (sodas in glass bottles) and advertisements (a giant billboard of the Coppertone girl, which has her diaper pulled down in the back by a naughty dog), the attention to historical detail in the film is remarkable.

Using that inappropriate billboard as a jumping-off point, let’s take a look at the movie’s objectionable content…

“Ford v Ferrari” is a fairly clean and wholesome movie, with one major exception… it’s inundated with foul language. The film could’ve had a wider appeal (across all demographics) had it cleaned up its act. What a shame!

Though opinions vary as to whether the British word “bl**dy” is a swear word or not, it’s spoken roughly 10 times. One of those occurrences is, arguably, the funniest line in the movie: “The bl**dy door won’t close!”

The movie also contains a few instances of racism. Early in the movie there’s a slur about Germans. One character is called a “greasy wop.”

There isn’t any sex, and the only nudity in the film (is that billboard and some women in bikinis). Miles and his wife engage in a string of car-related double entendrés early in the film (wood, rubber, etc.). Miles kisses his wife in two scenes.

There’s some alcohol consumption. Various people drink beer or champagne, a man pours a drink for someone in a stressful time, and Miles and his wife drink wine in one scene and are shown drinking on their porch in another. A drunk is seen on a street.

Other than a scene where Miles tosses a wrench that shatters a windshield, the only significant violence is when Miles and Shelby get into a fistfight. Although the race scenes feature several car crashes, no blood or gore is shown in those shots.

The movie doesn’t contain spiritual content, per se, but there are positive and negative examples of human behavior that we can draw lessons from.

Miles is an interesting character study. As a loudmouthed hothead, he’s earned a bad reputation among the racing community. Miles’ checkered past comes back to haunt him when he’s passed over to drive the new Ford race car. The corporate men want a Ford-type driver in their car, and Miles (they refer to him as a beatnik) definitely doesn’t fit the bill. This reveals the Ford executives’ prejudice against Miles, since he’s clearly the best man to drive their car.

Despite his propensity to spout off about whatever’s on his mind (his critique of the new Ford Mustang is priceless), Miles has trouble communicating with his wife. Miles initially keeps her in the dark when he’s approached by Shelby to help design the new Ford race car. Later, when Mollie drives recklessly down the road (in a humorous role reversal, the race car driver has fits of anxiety over his wife’s driving), he finally confesses that he might be in line to drive at Le Mans. Interestingly, Miles’ Le Mans experience begins and ends with the words “slow down.”

Unlike with his wife, Miles has no problem talking with his son. There are two beautiful father/son scenes. The first is when Miles takes Peter out to the racetrack at night. Miles envisioning the “perfect lap” is a magical moment. On the eve of his departure to France, Peter shows his father a hand drawn map of the Le Mans race course. In another teary moment that reveals the special bond between father and son, Miles describes to Peter how to handle each part of the track.

During the race, one driver, in a dirty maneuver, forces another car off the track. Miles is infuriated by this and pulls the same stunt on the shady driver. Although we might be tempted to applaud Miles’ actions, since justice was served, revenge isn’t a righteous action. “‘Vengeance is Mine, I will repay, ’ says the Lord” (Romans 12:19).

Shelby also reveals a lack of integrity in two scenes that are played for laughs. In the first, he steals stopwatches from the Italians, an action that’s in violation of God’s laws (Exodus 20:15). In another scene, Shelby quietly enters the Italian racing pit and drops a lug nut on the ground. The Ford crew gets a good laugh when one of the Italian mechanics discovers the nut and fears that he sent an unsafe car onto the track.

This deceptive behavior is reminiscent of the way Jacob schemed his way into receiving his father’s blessing (Genesis 27:34-40). Jacob gets his comeuppance when Laban tricks him into marrying the wrong woman (Genesis 29). In a similar way, Shelby’s chicanery comes back to bite him when the Ford executives strong-arm him into making a bad decision that will cost his friend dearly in the race.

Meddling by the higher-ups at Ford is a constant in the film. There’s a distinct class struggle that exists between the suits and the grease monkeys. The political tension is a diverting story element and serves a necessary role since there isn’t an actual villain in the movie. If there’s a downside to the constant friction between the pit and the box seats, it’s that it takes our attention away from the race. As a result of the political sidebars, the movie never quite captures the war of attrition that’s waged on the racetrack as was convincingly portrayed in Steve McQueen’s “Le Mans” (1971).

“Ford v Ferrari” is high-octane biopic fueled by sure-handed directing and top-tier acting. Though not an overt “buddy movie,” Damon and Bale deliver stellar performances as loyal friends who have a need for speed.

“Ford v Ferrari” is a long film that never feels long thanks to its bracing drama and pulse-pounding action sequences. The movie should receive nods in many categories come awards season.

The movie’s major blemish (grease stain) is its unsavory dialog, specifically expletives and crass speech. Other than that unfortunate aspect, I highly recommend this film for history buffs, gearheads or lovers of well produced films.

The most accurate description of the film comes from one of its most amusing lines… “Ford v Ferrari” is “finer than frog fur.”

Positive
Positive—I did not know what to expect, but curiosity got me to borrow this movie on DVD from the library. I thoroughly enjoyed it, and the acting by Christian Bale and Matt Damon were spot on, as your reviewer so correctly stated. Your review covers beautifully all aspects of this well-written, well-edited and well-directed movie. It won awards for sound. I am not a lover of cars, but I found the story of building a race car and then driving it fascinating.
My Ratings: Moral rating: Average / Moviemaking quality: 4½

Halyna Barannik, age 73 (USA)
Positive—Mainly historically accurate, but full of minor inaccuracies—missing people like Pete Brock, a major person in in Shel’s and Ken’s life. The Sunbeam Tiger outside the garage was the wrong year. (Ken Miles built the first Tiger prototype. He put a Cobra engine in a Sunbeam Alpine for a man named Ian Gerrard.)