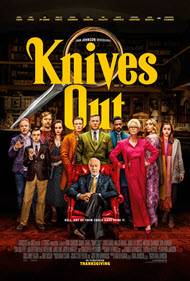 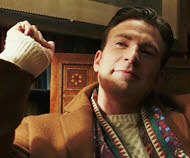 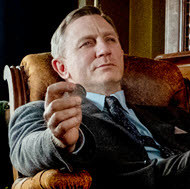 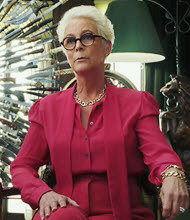 Continual use of profane and vulgar language

Illegal entry into a country

Last will and testament

The sin of greed 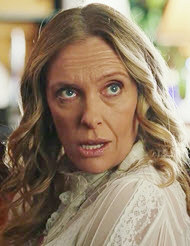 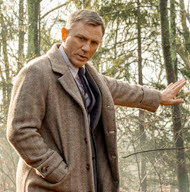 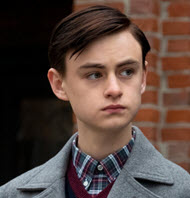 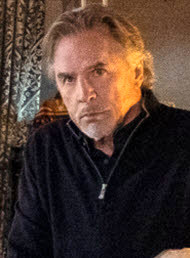 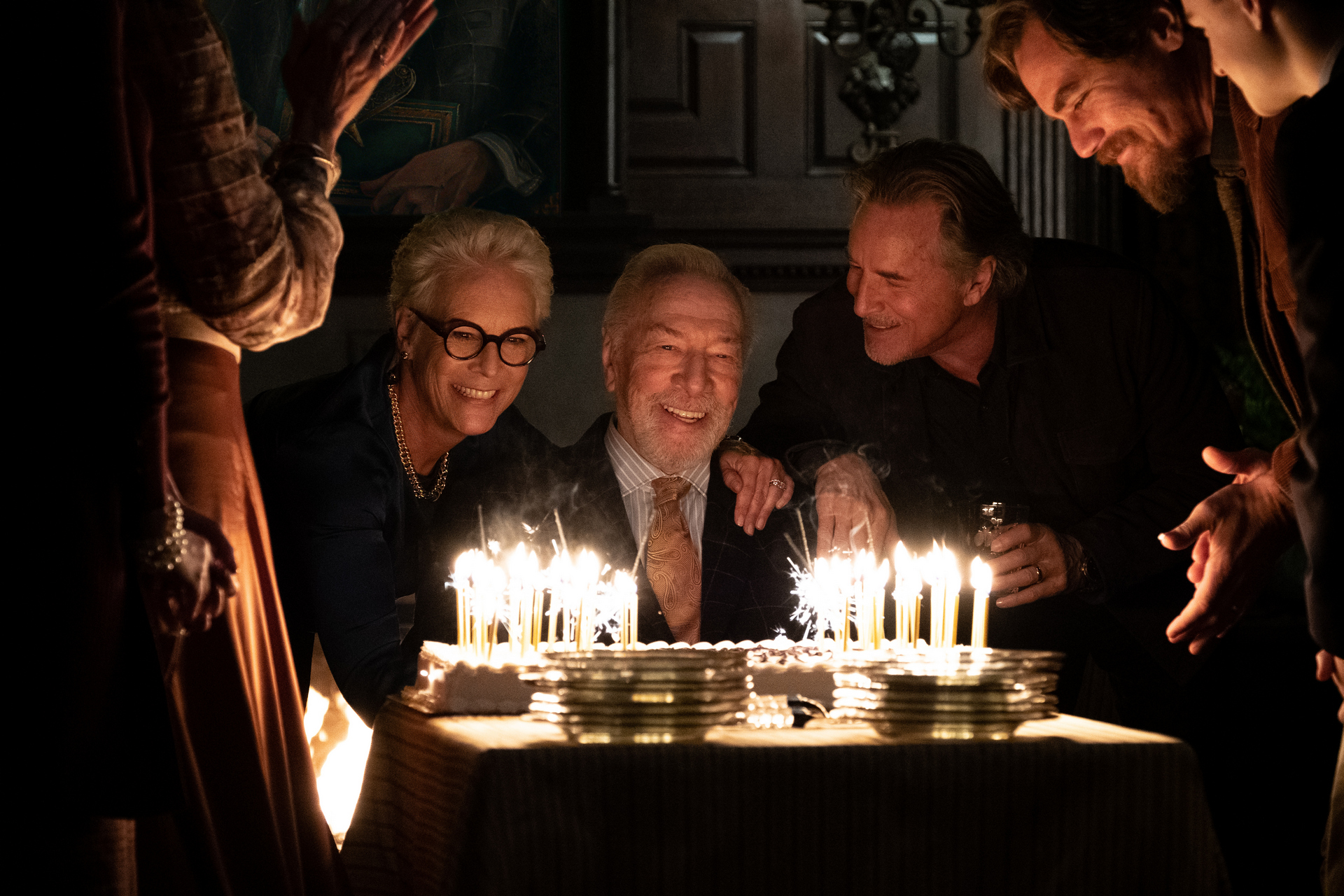 Happy Birthday Harlan! Famed mystery writer Harlan Thrombley is turning 85 this year! And what better way for him to spend his birthday than with his family at his mansion in Massachusets.

The next morning, however, the family awakes to a startling revelation… Harlan is dead. The police state that he killed himself in his study, but no one really quite knows the reason why. So obviously the police start questioning the members of the family. There’s Walter Thrombley, in charge of all the management and decision making on behalf of Harlan’s publishing company. There’s Meg Thrombley, Harlan’s granddaughter. Then there’s Jacob Thrombley, who everyone says is the odd one in the family, so maybe he had something to do with Harlan killing himself. The list continues: Joni, the daughter-in-law, Linda, and the one who is ALWAYS either fashionably late or absent entirely, Hugh Drysdale. And then there’s Marta, Harlan’s nurse, but really, she’s couldn’t harm a fly. Phew!

As the police, and private detective Benoit Blanc (Daniel Craig), question everyone, Blanc states that the family’s stories just don’t add up. He declares that someone knows exactly what happened to Harlan and that Harlan’s death was NOT a suicide, but, in fact, a murder.

With everyone’s suspicions raised and tensions rising, it’s only a matter of time before someone breaks, and when they do, there’s no telling what might happen.

The game is afoot!

I say all of this because “Knives Out” does what “Murder on the Orient Express” did not. It eliminated the confusion, while maintaining the quality of filmmaking. I did not, at any time, feel the pacing was lethargic or tedious. Initially, I feared that with number of characters in the Thrombley family (10 excluding Harlan, the nurse Marta and the Grandmother I failed to mention), and their backstories and interactions with Harlan prior to his death would overwhelm the plot. While this is the case for about the first 20 minutes or so, the stories of each of the characters start to align with the film better, and the confusion evaporated.

This film is not flawless. There are two relatively major issues: language and politics.

The language is abrasive, crass, and pretty much all unnecessary, especially the sexual dialog. There are political conversations (and some innuendos) that attack those who support legal immigration. In my view, it is very apparent that the film mocks those who support legal immigration and legal immigration enforcement. One conversation even occurs between family members regarding Marta and her mother’s immigration status and how they could deport her because they came into the country illegally, even though they always treated her like family (to state anymore about the conversation would give away major spoilers). Every time I heard another political conversation I couldn’t help but let out an, “Uggg” under my breath. I’ve ranted about this before, but I’ll say it once again… Hollywood, keep politics out of the movies. This film didn’t need it.

Violence: Moderately Heavy. Harlan is shown deceased with his throat sliced open (not a spoiler). A character is given a lethal injection. A character is seen slicing their own throat. We see a statue of a boy with a decapitated head in his hand. A family is threatened with deportation if they don’t cooperate. There is a scene where a building is on fire (we see the same building on fire in a later scene). Someone is seen asphyxiating on methamphetamines. Someone suffocates on chloroform, and is injected with morphine. Someone attempts to stab someone.

Other questionable and inappropriate conversations include discussions about how people are murdered, calling someone “the help” based on the color of their skin and their ethnic heritage, two conversations about marijuana, and the phrase “up your a**” being used.

Sex/Sexual Dialog: Moderately Heavy. There are two incredibly inappropriate conversations about a young girl having sex with Harlan. A man is pictured kissing another woman (he is cheating on his wife). There is also an inappropriate discussion about a young boy self-pleasuring (he is later seen on the toilet with a magazine).

Alcohol: There are multiple scenes where characters are seen drinking (at parties, by themselves, etc.).

Other: There are a few tasteless jokes about people of different ethnicities. This film also has a clear political message and mocks those who are for illegal immigration reform. A woman is seen meditating. A girl is seen vomiting a few times (no vomit is actually shown), but in one scene she actually vomits on someone.

In the second half of the film, one of the central themes that the film focuses on is greed.

“No one can serve two masters. Either he will hate the one and love the other, or he will be devoted to the one and despise the other. You cannot serve both God and Money.” -Matthew 6:24

“He who trusts in his riches will fall, but the righteousness shall flourish as the green leaf.” —Proverbs 11:28

Our riches, our real treasure should be what we do and believe in God’s Holy name:

“Instruct those who are rich in this present world not to be conceited or to fix their hope on the uncertainty of riches, but on God, who richly supplies us with all things to enjoy. Instruct them to do good, to be rich in good works, to be generous and ready to share, storing up for themselves the treasure of a good foundation for the future, so that they may take hold of that which is life indeed.” —1 Timothy 6:17-19

If you were to set aside all the language, violence and politics, you’d have a pretty amazing film. Stellar performances, fine cinematography and plenty of humorous moments make for a very different, yet intriguing, take on the average mystery.

However, the content is still there, and that’s unfortunate because it really wasn’t needed. I hope there comes a day when Hollywood will clean up its act. I cannot recommend “Knives Out” due to the content listed. What a shame.

Positive
Positive—In reference to the critic’s complaint about the inclusion of politics in this murder mystery story: the politics, as presented in this film, are less about Hollywood sticking it to its audience and more about highlighting the Thrombey family’s hypocrisy. It’s not about “liberal vs. Conservative;” it is making a point about people who hold certain views (rightly or wrongly) and yet don’t actually care about the people whom their views affect. The family members presume because they come from money and status (all due to their father’s hard work and generosity) that this makes them better than everyone else. But they are wrong. See all »

They claim Marta is like family and yet they couldn’t tell you what South American country she is from (they repeatedly say different places throughout the film). They claim to love Marta but yet won’t let her attend Harlan’s funeral and lie to her face about it (“I wanted you there but I was outvoted”). They claim to have Marta’s best interests at heart; and yet when she is announced to be the sole benefactor of the will, they attack her and threaten to use the information regarding her mother’s legal status as leverage to take back their inheritance. It’s one thing to say, “Hollywood, stop putting politics in movies” when the inclusion of such a topic doesn&rsquott add anything to the story.

But in this case, director Rian Johnson is making a further point about the Thrombey family’s greediness and insensitivity. The way they live and the things they believe do not make them better people. And at the end of the day, our political views should help us care about the least of these in our country, not set us up on a pedestal to judge the people “beneath us.”
My Ratings: Moral rating: Better than Average / Moviemaking quality: 5

Kaitlin, age 32 (USA)
Positive—We went to see this movie last night (parents only). I was engaged and on the edge of my seat the whole movie. It moves fast. One of the few films I couldn’t figure out completely before the end.

There is some language, but the movie was great. Would recommend as an adult date night movie.
My Ratings: Moral rating: Offensive / Moviemaking quality: 5

Tracy, age 50 (USA)
Neutral
Neutral—…my family went to see this on a crowded Thanksgiving weekend, and the movie had everything—a good mystery, a few good laughs and thick plot—very interesting. HOWEVER this was wrongly marketed. It’s marketed as a fun film for the whole family. Well about five minutes into the movie YOU find out this isn’t the case. There is profanity THROUGHOUT the movie and even some with the Lord’s name involved. However, IF you can get passed that, it’s a wonderful movie—just all together too much profanity for your average Christian to take, but if you can, it’s wondeful
My Ratings: Moral rating: Very Offensive / Moviemaking quality: 4½

Chris, age 30 (USA)
Negative
Negative—After watching the movie I recalled some mention of the word Nazi, yet with no reference to anti-Semitism. This troubles me since it minimizes the tragedy of the Holocaust era. At the present time, I believe there is a rise in antisemitic terror and also persecution against Christianity. The reason to me is obvious, it is because of the Jewish background of Jesus and his belief in Scripture as truth (John 10:35). My wife missed the references in the movie, and I admit I cannot remember them clearly, so if you know of them (any mention of Nazi or Hitler), please post or contact me.
My Ratings: Moral rating: Very Offensive / Moviemaking quality: 3