for thematic content involving drug addiction, and some language. 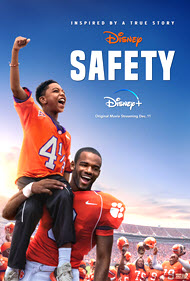 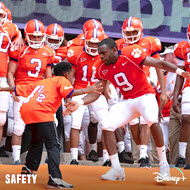 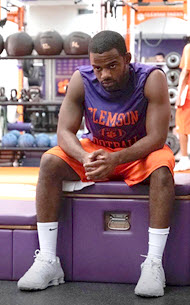 Caring for a younger brother 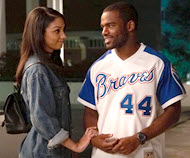 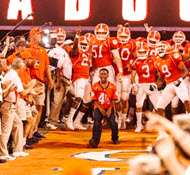 Based on a true story, Clemson freshman Ray McElrathbey (Jay Reeves) is starting a busy semester with 17 credits, a football scholarship, and trying to start a relationship with a kind-hearted sports reporter named Kaycee (Corinne Fox). However, Ray’s life is turned upside down when he finds out that his Mom has relapsed and has left his little brother Fahmarr (Thaddeus J. Mixson) living with a suspicious group of people.

Ray leaves college to get his brother, only to find out that their Mom has been accepted in a 30-day drug rehab program and that Fahmarr will be transferred to foster care. Ray decides to take Fahmarr into his care, and sneak him into his dorm room on campus. With the volunteering help of his team over time, Ray struggles with how he will handle the situation if it goes public. Will he be able to continue playing the sport he loves? Or will he have to sacrifice his career to give his brother the life he needs?

“Safety” is a Disney sports movie. Of course, with that in mind, the film is a sanitized examination of serious issues such as drug addiction, troubled families, as well as college life. That’s both a blessing and a slight drawback in some cases. This also leads to several predictable moments. However, at the same time, I felt like “Safety” did a really nice job of balancing the more mature, emotional elements with more lighthearted and humorous moments. Especially in the film’s third act, the intended emotional moments succeed in hitting the bullseye without going on for too long or being shortchanged. And the film’s end credits footage of the real Ray and Fahmarr are a nice touch (especially their Oprah interview).

The story moves at a pretty solid pace for 2 hours, and the actors do a fine job of portraying the honesty and complexity of the situations in play. I wouldn’t say there’s any Oscar-worthy performances in the cast, but they at least elevate the material to being inspirational and affecting. Reeves and Mixson show clear and convincing fraternal chemistry throughout the film as well. The film also has some very impressive cinematography, with some creative camerawork choices on and off the field.

“Safety” promotes the importance of community and helping each other out. Although Ray is going against NCAA conduct, his team and eventually his coaches do all they can to help. They help Ray and Fahmarr get an apartment outside school property. A coach’s wife offers to give Fahmarr rides to school. A church ministry comes to help Ray clean a cluttered basement.

Through the events of the film, Ray learns that he sometimes can’t do everything on his own. He sums this up at the end of the film by saying he learned to “open [his] heart and accept help.” This reflects the Biblical principle that we are to bear each other’s burdens.

“Bear one another’s burdens, and so fulfill the law of Christ. For if anyone thinks himself to be something, when he is nothing, he deceives himself.” —Galatians 6:2-3

In the meantime, Ray clearly loves his brother and eventually chooses to sacrifice his career to give him the stability he needs. He also shows love and concern for his struggling Mother (Amanda Warren).

Adult Content: Nothing really salacious. Some light flirting between Ray and Kaycee, and a romantic dinner is prepared for them at home. Fahmarr asks a girl to dance at school, and she rests her head on his shoulder (to the tune of “I Will Always Love You” by Whitney Houston). After the dance, Fahmarr innocently says, “she loves me.” Kaycee wears a midriff-baring top at one point.

Violence: Players are pummeled, tackled and hit sometimes a tad violently. Verbal threats are used also (“blood will be on your hands”, “who’s my next victim?!”). This is all pretty much expected for football teams, however. Fahmarr is accidentally hit against a wall while being transported in a bag.

Drugs/Alcohol: Addiction is discussed in a handful of scenes, and Ray eventually reveals his Mom is a “drug addict.” A college professor talks with his class about the effects of addiction in a quick scene. We hear about rehab programs and getting clean. However, there’s no specific drugs mentioned or seen. Fahmarr is intercepted by Ray at an apartment owned by a few suspicious individuals. It’s implied that they may be gangsters and/or drug dealers. Elsewhere, one scene early in the movie takes place at a college party. We see Red Solo cups, but we aren’t told what’s in them.

Other: Of course, Ray does lie and mislead about his secret at first. He also lashes out at Fahmarr a few times. Fahmarr, in the meantime, does not have the greatest behavior either. He breaks rules a few times and has “discipline reports” he needs his brother to sign. When starting at a new school, a teacher tells Ray that Fahmarr struggles with authority.

Someone at school is accused of helping because of Ray’s skin color—which is proven to not be the case.

From “Remember the Titans,” to “McFarland, USA” and “Queen of Katwe,” Disney has impressed with adapting true events into inspiring, family-friendly movies. And, in some ways, I’m happy that streaming services like Disney+ exist. It allows for even more projects to receive the attention that may not have been possible two decades ago. And even though I would have loved to have seen “Safety” on a big screen, I’m glad the streaming service is bringing in more true stories for families to watch together at home.

As far as content goes, families with younger children will probably need to be prepared for discussions about the struggles Ray and Fahmarr’s family have gone through. With a PG rating, however, the film does not go into serious detail about the issues at hand. Beyond that, language and adult content are restrained. As always, parents are encouraged to take the content issues into consideration before making a decision for their kids.

Overall though, “Safety” is a very effective movie with strong messages and a terrific story. It’s definitely a worthwhile watch for older kids and up.