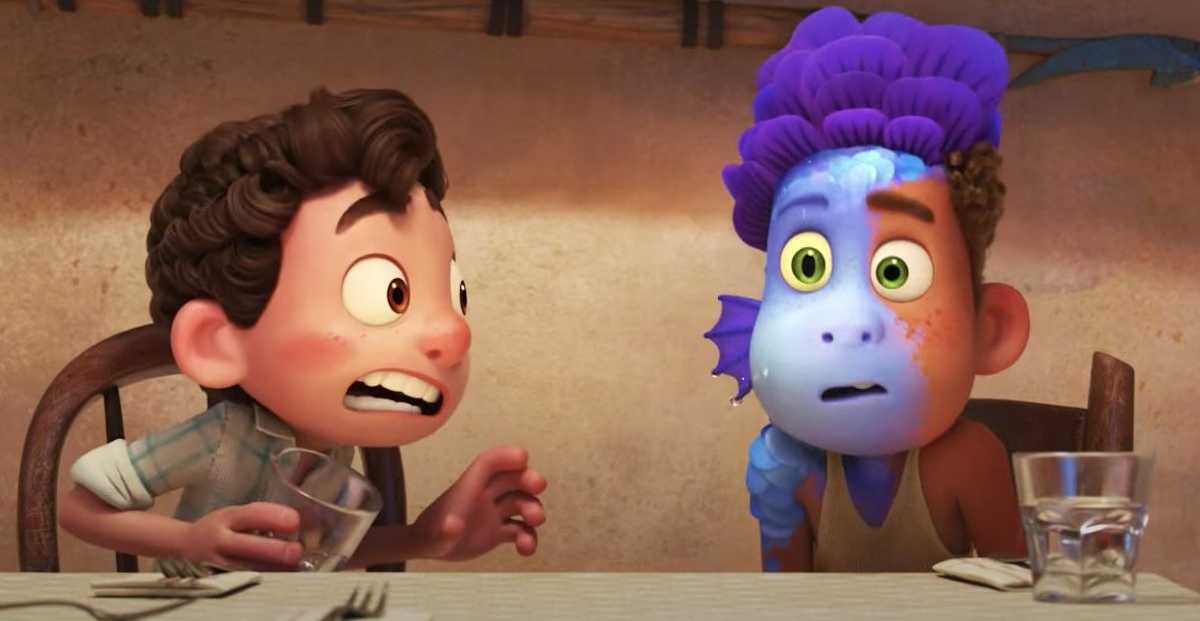 for rude humor, language, some thematic elements and brief violence. 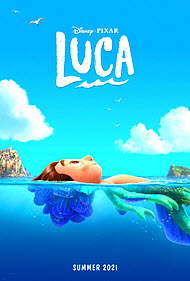 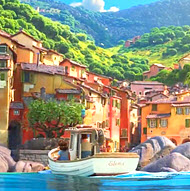 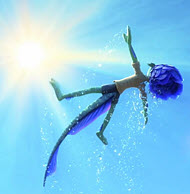 Being different than others 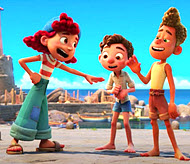 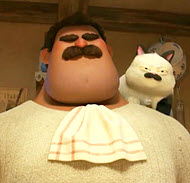 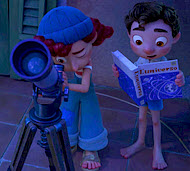 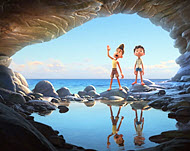 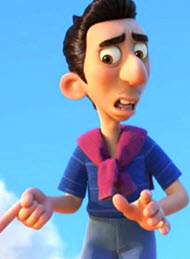 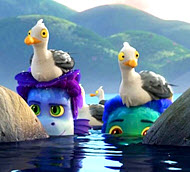 123-year old Luca (voice of Jacob Tremblay) is a young sea creature who yearns for a life bigger than the fisherding job he’s been doing. Not too different from a certain red-haired mermaid (wink wink), he finds treasures from the surface above and yearns to explore it against his parents’ wishes.

One day, Luca meets Alberto (voice of Jack Dylan Grazer), a fellow sea creature who invites him to explore the surface. Changing to human form on dry land, the two come across the human village of Portorosso, where they hope to get a Vespa and travel the world together.

After a run-in with some bullies, the two meet a young girl named Giulia (voice of Emma Berman), who wants to win the Portorosso Cup after an embarrassing result last year. If they win the cup, the boys will be able to buy their own Vespa… that’s if Luca’s parents don’t find him first… and they stay away from water… and if no one else finds out what they are.

“Luca” is a much simpler effort from Pixar, with a a fairly low-key story. However, despite a lack of sophistication and no strong antagonist per se, it still retains a genuine, charming, and heartfelt emotional undercurrent. The film’s last third, in particular, does a fantastic job of bringing the characters and the overall conflict full circle. The ending also goes in a slightly unexpected tearjerker of a direction.

The animation carries a unique vibe, mixing Disney/Pixar’s house style with touches of inspiration from Aardman and Hayao Miyazaki. The Italian riviera setting is very inviting and picturesque, with many great camera shots. The music score by Dan Romer does a nice job of mixing very nice orchestral themes with some Italian hints, as well as elevating the more emotional moments of the film.

At just 84 minutes without credits, “Luca” paces nicely while saving time to help develop its characters. The voice acting (Grazer and Jim Gaffigan are stand-outs) is solid across the board. The humor works in some areas also.

On the downside, the underwater home of Luca and his family isn’t really explored enough. Maybe one more scene to give more of an idea of where he came from would have been helpful.

The central theme of “Luca” is acceptance. And while it is a theme that has been explored in different contexts in different animated films throughout the past decade, this one carries an extra layer. When it comes to the eventual reveal of Luca and Alberto’s identities, their acceptance is based off of their personal character traits, not on their outside appearance. This is modeled at the end by Giuliana’s father. He starts off being an avid hunter of “anything that swims”. However, after getting to know Luca and Alberto and seeing the good friends they are to his daughter, he puts aside his prejudice and defends them.

For me, this came across to me as a very strong parallel to Samuel’s words in 1 Samuel 16, which clearly discusses the lens of how all should be treated regardless of their appearance

“Do not look at his appearance or at his physical stature, because I have refused him. For the Lord does not see as man sees; for man looks at the outward appearance, but the Lord looks at the heart.” —1 Samuel 16:7

The film also embraces the positive themes of individuality, true friendship, and the importance of loving, strong parents.

Language: No profanity, though someone says “oh… sharks!” and “mother of pearl!” in a way that’s meant to wink at something stronger. “Stupido,” “imbecile” and “idiot” are tossed about as insults.

Violence: Alberto and Luca do attempt a handful of dangerous stunts that usually involve close calls and falling from precarious heights into water. Some harpoons are used to try and kill from time to time, but never hit their intended targets. A cat attacks Luca and Alberto on a couple of occasions (we see scratches on their faces after one incident). Some other slapstick situations include falling, being hit, kicked, etc. A bully throws punches and tosses others aside. Giulia’s dad chops off the heads of fish. Someone mentions murder at one point.

Drugs/Alcohol: Wine is seen in one instance.

Other: Of course, the plot of the film is predicated on Luca and Alberto sneaking off and disobeying authority. They also lie and mislead others repeatedly. We see atrocious table manners, and hear brief jokes about body odor and throwing up. A couple of hurtful decisions are made. A parent apparently abandons his teenage son. Meanwhile, human characters show prejudice, fear and contempt towards sea creatures. And, sea creatures apparently have the ability to magically change form (but its’ left unexplained).

In over 25 years of creating feature films, Pixar Animation Studios has continued to create terrific films that feature well-developed, memorable characters and engaging, heartwarming stories. While “Luca” may be lighter in tone, focus and plot than a lot of the studio’s other efforts, I personally was glued and engaged from beginning to end. Director Enrico Casarosa infuses this particular effort with a distinct and beautiful visual palette, a charming premise, an authentic and children’s book-like setting, and sincere and heartfelt characters that deliver in the way only Pixar can.

Families will be happy to know that “Luca” is light on content concerns. Violence remains on the slapstick side, and there’s no crude humor, adult content, or really scary situations. Luca and Alberto’s disobedient choices might require a pre-movie conversation with kids. But other than that (and some name-calling), there’s little here that would be considered problematic. And, the film’s solid messages on genuine friendship and acceptance could lead to solid Biblical conversations as well.

In the end, “Luca” is a simple, colorful, sincere and memorable effort from Pixar, and it’s one I’m looking forward to watching again.

Positive
Positive—Just a follow up… I did just now, see the whole movie and it is adorable! It is about normal friendships and not a gay relationship! It is about not judging others and being accepting. The bully does not win, etc., I am so tired of some people ruining things for people by reading into them and finding their own agenda in them. Through the eyes of an innocent child there is nothing unusual about this whatsoever. My children laughed through everything—so cute and enjoyable. God wants us to live joyful lives, and I believe that we do not need to fear every article that says something is this or that.

Please form your own opinion on this and all things that children should see and not see. I think we need to preserve the innocence of childhood and not bombard children with topics that are not age appropriate but let’s not go so overboard that we sensor everything, even things that are harmless. We had a fun night with “Luca,” and we opted for ice cream cones instead of popcorn! Peace and blessings!
My Ratings: Moral rating: Good / Moviemaking quality: 5
Mary, age 51 (USA)
Positive—This was a very cute movie! Even my teens enjoyed watching it—which says a lot. It’s a great movie about friendship and perseverance. I recommend it!
My Ratings: Moral rating: Good / Moviemaking quality: 4½
Chrystal, age 44 (USA)
Negative
Negative—I wasn’t planning on commenting until I realized that no else had brought up these issues. I’ll make this short and down to the point.

1. The whole plot is Luca running away from his parents.

BOTTOM LINE: I see many problems with this, the main character runs away disobeys his parents and is rewarded in the end for it.

2. Many people have pointed out it secret LGBTQ “agenda”

Although the film never mentions LGBTQ themes in it, online people have made some strong parallels. The plot is that the two main characters are sea monsters that have to hide their identify because the town doesn&rsquott like sea monsters. People have pointed out that it could represent two boys who are Gay in an unaccepting town. People have even gone so far to say that the two boys are in a Gay relationship with each other. I did not realize this the first time I watched it, however when I saw online that people were making the connection I understood.

Will I leet my kids watch this?

I don’t ban any movies from my kids, unless they are rated R. If my kid comes home and wants to watch “Luca” for some reason, I will explain to him that it isn’t Christian friendly and discuss it with him.
My Ratings: Moral rating: Very Offensive / Moviemaking quality: 4
Amelia, age 22 (USA)