for some rude humor and action. 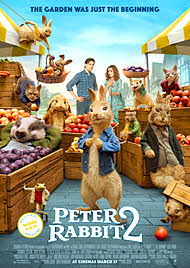 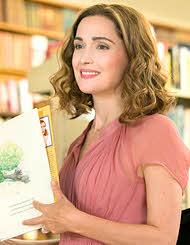 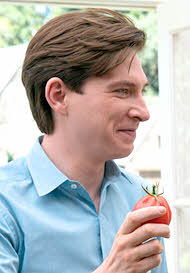 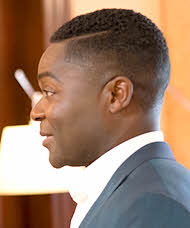 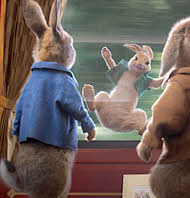 Being labeled as a particular personality type 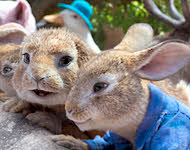 “It’s not hard to sell a lie to someone who wants to believe in it.” 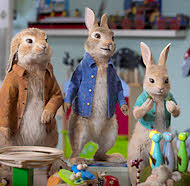 Importance of doing the right things

Helping those in trouble

Importance of forgiveness / forgiving others

Growing up in an orphanage

“The garden was small potatoes”

It seems as if “Peter Rabbit 2: the Runaway” has been a long time in coming, with many release date changes. It’s finally here, and picks up the story not long after the ending of the original. The animals now live in harmony with the humans, sharing their garden and providing inspiration to Bea for her charming stories and illustrations. Bea (Rose Byrne) and Thomas McGregor (Domhnall Gleeson) are getting married and have even included Peter (James Corden) and the other rabbits in the ceremony as part of their “family.”

All should seem well, but Peter bristles against the thought of Mr. McGregor becoming his father, while the talk of future human babies creates anxiety in the animals which already consider themselves to be the McGregor children. There is some angst with the newly married couple as well. Bea continues to defend Peter’s mischievousness as being a normal aspect of youth, but because of past experience with Peter and a series of misunderstandings, Thomas can only see his behavior as sheer naughtiness. Tension escalates when a successful publisher promises to make Bea’s series of sweet, moralistic animal tales into a raging success.

This movie deeply explores the idea of being misunderstood and seeking acceptance. Bea wants desperately to share her love for the animals and their beautiful countryside with the world; Thomas hopes to be a good dad despite never having had one, and Peter wants to be seen as more than just “a naughty bunny” as he matures. Each of these are noble goals, and each of these characters are put to the test. How far will each one go to be accepted?

This is an unusually self-aware film, often poking fun at the very plot points which move it forward. Although much of this humor will be beyond the grasp of the younger audience, there is plenty here to keep children engaged with the story and characters. After a relatively slow build, the movie progresses into zany action-driven sequences with nods toward the heist-film genera. There is much slapstick cartoon violence here, similar to the first film, but perhaps toned down just a bit. There are some moments which are quite funny, some which are moving and heartfelt, and others that are just a little dark.

The slapstick violence is probably the biggest concern for impressionable viewers. Humans are smacked, knocked down, hit, sprayed, tripped, and more. Animal characters are captured, chased, caged and mishandled. It is implied that some are going to be used for food or experimentation before being rescued. One tense scene seems to imply that Peter must hurt someone to be initiated into a group.

Much of the plot centers around animals stealing from humans. Attempts are made to justify this. There is an elaborate heist-style robbery. Several new characters are very bad examples to Peter and his friends, leading them astray.

Human characters lie to impress someone. A charming man seems to be wooing a married woman. A couple lies to each other, argue and are in discord. Animals are treated as if they are human members of a family, with the implication that a human can be a “father” to a rabbit.

When Benjamin misunderstands and thinks that Peter has found a love interest, he is not concerned when he discovers that this supposed love interest could be male (but does disapprove when he hears that the new friend is a thief). One man comments that another male has “eyes you could get lost in for hours.”

Cottontail discovers sugar in the form of jelly beans, and it is implied that she becomes “addicted” to them. Some may think this is making light of drug dependence, but I took it as her just discovering the effects of a sugar rush.

There is some very light rude humor, but much less than the original. Characters are modestly dressed and there is no sexual content or inappropriate language.

“Peter Rabbit 2” is visually appealing, humorous and entertaining. I personally did not enjoy it as much as the original, but it can be recommended for family viewing for those who found the first film acceptable. Best of all, it may prompt good discussions about how attempts to impress others can lead to compromised ethics. Thankfully, both humans and animals learn from their mistakes. There is an important message here about the desire to be accepted and how behavior can follow expectations. When everyone expects Peter to be naughty, he finally gives up on being good and embraces naughtiness, leading to unfortunate consequences.

Our words have great influence over others. The Bible says in Proverbs 18:21 that “death and life are in the power of the tongue.” When we say that someone is worthless, they may come to feel worthless. At one point Peter says, “If I am supposed to be bad, I guess I’ll be bad.” The negative words spoken over Peter come to influence his decisions and character. Likewise, the flattering affirmation he finds in the city animals hold great sway over him and encourage him to do things he knows are wrong.

Similarly, flattery and promises lead human characters to act out of their normal character in this film. Proverbs 26:28 says that a “flattering mouth works ruin.” So much grief and trouble can be avoided if one does not heed the words of a flatterer! Look at how sin came into our world… through the deceitful words of the ultimate flatterer, Satan (Genesis 3). One character in the movie says that it is “not hard to lie to someone who wants to believe.” Peter and the other characters want to believe that they are accepted, important and needed… but they seek this affirmation in the wrong way.

It is refreshing to see this valuable truth so clearly examined in a film, with characters even acknowledging how they had been led astray by someone who appealed to their desire for acceptance. Instead, characters eventually find the love and acceptance they desire in the unusual blended “family” they already have.

Positive
Positive—This is one of the best movies I have seen in years! It was such a treat to go back and see a movie in a real theatre after everything with COVID-19, and this movie was delightful and wonderfully made. As a major fan of the stage musical, I felt that it stayed very true to form while still being something new. There are about 2 sexual references that may not be appropriate for children, and a bit of language, but nothing too offensive. I found it very enjoyable, and I would say that it is appropriate for children 12 and up for sure.
My Ratings: Moral rating: Better than Average / Moviemaking quality: 5
Olivia, age 27 (USA)
Neutral—I saw this with my parents and my teen children. All of us enjoyed the movie, mostly because it’s the first movie we’ve been able to watch since the pandemic started. I thought the first Peter Rabbit was better than the second, but my mother disagreed. There is one comment that teens and adults will pick up as LGBTQ, but young children will not notice it. Overall, it was a cute diversion from real life.
My Ratings: Moral rating: Better than Average / Moviemaking quality: 3
Chrystal, age 44 (USA)
Negative
Negative—There is a part where Peter is explaining that he met someone that will change his life. Peters cousin is excited and thinks it’s a girl. He explains his name is Bernard I think (it was a boys name) and the cousin said that’s great! And then Peter says he was his dads friend and the cousin replies that he doesn’t have his blessing to kiss him then. Obviously a LGBTQ agenda. Otherwise the movie was good but you have to be careful with these slight of hand comments to promote wickedness.
My Ratings: Moral rating: Average / Moviemaking quality: 5
Lori, age 36 (USA)