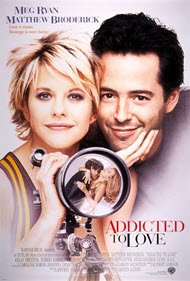 What do you do when your true love betrays your trust and ditches you for another? How do you handle being dumped by your fiance’?

“Addicted to Love” portrays how Sam (Matthew Broderick) and Maggie (Meg Ryan) react to this situation. Sam’s lifelong love, Linda, has dumped him for suave French restaurateur Anton, who is Maggie’s ex-fiance. Sensitive, gentle Sam determines to win his girlfriend back. He puts his life on hold and camps out in an empty building across from the apartment where Linda and Anton share passionate, immoral intimacy. Sam rigs up a camera obscura, a method of projecting the view of Anton’s apartment onto a wall of his hideout. Ever optimistic and devoted, he uses the projected image of his girlfriend’s movements to fantasize that he still has his relationship with her. He plans to wait faithfully for the day when Linda and Anton break up, so that he can try to win her affection once again.

In stark contrast to Sam’s undying devotion, Maggie wants revenge on Anton. She is cold, calculating, and ruthless in her plans to ruin her ex-lover. She barges in on Sam’s surveillance hideout, and soon entices him to join her in wreaking havoc in the lives of Linda and Anton.

Although there are a few laughs in “Addicted to Love”, this film has no sparkle, no magic. It falls far short of such romantic comedy treasures as “Sleepless in Seattle” and “While You Were Sleeping”. Sam is likable enough, with his puppy-dog eyes and tender heart, but Maggie is so abrasive that it’s difficult to cheer when romance blossoms between them.

This film is properly rated R; it is not for young teens. It includes a gratuitous scene of male nudity and implied oral sex, multiple occasions of implied premarital sex (you know, that out-dated little sin that the Bible calls “fornication”), and perhaps a dozen instances of profanity.

More significantly, “Addicted to Love” presents an amoral worldview—an acceptance and tolerance for wrong behavior. This film draws the viewer to identify with and approve of a protagonist who seems to be without scruples. Maggie is self-centered, vengeful, insulting, foul-mouthed, and unkempt. She steals from both Sam and Anton. She is cruel—smearing strawberries on Anton’s pillow, knowing that his allergy to strawberries will produce an itchy rash on his face and chest. Is it okay to behave like this? Do you want to hold up this level of heartlessness as acceptable? Maggie’s actions are wrong, but the movie has not one breath of criticism for her actions, and not a single negative consequence for the illegal, deceptive, and damaging acts she has done. She softens a little at the end—but it is just a little. Maggie is certainly no role model for your teenaged daughter, although the movie basically presents her as one.

All in all, this film is passably entertaining, but it glorifies revenge—not a Godly message by any means.

This review was very well done, and did not leave out one area that we should be aware of. What a sadistic, angry, feel-bad movie. Meg was not the least bit “cute”, and I was not entertained. When will Hollywood see that everyone is waiting for them to bring some pure enjoyment, like “While You Were Sleeping”? Even the world is tired of offensiveness and is longing for goodness… I feel weary wishing just one (or more) unnecessary bad scenes had been deleted in every movie. So sad, and they are missing out on greater success!

NMac, age 43
This movie was a mess. I expected romance. I saw garbage. There’s a word for what Sam and Maggie did in this movie… STALKING! And Gene Siskel calls this a great date movie. PLEASE! Save your money and wait for Julia Roberts in “My Best Friend’s Wedding.” Once again, a mess-spiritually and carnally. It’s gonna take Christian writers and directors to create romantic films that are heart-touching and glorifying to God at the same time.

Chris Utley, age 24
Although this movies was, as the reviewer put it, entertaining, there was far too much raunchy sexual humor that polluted it. This is not a movie that Jesus would have enjoyed. It threw His exhortation to forgive and forget (70 x 7) out the window and glorified behavior that is contrary to Christian principles.