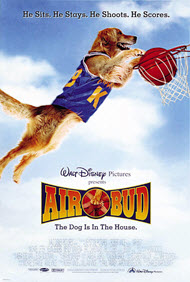 At the time of this review, the Disney corporation is reeling from a growing boycott of their movies, amusement parks, stores, toys, cable TV channel, cruise line, etc. To their surprise, it’s not just Christians who are withholding their hard earned cash. Millions from a variety of faiths and various secular organizations have joined the boycott, frustrated by the degraded Disney of CEO Michael Eisner. The greenback-clutching throng say that they are no longer willing to fund this entertainment giant’s increasing glorification of homosexuality, profanity, unmarried sex, spiritism and bloody violence.

But wait! To Disney’s credit, the story of “Air Bud” stands as a good example of the type of movie that families expect from their former friend. Here you will find the very character traits that parents worldwide long to see reinforced on the movie screens and television sets of their neighborhoods and homes. Humility, self-sacrifice, honor, family love, and more. Though not perfect, “Air Bud” is a movie worthy of the support of all who embrace the values which this story supports.

In this live-action family comedy, set near the picturesque mountain ranges of the northwestern United States, twelve-year-old Josh Framm, his widowed mother and little sister have moved. A new house in a new city. It’s time to “get on with life” a year after the tragic death of Josh’s father, a test pilot.

Josh was close to his dad and the loss is still painful, especially as he struggles to fit in at his new school. A bit shy, he is an unknown new kid in a sometimes unfriendly environment. Fortunately, the mother/son relationship is good, and young Josh finds a true-blue friend in the form of a stray dog, Buddy.

After accepting the position of “manager” (sweaty towel washer) of the school basketball team, Josh soon discovers an overgrown basketball court hidden behind a dilapidated old country church. It is here that he also discovers and befriends a dog with an unknown past, and an amazing talent.

This film was actually written specifically to capitalize on the talent of the K-9 co-star. In one of late night TV’s most popular recurring comedy spoofs (David Letterman’s “Dumb Pet Tricks”) “Buddy” the golden retriever was discovered. This dog can shoot and score with basketballs! Because it won’t take too much to ruin the formula story of this kid-pleasing movie, I won’t go into the plot. But I will commend the writers, and Disney itself, for avoiding any allusion to sex or violence. They took a chance by writing the attractive widow/mother as a caring single mom devoted to her two children, not juggling some illicit romance on the side.

Yes, the script does take some zany turns, but the youngsters who are the intended audience won’t even realize that much of what befalls the villain (a dog-abusing clown) is impossible. Just eat your popcorn, sip your soda, and enjoy the smiles on your kids' faces.

Please note that our “Moral Rating” is a 3½, not a 5.0. Marred by the inclusion of unresolved “situation ethics” (the philosophy that says it’s okay to steal or commit some other sin if doing so accomplishes a “greater good”) and a few curse words (“hell” is mumbled 3 times, plus “God” and “Oh my God” are used 1x each as exclamations), “Air Bud” is not perfect, but it is still a film that most ages can enjoy.

If you’ve been longing for more movies to which you can take your children, see this one. Take your kids, take your neighbor’s kids, take the grandparents… go see it. After all, strong support of good movies and consistent refusal to attend the morally reprehensible ones is the best way to assure that those who run the entertainment industry will have the incentive necessary to continue to invest in family-friendly features.

Boycotting movies like “Air Bud” is, in this reviewer’s opinion, akin to shooting yourself in the foot.

I went to see this movie with my wife and 2½ year old daughter and we enjoyed it. I must admit, I even got a little teary eyed at times. Younger children may find the conflicts between the clown and the boy a little distressing, as my daughter did. May I say that we did miss the first 20 to 30 minutes of the movie, so my views only relect the last 70 minutes or so of the movie. I can’t recall anything that was overtly offensive. It was quite enjoyable.

Keith Davis, age 29
Air Bud was a good movie although the dog doesn’t play basketball as much as you’d think he does. Some ideas like a father test pilot and a janitor who used to play for the New York Knicks are hard to believe.

Ben Zoller, age 12
I have not gone to see this film yet but plan to very soon. I am one Christian who refuses to boycott Disney. Boycotting them would make me a hypocrite. Why? If I boycott one film studio than I boycott them all. I strongly urge Christians to stop the boycott and this legalistic attitude. If I were a non-Christian the things I see would turn me into an even worse pagen. Instead of boycotting… use discernment. Will the film cause you or another family member to stumble? That is a better attitude to have. We have no right to judge. Only God does and he will effectively judge Disney, et al in the end. To those boycotting Disney. I have a question—why? Why not boycott Fox (which by the way is a SISTER company to Zondervan Publishing that put out the NIV Study Bible—that’s a scary one—yet they produce Married with Children, The Simpsons, et al). Of course check out who owns most Christian publishing and record companies—the same people who bring you this OFFENSIVE entertainment. Hmmmm. Or there is Paramount. They’ve put out excellent films but our a subsidiary of Viacom (owners of MTV—home of Beavis and his friend, Showtime—adult films nightly, et al). Just want to stir some thought. I will be watching Air Bud. I will not be boycotting anyone.

Brian McClimans, age 22
Air Bud was entertaining, and about as wholesome as you can get these days. I liked the story because it showed a young boy who has to persevere and work hard to make new friends and to overcome obstacles. And it is done in a setting where there is no swearing, no illicit sex, and no violence. The only negative which I don’t hope kids don’t pick up on, is the notion that the ends justifies the means, as in the less than legal way that the boy takes the dog away from its technical owner. I heard on the news that the reason that Disney is not spending more money to promote this movie, is because the dog had a leg amputated following the making of the movie, thereby preventing Disney from capitalizing on the movie in the normal manner with related products, appearances, etc.

Dave, age 52
We took our 6 year old to see this movie and he thoroughly enjoyed it. It just goes to show you that Disney can put out quality family films if they want to. With Christians boycotting Disney, the profits on this one will probably be low, which will insure that we won’t see many more like this.

Lila White, age 44
It was a good wholesome movie, but was unable to keep my attention the whole time. There were several instances that were very boring. I recommend this movie to elementary age kids.

K Strine, age 13
This is the first movie in two years that we took our grandchildren to see and came away satisfied that no harmful lessons were being taught. We took our 6 year old granddaughter and she thoroughly enjoyed it.

Gary Knox, age 57
This is a GREAT film for the family! While the father figure is deceased, it is obvious via flashbacks that he and his son were very close, and that his son deeply misses his dad. That’s quite a positive statement about the validity and importance of fathers.

Ron Hyatt, age 43
When I saw this movie, there weren’t very many people in the theater and it was the second day it was out. It’s a shame that more people are drawn to the violent movies instead of the good family films like this one. Pretty soon, we’re going to see less of these kind of movies and more of the violent ones because Hollywood is going to think it’s not worth it to make family films. I enjoyed this movie and would recomend it to anyone. This is one of those films where you leave the theater feeling good. There isn’t bad language at all and, although the ending was kind of weak, it was very enjoyable!