Today’s Prayer Focus
As Good As It Gets
MPA Rating:

on appeal for strong language, thematic elements, nudity and a beating 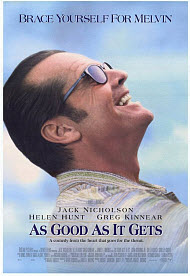 This is a very enjoyable movie whose complex characters were played out convincingly by the actors. In addition, the movie boasts a witty script with a generous serving of catchy one-liners, although on several occasions realism is sacrificed for laughs.

The movie revolves around the obsessive-compulsive Melvin Udall (Jack Nicholson), who begins to triumph over this mental illness and his callousness, thanks to an unexpected promise of romance with a peppy waitress-and-hard-working-mom named Carol (Helen Hunt) and the misfortune of a gay neighbor named Simon (Greg Kinnear). I can’t leave out Simon’s tiny shaggy dog for it too plays a role in Melvin’s difficult but apparently winnable struggle with his abrasive and despicable demeanor. While the complexity of the characters is delightful, sometimes I wonder if the movie confuses between Melvin’s deeply held convictions and the crass remarks he tactlessly makes partly due to his mental condition. I also wonder if Melvin’s character transformation is too much too soon as to let him share his apartment with Simon, since Melvin makes it emphatically clear early in the movie that his gay neighbor is not welcome at his doorstep.

Yes, there are elements in the movie that somewhat unsettle me. There is the assumption that sex is to be expected in either a casual date or a blossoming romance outside of marriage. Thankfully, there are moments when this notion is neutralized—no actual sex happens in the story and, at one point, something other than sex is stated as “better” between an unmarried man and woman. Then there is also a woman in the apartment whose lips utter “prayer” and “God” and some other sentimental goodness but is unwilling to extend a simple act of kindness to her crime-befallen neighbor. Lastly, I’m ambivalent about whether Simon’s “gayness” is necessary in the movie. Now this movie is far from gay propaganda. If a lesson one can draw from Melvin’s actions toward Simon is that we don’t have to agree with someone’s lifestyle in order to show love to them, then I withdraw any lingering objections on my part.

“As Good As It Gets” was originally rated “R” but later downgraded to “PG-13”. It includes about three “f” words and a smattering of other offensive language. Carol (Hunt) is seen posing nude for Simon (though no full nudity is revealed). She is also shown in one rainy scene wearing nothing under her wet t-shirt, leaving nothing to the imagination. The Lord’s name is taken in vain several times as well. And, lastly, sexual dialog is present in several instances.

This is a witty and enjoyable movie for adults who can overlook the precautionary comments listed above. However, be aware that this is not a family movie and one you will certainly not want to take youth to see.

Negative—Although the script was witty, I was disgusted and disturbed by this movie. The movie is basically about a man suffering from a obsessive-compulsive disorder and his friendships with a waitress and a homosexual man. One of the first scenes is a man fondling Carol’s (Helen Hunt) breasts. Later, we see the back of Carol’s body as she poses nude. There are also some racist jokes. I was disturbed at the way this movie portrayed sex and homosexuality. It seems to suggest that it (sex) is a means to the end, it is all that is needed to make a peron’s life happy. It shows teens that one must desire sex, and that adult relationships must revolve around sex. The only thing I learned was the behavior of people suffering from obsessive-compulsive disorder. One doesn’t need to watch a movie to learn this.

Esther Krushnisky, age 17
Positive—“As Good As It Gets” is a very good movie with great performances by all cast members. Nicholson gives a 2 hour acting lesson as every gesture and expression has a meaning, and Helen Hunt holds her own very well, and is very deserving of her Best Actress Award. Morally the movie has some shining moments and some trashy spots, but perhaps the most interesting is its treatment of homosexuals. It did not seem to me to be pushing an agenda like most movies with gays do nowadays. It seemed neither condemning nor ultra-supportive. If anything it gave me a compassion for homosexuals and to see them come to Jesus, and to be delivered of their problem.

I recommend this movie to adults wanting to see great acting, and a unique and quirky love story.

Todd Skinner, age 19
I have seen this movie yesterday and I enjoyed most of the complex character interaction. I think the fellow who reviewed this movie did an excellent job. I specifically like when he said, “we do not have to agree with another person’s life style in order to love them.” So often the Christian community is very quick to condemn, but slow to love. This blows my mind because the Bible says that “All have sinned and fall short of the glory of God.” But praise be to God that the Born again believer in Jesus Christ can go to the almighty creator and ask for forgiveness, I John 1:9. I now take the view that I am in fact a forgiving sinner. I used to hate when someone was acting gay in a movie. I found out a few months ago that my sister was living the gay life style; needless to say I did not handle this situation in a very Christian manner. Now I am able to separate the sin from the sinner. Like God, I love my sister, but I hate the life style that she is choosing to live. I would ask for your prayers for her.

Harry Fiegert
Melvin’s “mental condition” is Obsessive Compulsive Disorder, which makes him a virtual “slave” to his anxieties, and the repetitious actions they involve. It is NOT an aspect of OCD to be mean or make “crass remarks.” Indeed, a more typical picture of a person with OCD is a “people pleaser”—but his character trait is also not part of the obsessive compulsive disorder. Please pray for those with this disorder—it can be a “living hell.”

Nayano in South Australia
Witty dialogue and great acting make me think this one will garner some Oscar nominations, but as is almost always the case in Hollywood, this movie is antithetical to a Christian worldview. The entire theme of this picture, as well as the title, point to a rather hopeless view of life—Jack Nicholson’s character Melvin, at one point despairing (because he wants to cure himself of his obsessive/compulsive disorder so that he can have a relationship with the Helen Hunt character), asks a waiting room full of psychiatric patients—“What if this is as good as it gets?”

The implication of this film, and its “happy” ending, is that yes, this IS as good as it gets—so find yourself and your happiness now while you can. Homosexuality is portrayed in a warm and fuzzy way. The homosexual character played by Greg Kinnear (Simon) is extremely appealing as a person. Interestingly, the thing that most riles Hunt’s character is that Melvin at one point says he was half-hoping she’d sleep with Simon in order to help him out of his “gayness”.

This is seen as a grievous offense, rather than as a misguided but softhearted attempt to make things easier for poor Simon, on whom Melvin has by now taken some pity. Nude paintings (of Simon’s mother, painted by Simon, so it’s particularly distasteful), a casual attitude about sex and the casual use of the F-word make this a less-than-great way to spend your cinema dollar. And it’s NO place for kids.

Diane Schrader, age 37
Negative—That Greg Kinnear character was really half-baked. His mother posed nude for him when he was a kid? (Yeah, right.) He trusts art dealers to bring in street hustlers to his door (i.e., Skeet Ulrich, directly ripping-off the Will Smith part in “Six Degrees of Separation”)?

He can afford a posh New York City apartment but not health insurance? And, he goes all the way to Baltimore to see his parents, only to turn around and go home? Please.

Brian, age 24
Neutral—In my personal opinion, this movie’s storyline is very, very poor. It’s unrealistic and uneven, so much that sometimes it doesn’t make much sense. And the characters, they do the dumbest things—although I will say that the acting is superb. It is sweet to see how Melvin gradually comes out of his mean ways, but you can find that element in tons of other movies that are way better. The quality of this movie is nowhere near as good it can get. But that’s just all my personal opinion.
My Ratings: Moral rating: Offensive / Moviemaking quality: 1