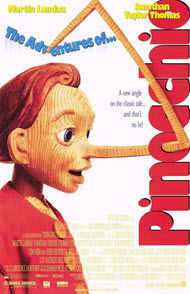 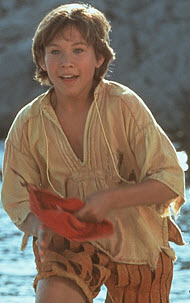 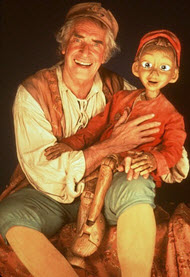 Jim Henson’s puppetry experts bring a classic family story to life in this live-action version of the story of Pinocchio. Although the 1940 Disney version of this tale is more light-hearted, musical and fun, this modern version renders the story in a way that is more tender and poignant—and truer to the original 1881 Carlo Collodi story. Most kids will enjoy “The Adventures of Pinocchio”, especially those 7 to 11. It is a funny, clever and sweet fantasy with somewhat sad, slightly disturbing undertones.

This family oriented film combines animatronic puppetry and computer animation with live action filmed principally in the Czech Republic. Adults will appreciate the scenery and visually graceful photography. Most teens and adults will not find the story very exciting, but the way it is told may be poignant enough to bring a little tear to some eyes. The story is set in the 1800s and includes richly costumed scenes. The very lonely woodcarver, Geppato, makes a wooden boy (a marionette) which magically comes to life. The boy, Pinocchio, soon wishes he could be a real, live boy and truly become Geppato’s son. In the end, after Pinocchio learns the importance of love, honesty and obedience, his wish comes true.

The animation of Pinocchio’s facial expressions and body is quite remarkable. The filmmakers have given this lovable, innocent little character a very cute and endearing face. Audiences will particularly enjoy the scene where Pinocchio’s nose grows to enormous lengths as he is caught lying. Contrary to the impression one may have gotten from advertisements for this film, star Jonathan Taylor Thomas is seen very little on-screen, only appearing at the very end. His main contribution is as the voice of Pinocchio. Actors Martin Landau and Genevieve Bujold do a fine job in their roles of Geppato and his life-long love Leona.

The story emphasizes the supreme importance of love and truth, the importance of being devoted to those we love, and the folly of living a sinful life. These are all important Christian themes. It is doubtful whether the moral of this film will have much effect on youngsters, but perhaps with an appropriate discussion afterwards… it might.

“The Adventures of Pinocchio” contains no foul language, no sex, and little violence. Some of the characters look rather bizarre and menacing. There is more exposure of female bosoms than most parents would like. Evidently the “Miracle Bra” was all the rage in 1881, as evidenced by two female characters who strongly bare their abundant cleavages. The story is, of course, based on a few magical events, but there is little or no occultic connection drawn in the film. The events are portrayed simply as miraculous things that happened due to great love. Although none of the darker scenes gets very intense, some may slightly disturb little children (a fire in the puppet theater, a scene where boys are turned to donkeys, a villain briefly shown turning into a monster, and a sequence inside the slimy stomach of a monstrous whale).

The message is positive and the story generally inoffensive, but I would not recommend it for preschoolers and kindergartners. Most kids in the 7-11 range will find such movies as “Toy Story” more fun and exciting. A computer-animated cricket, Pepe, was added to the film to lighten things up, but the humor doesn’t quite work. Older kids may particularly find “The Adventures of Pinocchio” a bit slow and a little old-fashioned in style.

…This was originally a morality tale about the dangers of disobedience. I saw the movie… and found that it was about… nothing, really! Everything that happens to Pinocchio is portrayed as simple misfortune—unfortunate things that have happened to a poor little puppet boy. Giupetto’s deep love and devotion to the boy has been changed in the movie to an uncertain fear of commitment, which he overcomes in the end—and apparently overcoming that fear is what turns Pinocchio into a real boy?

No, actually, it might be the fact that he cried a tear, which is brought out in the schoolroom scene as the ultimate evidence of real humanity. So he cries the tear, and now he’s a real human… but how did he get to be a real human on the inside, so he could cry that tear? We have no idea. This movie is another example of Hollywood’s mutilation of beautiful, meaningful, classic children’s stories—and should not be supported by our dollars.

Lori Ventola, age 35
It’s a movie about the mysteries of love, “based” on the old story, not depicting it. The same “love” which causes a 40 year old log to seemingly fall into the woodcarver’s wagon is what moves Pinnocchio to try to find and save his “father.” Fearing he’s lost his father, the “love” causes the tear, a most human emotion. It’s what also brings Gepeto and the Bujold character together and, probably, what saves Lampwick from eternal damnation as a donkey! Isn’t there an oblique Christian message here of the redemption of love? Isn’t Pepe the omnipresent conscience of Pinnochio? By the way, my seven year old found the scariest scene that where the boys turn to donkeys…