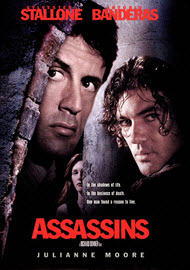 Sylvester Stallone and Antonio Banderas are two hitmen pitted against each other in Assassins.

Sylvester Stallone is Robert Rath, the uncontested number one hitman in the world after personally finishing off his former rival fifteen years ago, a Russian named Nicolai. While he violates a good amount of the ten commandments (especially the “thou shall not kill” one), Rath is seemingly a hitman with values… he has compassion for the innocent and manners with beautiful women like Electra (Julianne Moore) who enters his life as a target he is set to kill. But when a mysterious someone tries to steal a hit from Rath (Miguel Bain—Antonio Banderas), he begins to suspect that something is awry. Indeed it is, for he is now the target in a game that replays history from fifteen years in the past.

Bain is a younger, leaner, and meaner version of Rath. While he is Rath’s biggest fan—having devoted much time to study every past move of his and learn as much as possible on the strategies Rath uses—he will stop at nothing to become the best in the world. Of course, killing Rath is top on his priority list so as to become numero uno.

“Assassins”, directed by Richard Donner of “Lethal Weapon” fame, is heavy on the violence (to be expected), normal for its genre in profanity and bad language, and overall not redeeming in its worldview. On the positive side, there is plenty of action and a good story to back it up—without any skin or sexual situations added to appeal to the flesh.