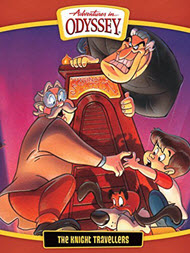 Where your treasures are, there your heart will be also.

The young boy, Dylan Taylor, thought he didn’t have a lot of material possessions. At the beginning of this movie, he gets into an argument with his sister about which toys are his (they are perusing a toy catalog). Thankfully, his father brings him a Biblical lesson about where his treasures really are or should be stored. Unfortunately, a lesson sometimes needs to be experienced first-hand before it is taken to heart. Therein, lies the story… “The Knight Travellers”!

A theft! Someone has stolen Whit’s Imagination Station! But why would anyone do that? It is an innocent invention that will allow people to experience past historic events through their imagination.

The inventor is John Avery Whittaker also known as “Whit.” The thief is an evil, self-serving fellow named Faustus. With his henchmen, he plans to turn the Imagination Station into the Manipulation Station! This is definitely not a good thing. So, the recovery of Imagination Station is of utmost importance. This adventurous video will take you through some daring events, even a medieval joust! The action will be sure to please all viewers.

Focus on the Family Films does a nice job presenting a Godly movie that is not boring. The animation is nicely done (not “Veggie Tale” quality though). Whit even prays with his team before going into a potentially dangerous situation. Dylan learns the valuable lesson about where his treasure is. However, really young viewers may be frightened in spots as suspense rises. Plus, Faustus has a pet boa constrictor that is a bit scary.

It is surprising how far away Dylan can get from his house without his parents noticing or caring to search for him. I wonder if he makes this a habit!? We will see, in episode 2!