Doc: An Interview with the Producers

“Doc” is one of those rare shows that entire families often enjoy together. Approaching its third year of broadcast, “Doc” resonates with millions of viewers who love the drama and uplifting morality displayed in each episode. If you haven't had the pleasure of catching this terrific show yet, we suggest you set aside some time to check it out.

We trust you will enjoy this special exclusive interview that Christian Spotlight brings to you from the Producers of “Doc”. If you are not familiar with the show, please visit our “Doc” ratings & review page.

Can you give us a brief idea of how the storyline for “Doc” came about?

We wanted to do a show with good family values that, first and foremost, would entertain the audience with what we call "the three H's"—Heart, Humor and Honesty. We also wanted a lead character who, as part of the fabric of his life, lives his life as a God honoring man. PAX is a network who's mission statement also reflects these values, so it was an ideal fit. As for the fish out of water, "Montana country doctor in New York" aspect of the show—Clint Cassidy is a guy who very much reflects our Christian values and our outlook on life.

How did Billy Ray Cyrus of "Achy Breaky Heart" fame get chosen to act as Doc Cassidy?

We were auditioning actors for the role of "Clint Cassidy" when our casting director said Billy Ray Cyrus had read the script and was interested in auditioning for the part. Would we meet with him? We said he wasn't really what we had in mind, but certainly we'd meet him. Ten minutes into the meeting, it was obvious to us that Billy was a Christian and it was obvious to him that we were Christians, and we all felt that we were brought together for the purpose of doing something that could be very special. As they say, the rest is history. Now, we can't imagine anyone else playing the part.

What kind of personal faith in God does Cyrus display "in real life?"

Billy is a very positive influence and witness for Christ in his dealings with others. On numerous occasions, I have seen him gather all the cast and crew on the set and start the day with a prayer. Unfortunately, that's not something people in this business see on a regular basis, but I've seen the positive effect it has on many of them.

“Doc” is one of the select few shows currently in production which Christians and others concerned with morality seem to approve of consistently. What kind of response have you been hearing from “Doc” fans?

The positive response to “Doc” has been overwhelming from both Christian and secular audiences. Fans of “Doc” say they are thrilled to see a program that espouses good moral values, shows that actions have consequences and consistently delivers a positive, hopeful message, rather than the cynical "anything goes" approach that we see way too often on TV and in theaters today.

How do you account for the surprising popularity of “Doc”?

To us, the popularity of “Doc” isn't surprising at all. We grew up in a small town in Iowa, so we know what “Americana” is like and we know what they like. We also know that, contrary to popular belief in Hollywood, there are millions of people out there who want a show the whole family can watch—and enjoy—together. There aren't many of those shows anymore. We knew there was a large audience that would embrace that kind of show—as long as it was done well—and “Doc” is proof of that.

What episode seems to be an overwhelming favorite of viewers and why?

It seem that every individual episode is somebody's favorite for one reason or another. Steven Curtis Chapman guest-starred in one episode, called “Fearless” as a music teacher who discovers he has Lou Gherig's disease—that's got to be one of the favorites. The special 2-hour “Some Gave All” episode, inspired by Billy Ray's song of the same name is certainly a favorite. That is the episode we were actually shooting on September 11 of last year. It honors not only service men and women from all of our wars, but also the policemen and firefighters who lost their lives on that day.

Recent favorites are “Time Flies” about Nurse Nancy's mother dying, which features a song off Billy's new soon-to-be-released CD, and “Complicated”, which is the season two, season-ender that deals with Clint and Nancy's unspoken feelings for each other.

Do you plan to produce any future morally redemptive TV or film projects? 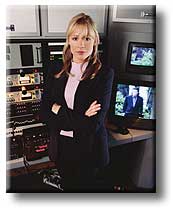 Funny you should ask. We have a new series that will be airing on PAX this fall, beginning October 13 in the Sunday, 9 P.M. time slot. (9 P.M. Eastern and Pacific—8 P.M. Central and Mountain), right after “Doc.” It's tentatively called “Lip Service,” although the name could change. It's inspired by the true story of Sue Thomas—a deaf woman who speaks and reads lips incredibly well—who goes to work for the FBI with her “hearing ear dog” Levi. It will have all the “Humor, Heart and Honesty” that “Doc” has, but, because we'll be doing an FBI case each week, it'll also have a certain amount of adventure. I'm sure I can safely say that anyone who likes “Doc” will also like this new show. I should also mention that the real Sue Thomas is now a Christian speaker who not only speaks at churches all over the country, but also schools, colleges, seminars, conventions, etc.

What do critics of “Doc” say about the show?

If by this question you mean "people who don't like 'Doc'", I really don't know the answer to that question because the response to the show has been so overwhelmingly positive. I suppose there are people who might think it's not "hip or edgy" to do a show that honors God and is appropriate for the whole family. But many of those people probably aren't our audience anyway. However, I know we do also reach a huge secular audience who are also fans of the show.

As the producers of “Doc”, what other television or film programming have you been inspired by?

Our favorite TV show of all time is "The Andy Griffith Show" hands down. We were also fans of "The Wonder Years" the old "Dick VanDyke Show", "Mary Tyler Moore". Also loved the movie Remember the Titans which I consider to be, by far, the best movie of last year.

Do you have any news you can share about upcoming episodes or character developments?

Lots more great things coming up in year three, which, by the way, starts September 15. Just keep watching and you won't be disappointed.