What and who is…
Elah 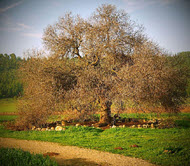 A terebinth tree growing in the Valley of Elah. Photo by David Bena (CC).

This is the name of a place and 4 biblical men.

On a mountain overlooking the Valley of Elah is where the Israelites were encamped when David killed Goliath, a famous giant of Gath (1 Samuel 17:2, 19).

“The terebinths from which the valley of Elah takes its name still cling to their ancient soil. On the west side of the valley, near Shochoh, there is a very large and ancient tree of this kind known as the ‘terebinth of Wady Sur,’ 55 feet in height, its trunk 17 feet in circumference, and the breadth of its shade no less than 75 feet. It marks the upper end of the Elah valley, and forms a noted object, being one of the largest terebinths in Palestine.” —John Cunningham Geikie, The Holy Land and the Bible: A Book of Scripture Illustrations gathered in Palestine, (1887, abridged edition: 1903)