What is a
mite

Also, what do Christ’s comments about the widow’s donation of 2 mites really mean? Misunderstanding about this biblical story is common.

“Mite” refers to something very small in size or value. This old English word is a contraction of the Latin word minutum, which is a translation of the Greek word λεπτὸν —transliterated: lepton (plural: λεπτά —lepta). 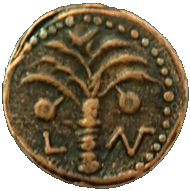 The lepton coin (a “mite”) was about the same diameter as a pencil eraser—about 6mm).

The lepton pictured above was minted by Caponius, the procurator of Judea installed by Rome in 6 AD, about 20 years or so before Pontius Pilate assumed control and handed Jesus over to the Jewish religious leaders.

In Christ’s day, the lepton, which the King James Bible refers to as a “mite,” was a very small coin and the lowest in value. They were minted in copper or bronze. An expert numatist has said that the ancient lepton “is probably the lowest denomination coin ever struck by any nation in all of history.”

The word “mite” appears 3 times in the King James Bible and NKJV. Most modern English translations prefer the word “cent,” which is a more appropriate term for our day.

In each verse above, the original Greek word is lepton or its plural lepta.

Value of a mite

In Roman times, 1 mite (lepton) was worth ⅛ of an assarius coin (aka as—plurals: assaria and asses) / Greek: ἀσσάριον —assarion).

Sparrows were quite inexpensive. At the time of Christ, 5 sparrows were sold for 2 assaria (Luke 12:6). That equals 16 lepta—a little over 3 lepta per bird—and the price was higher for a purchase of just 1 or 2 birds (see: SPARROW). Note that the widow’s 2 lepta would not buy a single sparrow.

2 mites = 1 quadrans (a very low value coin, translated farthing in the KJV). The quadrans (meaning quarter) was ¼ of an assarion.

“In modern Greece, lepton (modern form: lepto, λεπτό) is the name of the 1/100 denomination of all the official currencies of the Greek state: the phoenix… the drachma… and the euro (2002–current)… the name is the Greek form of ‘euro cent.’ …Since the late 1870s, and until the introduction of the euro in 2001, no Greek coin had been minted with a denomination lower than 5 lepta.” —“Greek lepton,” Wikipedia (9.8.2017)

It is said that the lepton had the following relative value in purchasing power in the 200s A.D. (the time of Roman Emperor Diocletian).

Assuming an average of 80 grapes per pound, the widow could buy 3 grapes in the 200s AD.

Relative value comparisons to the 21st century are very difficult, considering the great differences in society and economic practices. The main point of Scripture’s mention of the 2 lepton is NOT its relative economic value (although clearly very small), but rather that she gave ALL she had. Being God, Christ that this was the end of her funds, and He knew WHY she gave her last cent and what would happen to her later, but those details are not recorded. However, it seems fairly obvious that there was desperation involved.

Was Jesus pleased with what happened here—or was he angered?

About the widow’s offering—What was Christ’s main point about what occurred at the Temple?

This is not a parable; it really happened. It occurred at Herod’s Temple, just after Jesus finished teaching the people and had been confronted by its angry religious leaders who wanted to seize him there and murder him.

According to Luke, immediately BEFORE Jesus observed the widow’s donation and called the disciples’ attention to it, He said,

“Beware of the scribes, who like to walk around in long robes, and love respectful greetings in the market places, and chief seats in the synagogues and places of honor at banquets, who devour widows’ houses, and for appearance’s sake offer long prayers. These will receive greater condemnation.” —Luke 20:46-47 NASB (also Mark 12:38-40)

“Truly I say to you, this poor widow put in more than all the contributors to the treasury; for they all put in out of their surplus, but she, out of her poverty, put in all she owned, all she had to live on.”

As He was going out of the temple, one of His disciples said to Him,

And Jesus said to him,

“Do you see these great buildings? Not one stone will be left upon another which will not be torn down.” —Mark 12:41-13:2 NASB

Is this a lesson about sacrificial Christian giving?

No, not at all. Jesus knew the people’s donations would not be used for God’s purposes. The Temple was a sham. God did not dwell there, and the majority of the Jews did not truly worship or obey Him. Its leaders and the people no longer followed God’s truth; they created (and followed) a false religion adjusted to their liking. God took no delight in their offerings. He removed His presence from Jerusalem long before this Temple was built. The supposed Holy of Holies of Herod’s Temple contained nothing truly holy; the Ark of the Covenant and God’s presence was long gone. The nation was under God’s judgment, and had been for centuries. Until John the Baptist’s and Christ’s coming, He had totally withdrawn His holy prophets, all new revelation and miraculous signs from their midst for the past 400 years!

Now, these Temple leaders had stood face to face with the actual anointed Messiah, knowing the reality of His thousands of miraculous deeds proving His identity beyond any doubt, and they refused to bow to their King, or even acknowledge His identity—rather, they called Him the tool of Beelzebub. They were determined to assassinate Him.

In context, the widow’s mite event is primarily a comment about the results of the gross iniquity and self-serving deception and hypocrisy of the Jewish religious leaders of the time that preyed upon the vulnerable, even the poorest of the poor.

(If you are a widow reading this, do NOT do as this widow did—giving her last cent to ungodly deceivers who claim to speak for God.)

The Jews all had a responsibility before God to treat poor widows with kindness and help support them if needed; instead they squeezed money out of this widow based on false claims—perhaps promising good favor with God, avoidance of Divine judgment, and ultimate entry into Paradise. None of which was true.

These people’s evil would soon be strongly judged by God in 70 AD, when He brought about the COMPLETE DESTRUCTION of this fraudulent Temple complex—much as if it had been hit with a nuclear explosion. Simultaneously, the entire nation was completely dissolved for 2-thousand years.

Listen to 1 minute of Dr. John MacArthur’s comments on this passage in the context of false Christianity in our day…

Streaming video—
“What is the true meaning of the story of the poor widow’s offering of 2 mites?”
John F. MacArthur, Litt.D., D.D., Grace Community Church and The Master’s Seminary
Video by Grace to You
Length: 1 minutes

Modern misuse of the mite story

Sadly, slick modern false teachers, such as Benny Hinn, are still using the same ploys used by the sinful scribes and pharisees to gain money from the naive and vulnerable—most often elderly widows and the sick and desperate. The day I completed this article, I happened upon a signed article on Benny Hinn’s site that made my jaw drop at his polished brazen twisting of the record of the widow’s mite donation—all in an attempt to gain still more money for his organization. Fully ignoring Christ’s main point, he mixes his various fictions with the very sparse biblical record about the widow, and then says,

“…by…placing two seemingly insignificant coins in the treasury box… [she] secured the future for herself and her loved ones… prosperity… her amazing faith and the power of giving with a violent, unstoppable faith! Now it’s your time. …Give [me] what is in your hand… your time for favor has come… Donate now…”

He tells people that giving their money to him in “faith” will bring them multiplied PROSPERITY. Hinn and others like him convince people to believe their gift of cash to them is “seed money” which the giver will later harvest as greatly multiplied wealth. “The more money you give me, the more money God will give you.” None of this is biblical. It’s a scam. In the parable of the sower and the soils, Christ is not talking about money in any way (Luke 8:11-15). Seed is not a metaphor for money in the Bible.